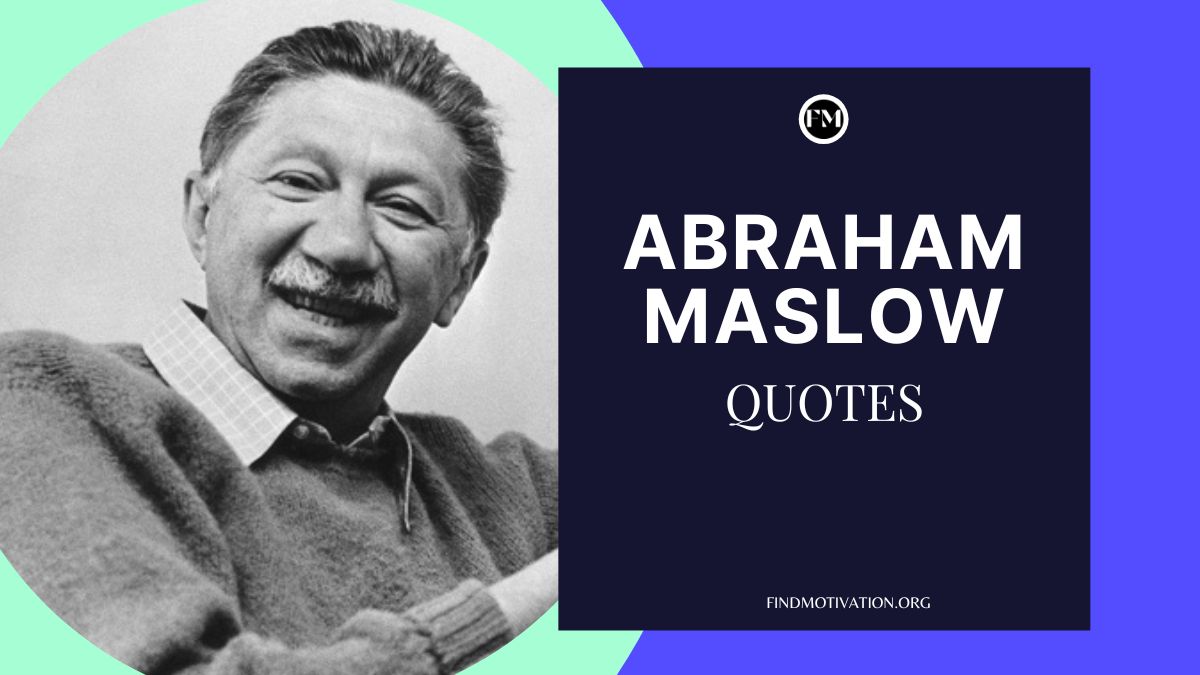 Find here the collection of some inspirational Abraham Maslow Quotes to help yourself to make some growth in your life.

American psychologist Abraham Harold Maslow developed the hierarchy of needs theory. Today he is remembered as one of the most influential psychologists in the world. He is best known for the theory of Hierarchy of needs, humanistic psychology, Peak experiences, and Self-actualization. He made many important contributions to the field of psychology.

Here are some inspirational Abraham Maslow Quotes about Education, growth, and self-actualization.

1. “What is necessary to change a person is to change his awareness of himself.” ― Abraham Maslow

3. “The sacred is in the ordinary…it is to be found in one’s daily life, in one’s neighbors, friends, and family, in one’s own backyard…travel may be a flight from confronting the scared–this lesson can be easily lost. To be looking elsewhere for miracles is to be a sure sign of ignorance that everything is miraculous.” ― Abraham Maslow

5. “If I were dropped out of a plane into the ocean and told the nearest land was a thousand miles away, I’d still swim. And I’d despise the one who gave up.” ― Abraham Maslow

6. “A first-rate soup is more creative than a second-rate painting.” ― Abraham Maslow

7. “In a word, growth, and improvement can come through pain and conflict.” ― Abraham Harold Maslow

8. “One can choose to go back toward safety or forward toward growth. Growth must be chosen again and again; fear must be overcome again and again.” ― Abraham Maslow

9. “Be independent of the good opinion of other people.” ― Abraham Maslow

10. “Life is an ongoing process of choosing between safety (out of fear and need for defense) and risk (for the sake of progress and growth). Make the growth choice a dozen times a day.” ― Abraham Maslow

11. “In any given moment we have two options: to step forward into growth or to step back into safety.” ― Abraham Maslow

12. “The most stable, and therefore, the most healthy self-esteem is based on deserved respect from others rather than on external fame or celebrity and unwarranted adulation.” ― Abraham Maslow

13. “Obviously the most beautiful fate, the most wonderful good fortune that can happen to any human being, is to be paid for doing that which he passionately loves to do.” ― Abraham Maslow

14. “Education can become a self-fulfilling activity, liberating in and of itself.” ― Abraham Maslow

15. “If you plan on being anything less than you are capable of being, you will probably be unhappy all the days of your life.” ― Abraham Maslow

16. “The most fortunate are those who have a wonderful capacity to appreciate again and again, freshly and naively, the basic goods of life, with awe, pleasure, wonder, and even ecstasy.” ― Abraham Maslow

17. “It seems that the necessary thing to do is not to fear mistakes, to plunge in, to do the best that one can, hoping to learn enough from blunders to correct them eventually.” ― Abraham Harold Maslow

18. “Dispassionate objectivity is itself a passion, for the real and for the truth.” ― Abraham Maslow

19. “Creativeness comes partly out of the unconscious, i.e., is a healthy regression, a temporary turning away from the real world.” ― Abraham Maslow

20. “What you don’t know has power over you; knowing it brings it under your control and makes it subject to your choice. Ignorance makes real choice impossible.” ― Abraham H. Maslow

Theory of human being Quotes by Abraham Maslow

21. “A musician must make music, an artist must paint, a poet must write if he is to be ultimately at peace with himself. What a man can be, he must be.” ― Abraham Maslow

22. “The great lesson is that the sacred is in the ordinary, that it is to be found in one’s daily life, in one’s neighbors, friends, and family, in one’s backyard.” ― Abraham Maslow

23. “If you deliberately plan to be less than you are capable of being, then I warn you that you’ll be deeply unhappy for the rest of your life. You will be evading your own capacities, your own possibilities.” ― Abraham H. Maslow

25. “We need not take refuge in supernatural gods to explain to our saints and sages and heroes and statesmen as if to explain our disbelief that mere unaided human beings could be that good or wise.” ― Abraham Maslow

26. “Let people realize clearly that every time they threaten someone or humiliate or unnecessarily hurt or dominate or reject another human being, they become forces for the creation of psychopathology, even if these be small forces. Let them recognize that every person who is kind, helpful, decent, psychologically democratic, affectionate, and warm, is a psychotherapeutic force, even though a small one.” ― Abraham H. Maslow

28. “Motivation theory is not synonymous with behavior theory. The motivations are only one class of determinants of behavior. While behavior is almost always motivated, it is also almost always biologically, culturally and situationally determined as well.” ― Abraham H. Maslow

29. “What a man can be, he must be. This need we call self-actualization.” ― Abraham Maslow

30. “Seeing is better than being blind, even when seeing hurts.” ― Abraham H. Maslow

31. “We all have everything we need within us to create our fullest potential.” ― Abraham H. Maslow

32. “It isn’t normal to know what we want. It is a rare and difficult psychological achievement.” ― Abraham Harold Maslow

33. “I can feel guilty about the past, apprehensive about the future, but only in the present can I act. The ability to be in the present moment is a major component of mental wellness.” ― Abraham Maslow

34. “Self-actualized people…live more in the real world of nature than in the man-made mass of concepts, abstractions, expectations, beliefs, and stereotypes that most people confuse with the world.” ― Abraham Maslow

35. “It looks as if there were a single ultimate goal for mankind, a far goal toward which all persons strive. This is called variously by different authors self-actualization, self-realization, integration, psychological health, individuation, autonomy, creativity, and productivity, but they all agree that this amounts to realizing the potentialities of the person, that is to say, becoming fully human, everything that person can be.” ― Abraham Maslow

36. “We fear our highest possibilities. We are generally afraid to become that which we can glimpse in our most perfect moments, under conditions of great courage. We enjoy and even thrill to godlike possibilities we see in ourselves in such peak moments. And yet we simultaneously shiver with weakness, awe, and fear before these very same possibilities.” ― Abraham Maslow

37. “I suppose it is tempting, if the only tool you have is a hammer, to treat everything as if it were a nail.” ― Abraham Maslow

38. “If you only have a hammer, you tend to see every problem as a nail.” ― Abraham Maslov

39. “To the man who only has a hammer, everything he encounters begins to look like a nail.” ― Abraham Maslow

40. “When the only tool you own is a hammer, every problem begins to resemble a nail.” ― Abraham Maslow

We hope you liked the above Abraham Maslow Quotes. Do not forget to mention your favourite line in the comment box below.

24 Best I Don’t Know Quotes to inspire you

32 Best Letting Go Quotes to move on in your life