‘Actions Speak Louder Than Words’ Quotes: Prove Yourself by Deeds 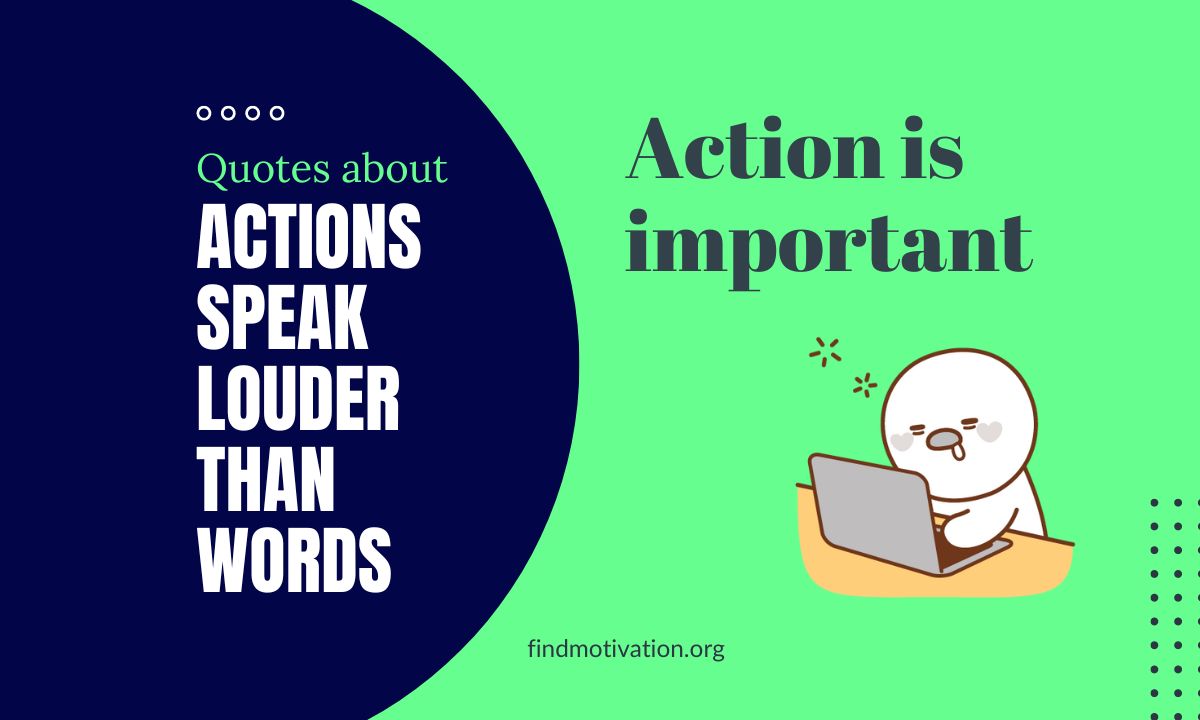 You can also read our other motivational quotes on proverbs such as Honesty is The Best Policy and Practice Makes Perfect.

1. “Actions speak louder than words, and a smile says, ‘I like you. You make me happy. I am glad to see you.” ― Dale Carnegie

2. “It has been noted that actions speak louder than words. Truth is, I have found that during many situations in life, words are just noise… and actions are the ONLY things that speak.” ― Steve Maraboli

3. “Let your actions speak louder than words, however: professionalism matters, while popularity is illusory, fleeting, and short-lived. Your contributions to the field, by enhancing service, creating new models to replace outdated practice, and quietly working to improve communities, matter most.” ― Michael Stephens

5. “If you want to know what people mean by what they say, watch what they do. Actions don’t only speak louder than words; actions should be used to interpret words.” ― Andy Stanley

6. “Dreams and hope won’t get you anywhere; only actions do; actions create results.” ― Anas Hamshari

7. “Do not teach children about the meaning of inspiration. Lead by example and show them first hand. Actions speak louder than words.” ― Dee Waldeck

8. “The world can only be grasped by action, not by contemplation. The hand is the cutting edge of man.” ― Jacob Bronowski

9. “Actions speak louder than words, so you want to find out what his actions say about his feelings towards you. If he is easily willing to come to your aide on a consistent basis, this is proof he genuinely cares for you.” ― Kara King

10. “If we don’t fight for what we ‘stand for’ with our passionate words and honest actions, do we really ‘stand’ for anything?” ― Tiffany Madison

11. “Lips and tongues lie. But actions never do. No matter what words are spoken, actions betray the truth of everyone’s heart.” ― Sherrilyn Kenyon

12. “If your actions don’t live up to your words, you have nothing to say.” ― DaShanne Stokes

14. “Be less generous with your advice: live it instead. It is a bad situation when someone with a coughing fit attempts to sell a cough mixture. After all, action speaks far louder than words; living the example is the best advice you can ever give. Only examples have children.” ― Nana Awere Damoah

15. “Actions speak louder than words. We can apologize over and over, but if our actions don’t change, the words become meaningless.” ― Golden Flower

16. “Words. I have realized that words don’t mean much. Actions do speak louder than words. One can lie and utter any damn lines to soften a girl up…but actions…actions can move mountains.” ― Pamela Ann

17. “Actions speak louder than words. In the days to come the Goddess of Victory will bestow her laurels only on those who prepared to act with daring.” ― Heinz Guderian

18. “Our life is a reflection of our values and priorities. Who we think we are and who we actually are may be very different, and depends on how honest our Ego allows us to be with ourselves. This is why our choices and actions speak louder than any of our thoughts and words ever will.” ― Evita Ochel

19. “Your actions speak louder than your words. Be the example, don’t just speak it.” ― Melissa Ambrosini

20. “Energy and actions speak louder than words. If you are really present with a horse, or a human for that matter, you come to realize that words really aren’t that necessary.” ― Carly Kade

22. “Action speaks louder than words but not nearly as often.” ― Mark Twain

23. “If actions speak louder than words, I’m the most deafening noise you’ve heard. I’ll be that ringing in your ears that will stick around for years” ― Touche Amore

24. “If you are of the opinion that the contemplation of suicide is sufficient evidence of a poetic nature, do not forget that actions speak louder than words.” ― Fran Lebowitz

25. “The more deeper you think, the more silent you become. You understand the reasons behind the reason. It may not necessarily mean you are short of words. You however know what ignorance can trigger and how to deal with ignorance and purpose. The timeliness of your word is surely on point.” ― Ernest Agyemang Yeboah

26. “Talking about peace is not enough. Each of us individually needs to live a lifestyle that promotes peace, good will, and love in everything that we do. Actions speak louder than words. If you do not actually live a life that benefits the Earth and its inhabitants, then you are part of the reason why our planet is dying.” ― Joseph P. Kauffman

27. “Kindness is not about words. It isn’t spoken. It is about action. Kindness is a deed.” ― Anthon St. Maarten

28. “The only thing that matters in the business world are deliverables. Walk the talk, and your actions will produce the respect that you desire.” ― Germany Kent

29. “Actions speak louder than words, and a smile says, ‘I like you. You make me happy. I am glad to see you.’ That is why dogs make such a hit. They are so glad to see us that they almost jump out of their skins. So, naturally, we are glad to see them.” ― Dale Carnegie

30. “Words have less substance than air. Don’t tell me about your zealous dreams, your firm convictions, your profound love―show me.” ― Richelle E. Goodrich

32. “Actions speak louder than words, in fact. When we don’t take action, we foster the mistaken reality of our old identity.” ― Eric Samuel Timm

26 ‘Honesty is The Best Policy’ Quotes: Is Honesty Always Right?