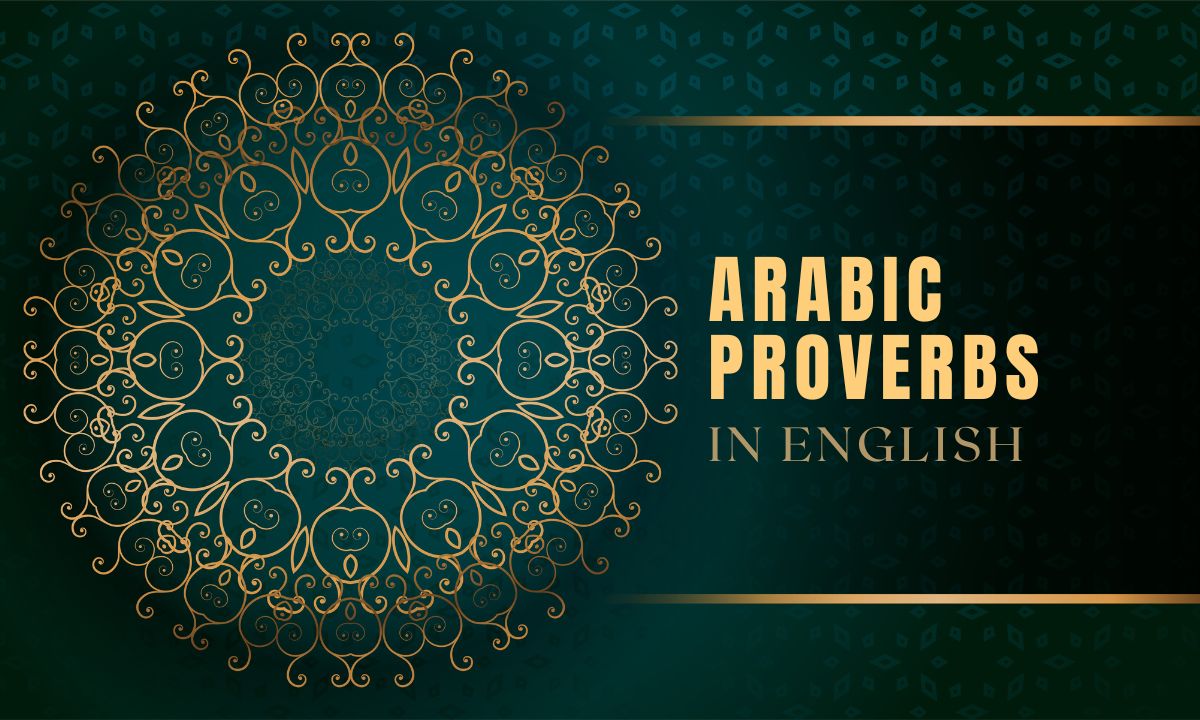 Arabic proverbs have been passed down through generations in Arab cultures and have become a staple in their language and literature. These proverbs often convey wisdom, morals, and cultural values through clever and concise phrases. Many Arabic proverbs are rooted in the rich history and traditions of the Arab world and provide insight into the thought processes and ways of life of the people who speak them. From the desert sands of the Middle East to the bustling cities of North Africa, Arabic proverbs are used in everyday conversation and hold a special place in the hearts of those who speak the language. Let’s read some Arabic proverbs and sayings in English.

You can also read some other proverbs and sayings such as Greek proverbs, Turkish proverbs, and Spanish proverbs.

1. A foolish man may be known b six things: anger without cause, speech without profit, change without progress, inquiry without object, trusting a stranger, and mistaking foes for friends.

2. A heart free from care is better than a full purse.

A heart free from care is better than a full purse.

4. A known mistake is better than an unknown truth.

5. A little spark can kindle a great fire.

6. A mother’s heart is a child’s school.

7. A paradise without people is not worth stepping foot in.

A paradise without people is not worth stepping foot in.

8. A pebble can support a barrel.

9. A secret is like a dove: when it leaves my hand it takes wings.

10. A sense of humor is the pull that adds balance to our steps as we walk the tightrope of life.

11. A thousand cranes in the air are not worth one sparrow in the fist.

12. A thousand raps at the door, but no salute or invitation from within.

14. A word to the wise is sufficient.

A word to the wise is sufficient.

16. Always bear in mind that your own resolution to succeed is more important than any other.

17. Anger begins with madness, but ends in regret.

18. Another man’s bread will not fill your belly.

20. Arrogance is a weed that grows mostly on a dunghill.

21. Ask the experienced rather than the learned.

22. Ask your purse what you should buy.

23. At the close of the night, cries are heard.

At the close of the night, cries are heard.

24. Avoid the company of liars, but if you can’t don’t believe them.

25. Avoid things that will require an apology.

26. Be patient and you’ll get what you want.

27. Be the change you want to see in the world.

28. Be wary around your enemy once, and your friend a thousand times. A double-crossing friend knows more about what harms you.

29. Being alone is better than being with someone bad.

30. Believe what you see and lay aside what you hear.

Believe what you see and lay aside what you hear.

31. Beware of him to whom you have been charitable.

33. Choose your neighbour before your house and your companion before the road.

34. Close the door that brings in the wind and relax.

35. Determination is the key to everything.

36. Discipline your son when he’s young and be his friend when he’s grown.

38. Do not delay today’s work for tomorrow.

39. Do not eat your bread on somebody else’s table.

40. Do not feel lonely; the entire universe is inside you.

Do not feel lonely; the entire universe is inside you.

41. Down does not come twice to awaken a man.

43. Everyone is critical of the flaws of others, but blind to their own.

44. Examine what is said, not he who speaks.

45. Experimentation is the greatest science.

47. Fire only burns he who approaches it.

48. Forgetting is the plague of knowledge.

50. Give your friends your money and your blood, but don’t justify yourself. Your enemies won’t believe it and your friends won’t need it.

Go with the lesser of two evils.

52. Good health is a crown worn by the healthy that only the ill can see.

53. Good qualities never cancel out the bad, just as sugar is no antidote for poison.

54. He is hump-backed, yet whirls about.

56. He whose house is made of glass should not throw stones.

57. If God proposes the destruction of an ant, he allows wings to grow upon her.

58. If speaking is of silver, then silence is of gold.

59. If the water comes like a deluge, place thy son under thy feet.

61. If thou seest Mm reproaching and swearing at him, know that he loves him.

62. If thy neighbor dislikes thee, change the gate of thy house.

If thy neighbor dislikes thee, change the gate of thy house.

63. If you are charitable, you are rich.

64. If you have an opinion, you better be determined.

66. If you’re unable to reward, then make sure to thank.

67. In haste there is regret, but in patience and care there is peace and safety.

68. It does not matter how slowly you go as long as you do not stop.

70. It’s better to avoid mistakes altogether than to do something you need to apologize for later.

71. It’s better to fix what you have than wait to get what you don’t have.

It’s better to fix what you have than wait to get what you don’t have.

72. Jealousy is nothing more than a fear of abandonment.

73. Keeping a secret is a commitment.

74. Lack of intelligence is the greatest poverty.

75. Laugh and the whole world laughs with you; cry and you cry alone.

76. Lovers don’t finally meet somewhere. they’re in each other all along.

78. Mistrust before your trust.

79. Necessity is the mother of invention.

80. One coin in the money box makes more noise than when it is full.

81. One will not attain everything one wishes for. the winds blow where they will, not where the ships wish.

83. Planning is half of living.

84. Play with a slave, he will show to thee his hinder parts.

85. Put distance between you and everything dirty.

86. Reached the goal and spent the night in the desert.

88. Speaking is not seeing.

89. The absence may have an excuse.

90. The best answer comes from a person who is not angry.

91. The fruit of silence is tranquility.

94. The monkey is a gazelle in the eyes of its mother.

The monkey is a gazelle in the eyes of its mother.

95. The mouth should have three gatekeepers: is it true? is it kind? is it necessary?.

96. The purest people are the ones with good manners.

99. The saddest person is an envious person.

101. The ultimate remedy is cautery.

102. The wisest person is the one who can forgive.

103. The world is like a belly dancer; it dances for a little while for everyone.

104. There are no shortcuts to any place worth going.

105. There is no greater misfortune than your own.

There is no greater misfortune than your own.

106. Think of your exit before you enter.

107. Tomorrow is close if you have patience.

108. Visit rarely and you will be loved more.

109. We have one mouth and two ears for a reason: we need to listen more than we speak.

111. Whatever is forbidden is desired.

113. When the angels present themselves, the devils abscond.

114. Whoever gets burned by soup, blows on the yogurt.

117. You can never cross the ocean until you have the courage to lose sight of the shore.

119. You will know your friend in time of need.

Image by starline on Freepik

Grammar vs Syntax: Differences Between Grammar and Syntax