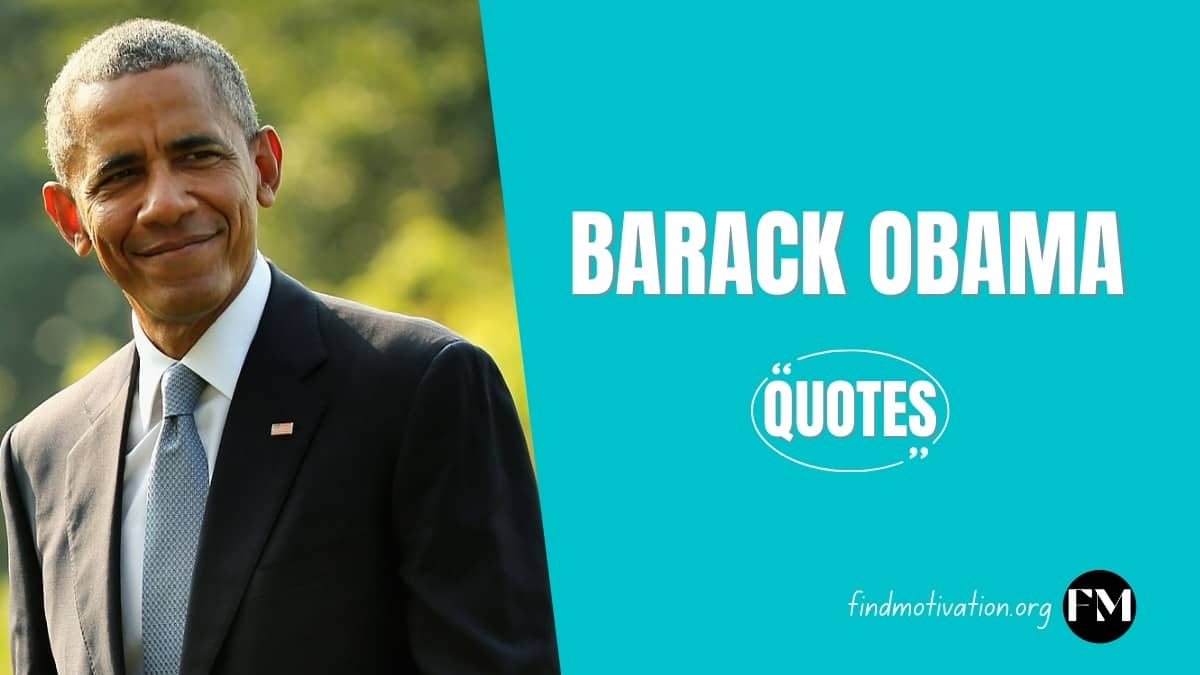 Read here Powerful quotes said by Barack Obama that will help you to find the motivation to change yourself.

Who is Barack Obama?

Barack Obama was born on 4th August 1961 in Honolulu, Hawaii. He graduated from Columbia University and Harvard Law School, where he was president of the Harvard Law Review. After serving on the Illinois State Senate, he was elected a U.S. senator representing Illinois in 2004. In 2008, he was nominated by the Democratic Party for president against Hillary Clinton and he was elected in the general election and became president on January 20, 2009. Nine months later, he was honored with Nobel Peace Prize.

Bring change in yourself

“A change is brought about because ordinary people do extraordinary things.” ― Barack Obama

Your voice can change the world

“Nothing can stand in the way of the power of millions of voices calling for change.” ― Barack Obama

Do not wait for good things

“Don’t wait for good things to happen to you. If you go out and make some good things, then it happens to you.” ― Barack Obama

Get up and do something

“The best way to not feel hopeless is to get up and do something. You will fill the world with hope, you will fill yourself with hope.” ― Barack Obama

“I’m inspired by the people I meet in my travels–hearing their stories, seeing the hardships they overcome, their fundamental optimism and decency.” ― Barack Obama

How to make progress?

How to be a good father?

“Any fool can have a child. That doesn’t make you a father. It’s the courage to raise a child that makes you a father.” ― Barack Obama

The true meaning of religious freedom

“Religious freedom doesn’t mean you can force others to live by your own beliefs.” ― Barack Obama

“Focusing your life solely on making a buck shows a poverty of ambition. It asks too little of yourself. And it will leave you unfulfilled.” ― Barack Obama

“If you run you stand a chance of losing, but if you don’t run you’ve already lost.” ― Barack Obama

“We may not be able to stop evil in the world, but how we treat one another is entirely up to us.” ― Barack Obama

How to make your mark in the world?

“Making your mark on the world is hard. If it were easy, everybody would do it. It takes patience, it takes commitment, and it comes with plenty of failures along the way.” ― Barack Obama

“Hope is that thing inside us that insists, despite all evidence to the contrary, that something better awaits us if we have the courage to reach for it, and to work for it, and to fight for it.” ― Barack Obama

“Hope is the belief that destiny will not be written for us, but by us, by the men and women who are not content to settle for the world as it is, who have the courage to remake the world as it should be.” ― Barack Obama

What is the meaning of Truth?

“Truth isn’t about who yells the loudest, but who has the right information.” ― Barack Obama

“There is no excuse for not trying.” ― Barack Obama

“Each path to knowledge involves different rules and these rules are not interchangeable.” ― Barack Obama

“Reading is important. If you know how to read then the whole world opens up to you.” ― Barack Obama

“Money is not only the answer, but it makes a difference.” ― Barack Obama

Final Words: Barack Obama’s thoughts will help you to grow yourself. I hope you liked the above Barack Obama Quotes. Don’t forget to mention the best line that you liked most from the above lines in the comment box below.

10 Neil Armstrong Quotes to help you to value yourself