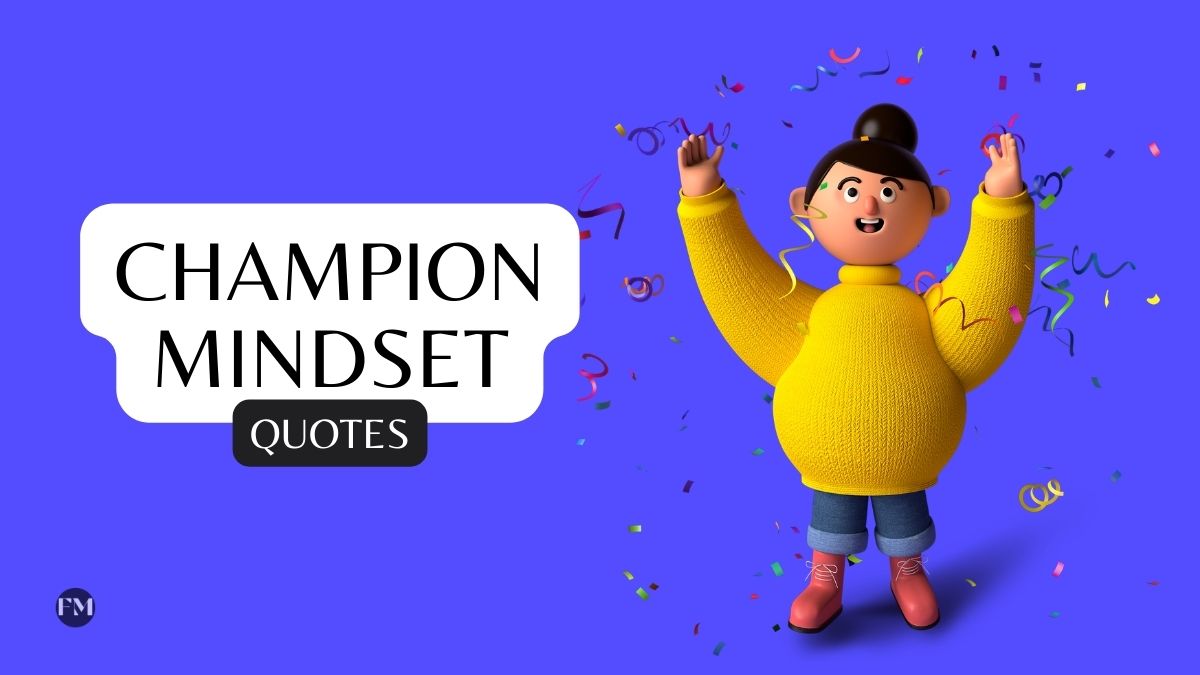 What is a champion mindset?

A champion mindset is a thought process that encourages you to have a winning mindset. It is the thought of never stopping, never giving up, never losing confidence, and making continuous efforts.

How does Champion Mindset help you?

One who has a champion mindset, that person cannot sleep until he fulfills his dream. It always keeps you active and is a continuous effort’s power source.

Who is a true champion?

1. “A champion needs a motivation above and beyond winning.” ― Pat Riley

3. “Never stop, never give up, never stop giving yourself the self-confidence you need to be a champion.” ― Diego Sanchez

4. “To be a champion, you have to learn to handle stress and pressure. But if you’ve prepared mentally and physically, you don’t have to worry.” ― Harvey Mackay

6. “It is not over. Champions extend their limits and make things happen.” ― Amit Ray

7. “Once your mindset changes, everything on the outside will change along with it.” ― Steve Maraboli

8. “I am a dreamer. And what I dream of is to become an Olympic champion, world champion, and world record holder.” ― Caster Semenya

9. “The biggest game you will ever play is the game in your mind. Master your mind, master your world.” ― Kevin Abdulrahman

10. “When you get stronger everything in the world gets easier. Change yourself and you’ve changed everything.” ― Hunter Post

11. “A true champion is a true champion. They go fight and win or lose, give it they’re all.” ― Glover Teixeira

12. “A true champion can adapt to anything.” ― Floyd Mayweather, Jr.

13. “Every champion was once a challenger.” ― Luke Campbell

14. “Balance provides the chance for longevity. You can be a champion at work and at home.” ― Tony Dungy

17. “My goal is to be the undisputed Heavyweight Champion of the World.” ― Evander Holyfield

20. “Be very strong… be very methodical in your life if you want to be a champion.” ― Alberto Juantorena

21. “A true champion is one who sweats from exhaustion when no one is watching.” ― Bas Rutten

Quotes about being champion

22. “What does it take to be a champion? Desire, dedication, determination, concentration and the will to win.” ― Patty Berg

23. “I believe I have the attitude of a champion and a winner, and I’m not apologetic for it.” ― Jon Jones

25. “My dream as a child was to be a world champion.” ― Charles Leclerc

26. “To become a champion, think you are the best and act relentlessly on improving.” ― Debasish Mridha

27. “People admire champions because they make life look easy… so work hard and be a champion!” ― Uzoma Nnadi

29. “I’ve always been working just to be a world champion and it’s a dream come true.” ― Yohan Blake

30. “Winning is great, sure, but if you are really going to do something in life, the secret is learning how to lose. Nobody goes undefeated all the time. If you can pick up after a crushing defeat, and go on to win again, you are going to be a champion someday.” ― Wilma Rudolph

31. “There’s always the motivation of wanting to win. Everybody has that. But a champion needs, in his attitude, a motivation above and beyond winning.” ― Pat Riley

32. “Opportunity doesn’t make appointments, you have to be ready when it arrives.” ― Tim Fargo

33. “A winning mindset can transform an underdog into a champion, conqueror, and achiever. You’re a mindset away from winning your battles!” ― Assegid Habtewold

34. “I don’t want to be remembered as a beaten champion.” ― Rocky Marciano

36. “For every champion, after you win the belt, you want to defend it as many times as possible.” ― Demetrious Johnson

38. “There’s a difference between thinking you are a champion and knowing that you are.” ― Matthew McConaughey

39. “The world is starving for new ideas and great leaders who will champion those ideas.” ― Lisa Su

41. “Champions realize that defeat – and learning from it even more than from winning – is part of the path to mastery.” ― Rasheed Ogunlaru

42. “Open the window of your mind. Allow the fresh air, new lights, and new truths to enter.” ― Amit Ray

43. “To be a champion requires more than simply being a strong player; one has to be a strong human being as well.” ― Anatoly Karpov

45. “A champion owes everybody something. He can never pay back for all the help he got, for making himself an idol.” ― Jack Dempsey

46. “There are people that tried to celebrate when I lost that got nothing to do with it. That’s not the sign of a champion.” ― Conor McGregor

47. “The target for every great champion is to play for the team.” ― Antonio Conte

49. “Who you are tomorrow begins with what you do today.” ― Tim Fargo

50. “It is only our dedication towards our passion that distinguishes a champion from the crowd.” ― Abhijit Naskar

51. “Every challenge is a chance to become a champion.” ― Ifeanyi Enoch Onuoha

55. “I would like to become a champion, but I’m realistic about it.” ― David Leslie

56. “People still look at me as the champion and that’s very important to me.” ― Marvin Hagler

I hope you liked the above Champion Mindset Quotes. You may also like the motivational articles mentioned below:

66 Entrepreneur Mindset Quotes to take risks for your dream