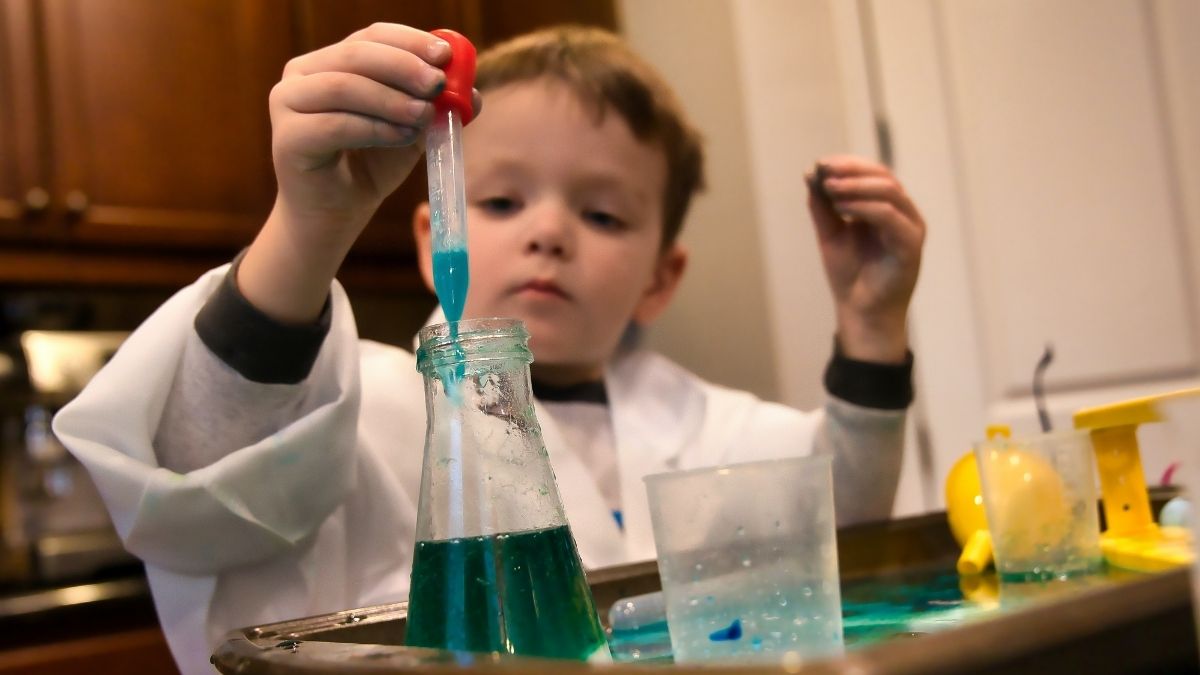 Find here the collection of some funny, hilarious chemistry jokes for kids, adults, teens, and of all ages of children. These jokes are shared here to make you laugh. Because laughing creates a positive impact on you physically and mentally.

1. A neutron walks into a bar and asks the bartender how much a drink costs. “For you, no charge.”

2. A neutron walks into a restaurant and orders a drink.  As she is about to leave, she asks the waiter how much she owes.  The waiter replies, “For you, No Charge!!!”

3. A sign outside the chemistry hotel reads: “Great Day Rates, Even Better NO3- ‘s”

4. Anyone know any jokes about sodium? Na

5. Carbon and hydrogen went on a date. I heard they really bonded

6. Did you hear about the chemist who was reading a book about Helium? He just couldn’t put it down.

7. Did you hear oxygen went on a date with potassium? It went OK!

8. Did you hear that oxygen proposed to magnesium? OMg!

9. Gold is the best element because it’s AU-some.

11. How often should you tell a chemistry joke? Periodically.

12. I asked the guy sitting next to me if he had any Sodium Hypobromite… He said NaBrO.

13. I can’t remember that element, but it’s on the tip of my tungsten.

16. I wish I was adenine. Then I could get paired with U.

20. The proton is not speaking to the other proton, he’s mad atom.

23. What do you call an acid with an attitude? A-mean-o Acid

24. What element derives from a Norse god? Thorium.

25. What element is a girl’s future best friend? Carbon.

26. What should do you do with a dead Chemist? Barium!

27. What show do cesium and iodine love to watch together? CsI

28. What was Avogadro’s favorite sport? Golf, because he always got a mole-in-one.

29. Why can you never trust an atom? They make up literally everything.

30. Why did the white bear dissolve in water? Because it was polar!

31. I think these jokes are sodium funny. In fact, I slapped my neon that one!

32. I’m sorry I’m late! I was reading a book on helium and I just could not put it down.

35. How about the chemical workers… are they unionized?

36. How did the hipster chemist burn his hand on the beaker? He picked it up before it was cool.

37. I have many chemistry jokes but I’m afraid they won’t get a good reaction.

38. I think these jokes are sodium funny. In fact, I slapped my neon on that one!

39. I want to write some jokes about the periodic table… But I don’t think I’ll be in my element.

43. The entire lab smelled like rotten eggs. Everyone was sulfering.

46. Wait, are all these jokes too basic for you? Because I see no reaction.

47. Want to hear a joke about nitrogen oxide? NO!

48. We’d give you some more chemistry jokes, but all the good ones argon.

49. What did the man say when his girlfriend threw sodium and chloride at him? That’s as-salt!

50. What did the man say when his girlfriend threw sodium and chloride at him? That’s as-salt!

51. What did the scientist say when he found 2 isotopes of helium? HeHe.

52. What did the thermometer say to the graduated cylinder? “You may have graduated, but I’ve got many degrees.”

53. What do chemists call a benzene ring with iron atoms replacing carbon atoms? A ferrous wheel.

54. What do you call a 2000-pound chemistry professor who’s always smiling? A pro-ton.

56. What do you call acid with an attitude? A-mean-o Acid.

57. What do you call two diamonds out on the town? Carbon dating.

58. What do you do with a dead chemist? Barium.

59. What do you do with a sick chemist? If you can’t helium, and you can’t curium, then you might as well barium!

60. What emotional disorder does a gas chromatograph suffer from? Separation anxiety.

61. What happens when Silver Surfer and Iron Man team up? They become instant alloys.

62. What happens when you lower your body temperature to -273°C? Nothing, you’re perfectly 0K!

64. What is the chemical formula for seawater? CH2O!

65. What is the most important rule in chemistry? Never lick the spoon!

66. What kind of dogs do chemists have? Laboratory Retrievers.

68. What kind of weapon can you make out of Potassium, Nickel, and Iron? A KNiFe.

70. Why are chemists great for solving problems? Because they always have a solution!

71. Why can you never trust atoms? They make up everything!

72. Why do chemists like nitrates so much? They’re cheaper than day rates!

73. Why do chemists love club music? They love when the base drops.

74. Why does a hamburger have less energy than a steak? Because it’s in the ground state!

75. Why should you go drinking with neutrons? Because wherever they go, there’s no charge!

76. Why was the mole of oxygen molecules excited when he left the singles bar? Because he got Avogadro’s number!