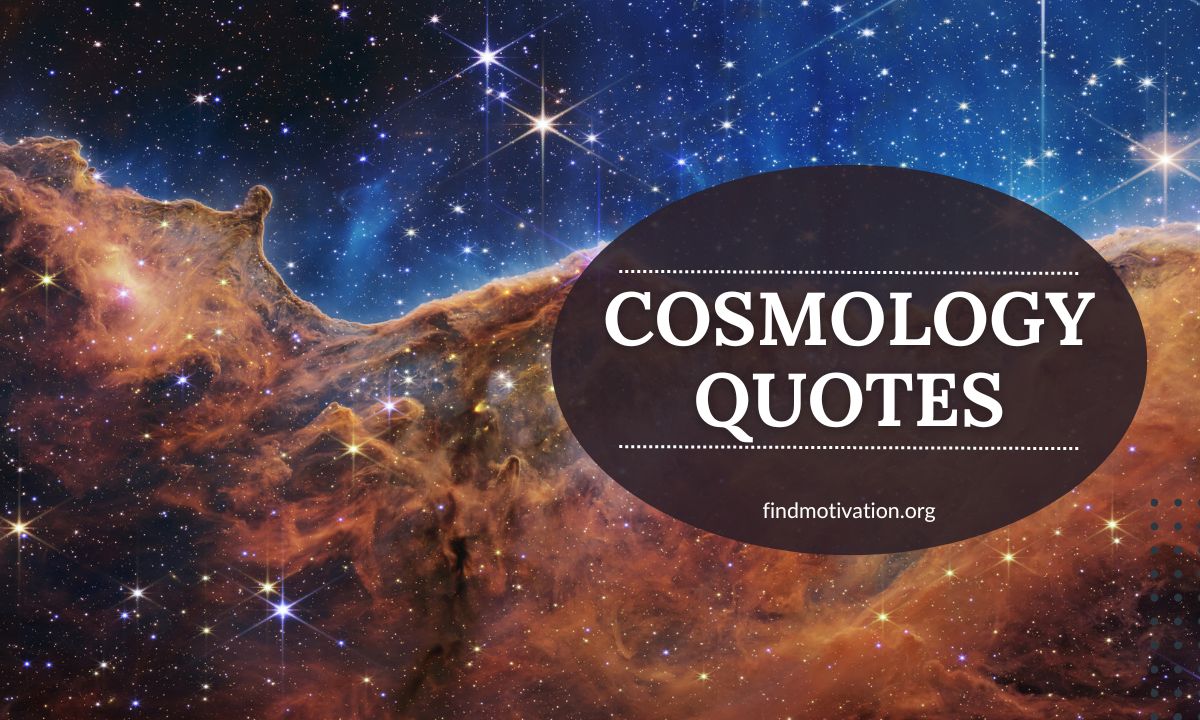 Cosmology is the branch of science that deals with the study of the origins, structure, and evolution of the universe. It is a fascinating field that has captivated scientists and philosophers for centuries, leading to many profound and thought-provoking quotes. From the ancient Greek philosopher Aristotle, who believed that the universe was eternal, to modern scientists like Stephen Hawking and Carl Sagan, cosmology has inspired some of the most profound and inspiring quotes about our place in the cosmos. These cosmology quotes offer a glimpse into the minds of some of the greatest thinkers of our time and offer a glimpse into the wonder and mystery of the universe.

You can also read other motivational quotes such as alone quotes and warrior quotes.

Cosmology Quotes on the Universe

1. “Something deeply hidden had to be behind things.” ― Albert Einstein

2. “Cosmology is a science which has only a few observable facts to work with.” ― Robert Woodrow Wilson

3. “There should be no boundary to human endeavor.” ― Stephen Hawking

5. “For me, it is far better to grasp the Universe as it really is than to persist in delusion, however satisfying and reassuring.” ― Carl Sagan

6. “The Hindu religion is the only one of the world’s great faiths dedicated to the idea that the Cosmos itself undergoes an immense, indeed an infinite, number of deaths and rebirths. It is the only religion in which the time scales correspond to those of modern scientific cosmology. Its cycles run from our ordinary day and night to a day and night of Brahma, 8.64 billion years long. Longer than the age of the Earth or the Sun and about half the time since the Big Bang.” ― Carl Sagan, Cosmos

7. “The total amount of energy from outside the solar system ever received by all the radio telescopes on the planet Earth is less than the energy of a single snowflake striking the ground.” ― Carl Sagan

8. “Science cuts two ways, of course; its products can be used for both good and evil. But there’s no turning back from science. The early warnings about technological dangers also come from science.” ― Carl Sagan

9. “There is something stunningly narrow about how the Anthropic Principle is phrased. Yes, only certain laws and constants of nature are consistent with our kind of life. But essentially the same laws and constants are required to make a rock. So why not talk about a Universe designed so rocks could one day come to be, and strong and weak Lithic Principles? If stones could philosophize, I imagine Lithic Principles would be at the intellectual frontiers.” ― Carl Sagan

11. “I would suggest that science is, at least in my part, informed worship.” ― Carl Sagan

12. “We have examined the universe in space and seen that we live on a mote of dust circling a humdrum star in the remotest corner of an obscure galaxy. And if we are a speck in the immensity of space, we also occupy an instant in the expanse of ages.” ― Carl Sagan

13. “Ultimate Reality is itself multiplicity, diversity. It is a waste of energy to strive to explain the world and its origin, which only diverts us from the essential Experience.” ― Jean Klein

14. “We live on a hunk of rock and metal that circles a humdrum star that is one of 400 billion other stars that make up the Milky Way Galaxy which is one of the billions of other galaxies which make up a universe which may be one of a very large number, perhaps an infinite number, of other universes. That is a perspective on human life and our culture that is well worth pondering.” ― Carl Sagan

15. “Individual events. Events beyond the law. Events so numerous and so uncoordinated that flaunting their freedom from the formula, they yet fabricate firm form.” ― John Archibald Wheeler

16. “The role played by time at the beginning of the universe is, I believe, the final key to removing the need for a Grand Designer, and revealing how the universe created itself. … Time itself must come to a stop. You can’t get to a time before the big bang, because there was no time before the big bang. We have finally found something that does not have a cause because there was no time for a cause to exist. For me, this means there is no possibility of a creator because there is no time for a creator to have existed. Since time itself began at the moment of the Big Bang, it was an event that could not have been caused or created by anyone or anything. … So when people ask me if a god created the universe, I tell them the question itself makes no sense. Time didn’t exist before the Big Bang, so there is no time for God to make the universe in. It’s like asking for directions to the edge of the Earth. The Earth is a sphere. It does not have an edge, so looking for it is a futile exercise.” ― Stephen W. Hawking

17. “We have developed from the geocentric cosmologies of Ptolemy and his forebears, through the heliocentric cosmology of Copernicus and Galileo, to the modern picture in which the earth is a medium-sized planet orbiting around an average star in the outer suburbs of an ordinary spiral galaxy, which is itself only one of about a million galaxies in the observable universe.” ― Stephen Hawking

18. “There cannot be a language more universal and more simple, freer from errors and obscurities…more worthy to express the invariable relations of all natural things [than mathematics]. [It interprets] all phenomena by the same language as if to attest the unity and simplicity of the plan of the universe, and to make still more evident that unchangeable order which presides over all natural causes.” ― Joseph Fourier

19. “If physics and cosmology are truly sciences, then there exists a body of excellent evidence that the scale and the varieties of Being vastly exceed anything an earlier generation could have imagined. This persuades me that reasoning about ultimate things cannot be based on the anomalous fragment of reality accessible to our awareness.” ― Marilynne Robinson

20. “I’m trying to understand cosmology, why the Big Bang had the properties it did. And it’s interesting to think that connects directly to our kitchens and how we can make eggs, how we can remember one direction of time, why causes precede effects, and why we are born young and grow older. It’s all because of entropy increasing.” ― Sean M. Carroll

21. “Evolutionary cosmology formulates theories in which a universe is capable of giving rise to and generating future universes out of itself, within black holes or whatever.” ― Robert Nozick

22. “For me, science is already fantastical enough. Unlocking the secrets of nature with fundamental physics or cosmology or astrobiology leads you into a wonderland compared with which beliefs in things like alien abductions pale into insignificance.” ― Paul Davies

23. “General relativity is the cornerstone of cosmology and astrophysics. It has also provided the conceptual basis for string theory and other attempts to unify all the forces of nature in terms of geometrical structures.” ― Paul Davies

24. “The main reason why people should care about research in fundamental physics is the same reason they care about astronomy and cosmology. People, children, want to know what we’re made out of, how it works, and why the universe is the way it is.” ― David Gross

25. “The scientific-rational mindset is as much a cosmology as the Catholic mindset was in the Middle Ages; scientists are so proud of their mindset and convinced that it’s the only reality. I find that worrying.” ― Mark Rylance

Some FAQs about cosmology

What is the difference between cosmology and astronomy?

Astronomy is the scientific study of celestial objects, such as stars, planets, galaxies, and the universe as a whole. Astronomers use telescopes and other instruments to observe the sky and gather data about the objects they study. Cosmology, on the other hand, is the study of the origin, structure, and evolution of the universe as a whole. Cosmologists use the data and observations gathered by astronomers, as well as theoretical models, to understand the large-scale structure and history of the universe.

What is cosmology theory?

Cosmology theory refers to the theoretical models and frameworks that are used to understand the origin, structure, and evolution of the universe. These theories are based on a wide range of observational data and theoretical principles and are used to explain various aspects of the universe, such as its overall shape and size, the distribution of matter and energy, and the nature of dark matter and dark energy.

What is cosmology philosophy?

Who is the father of cosmology?

Acharya Kapil is considered the father of cosmology in Indian philosophy, specifically in Sankhya philosophy. He is considered to have been born in 3000 BCE and is believed to have been the son of the sage Kardam and Devhuti. He is credited with founding the Sankhya school of thought and for his pioneering work on the nature and principles of the ultimate Soul (Purusha), primal matter (Prakruti), and creation.

Who is a famous cosmologist?

Stephen Hawking is one of the most famous cosmologists of the 20th and 21st centuries. He was a theoretical physicist, cosmologist, and author. He made significant contributions to our understanding of black holes and the origins of the universe through his research and publications. He is also well-known for his best-selling book “A Brief History of Time,” which introduced complex cosmological concepts to a general audience. He was also a scientist with a disability, he was diagnosed with ALS (Amyotrophic Lateral Sclerosis) a form of motor neuron disease that left him paralyzed and unable to speak except through a voice synthesizer. He passed away in 2018.

Is there Math in cosmology?

Yes, math plays a crucial role in cosmology. Cosmology is a highly quantitative field, and mathematical models and simulations are essential for understanding the behavior of the universe on different scales and at different times in its history.

‘Actions Speak Louder Than Words’ Quotes: Prove Yourself by Deeds