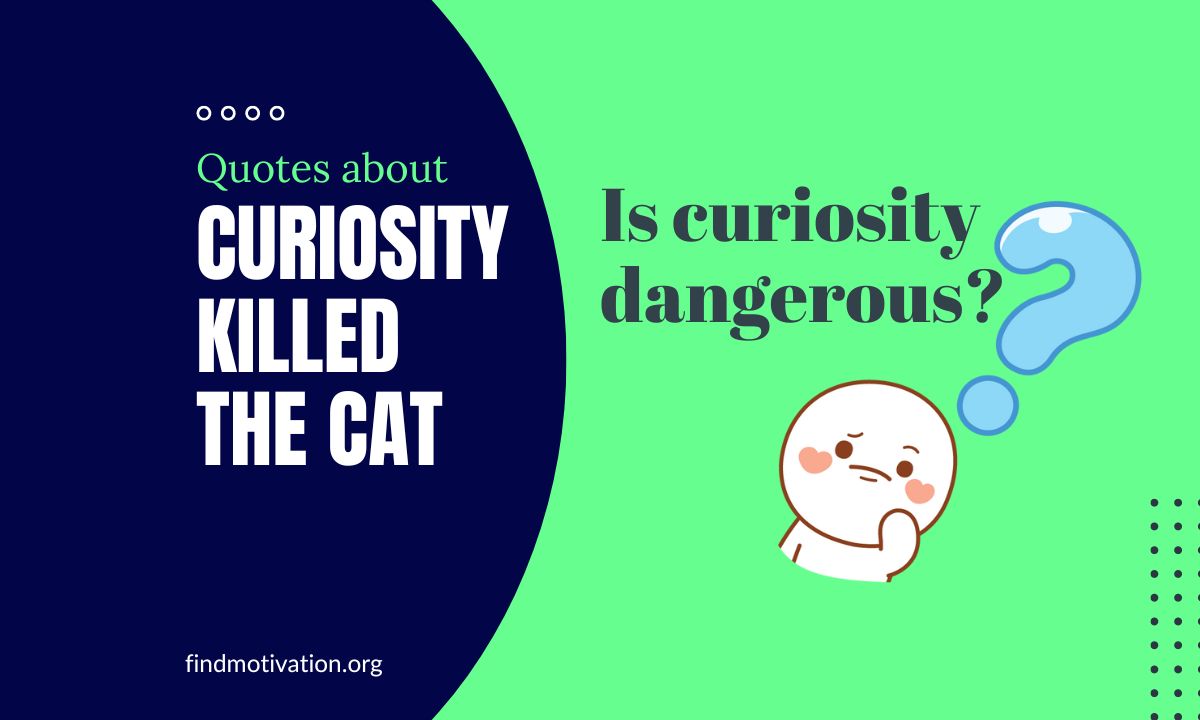 “Curiosity Killed the Cat” is a popular phrase that has been passed down through generations, warning us of the dangers of being too curious. The phrase is often used to caution people against poking their nose where it doesn’t belong or getting involved in something that may lead to trouble. Many famous figures throughout history have used this phrase in their own words, each providing their own unique interpretation of the meaning behind it. From philosophers to writers, these “Curiosity Killed the Cat” quotes offer a glimpse into the minds of some of the brightest minds in history and the lessons they have learned about curiosity.

You can also read quotes about proverbs such as Out of Sight Out of Mind and ‘It’s The Tip of The Iceberg’.

1. “And didn’t they say that, although curiosity killed the cat, satisfaction brought the beast back?” ― Stephen King

2. “Curiosity killed the cat, you know, but satisfaction brought him back snap-ass happy.” ― Stephen King

3. “Of course curiosity killed the cat, and even if satisfaction supposedly brought it back, there’s still that little problem with the man on the radio telling me more and more about some useless information.” ― Mark Z. Danielewski

4. “It may be that the strongest instinct of the human race, stronger than sex or hunger, is curiosity: the absolute need to know. It can and often does motivate a lifetime, it kills more than cats, and the prospect of satisfying it can be the most exciting of emotions.” ― Jack Finney

5. “Human curiosity. Such a very interesting thing. Think of what we owe to it throughout history. It is said to be usually associated with the cat. Curiosity killed the cat. But I should say really that the Greeks were the inventors of curiosity.” ― Agatha Christie

6. “Cats are unpredictable as they don’t know what they’re going to do next until they make it happen through nosiness, invention, acrobatics, and sheer force of will.” ― Stewart Stafford

7. “Curiosity killed the cat, but not before teaching her that honey bees are not sweet, tweeting birds are slow to react, mice can serve as both toys and food, big dogs like to snuggle, falling isn’t flying, cream drips from lazy cows, water should be avoided at all costs, baths don’t require getting wet, kindness and cruelty often fall from the same hand, and engines remain comfortably warm long after the motor dies.” ― Richelle E. Goodrich

8. “Curiosity may have killed the cat, but ignorance will kill the fool.” ― Matshona Dhliwayo

9. “Curiosity killed the cat”. I had been one of those annoying children who constantly asked why after being told anything. It seemed that even as an adult I couldn’t let things go. I had to dig deeper. I had to find out why.” ― Carrie Cox

10. “Curiosity killed the cat, you know.” “But satisfaction brought it back.” I take a sip of my wine. “Everyone always forgets the second line of that adage.” ― Nicole Fox

11. “They say that curiosity killed the cat, but if that were true, I would be a mangled mess at the bottom of a dumpster right now.” ― Krystalle Bianca

12. “It is frequently said that curiosity killed the cat, but what is often left unsaid is that the actual cause of death was the improper discharge of a firearm by a poorly trained feline.” ― Zachary Auburn

13. “Curiosity may have killed the cat, but paranoia was what tied it up in a sack and buried it in wet concrete.” ― Kate Griffin

14. “Curiosity might have killed the cat, but little girls usually fared much better.” ― Kate Morton

15. “Knowledge is Power. Ignorance is Bliss. But curiosity—even if it had killed the cat—is king.” ― Kim Harrison

16. “Curiosity never killed this cat’ — that’s what I’d like as my epitaph” ― Studs Terkel

17. “If curiosity killed the cat, it was satisfaction that brought it back.” ― Holly Black

18. “It has been said that nature does not know extinction. In effect, it knows only change: nothing ever truly disappears, for there is always something—some part, some particle, some formidable semblance—left behind. You can boil water into vapor, but it hasn’t disappeared. Curiosity killed the cat, but condensation brought it back.” ― Ronald Malfi

19. “Curiosity, after all, was what had driven mankind out from his isolated, unimportant world and across the gulf between the stars. It had also, he thoughtfully reminded himself, killed the figurative cat.” ― Alan Dean Foster

20. “Curiosity may have killed the cat, but it also made her life more interesting. The simple fact is, something always kills the cat. It was actually quite wise of her to choose something stimulating to perform that invaluable service.” ― George Hammond

11 Still Waters Run Deep Quotes on the Power of Silence