‘Don’t Judge a Book by its Cover’ Quotes: See Beyond The Surface 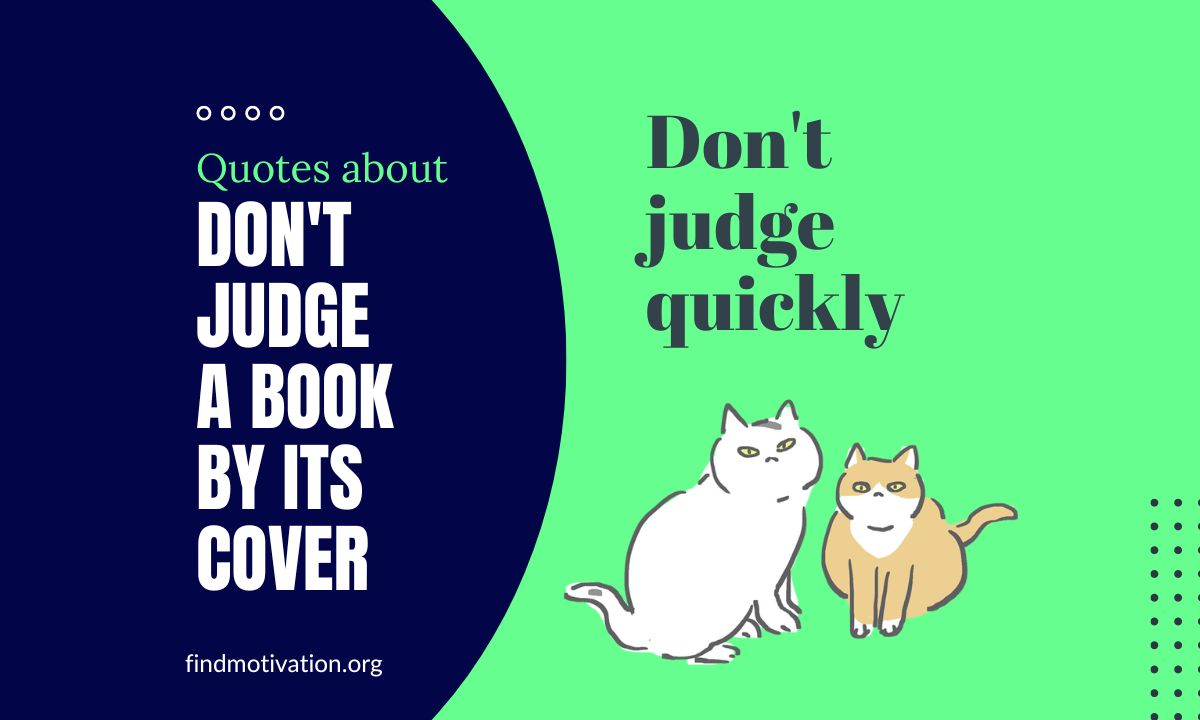 You can also read other proverb-related quotes such as Better Late Than Never and Rome Wasn’t Built in a Day.

Inspiring ‘Don’t Judge a Book by its Cover’ Quotes

1. “Don’t predict the condition of the entire day by the state of the morning. You don’t judge a book by its cover. A cloudy morning is no guarantee for a rainy day!” ― Israelmore Ayivor

2. “Never judge someone by the way he looks or a book by the way it’s covered; for inside those tattered pages, there’s a lot to be discovered.” ― Steve Cosgroves

3. “Usually people don’t see beyond the surface of things and cannot understand more other than the obvious; they are used to judging a book by its cover, and that is why they don’t hesitate to bully.” ― Maria Karvouni

4. “Outfits don’t define your character, your behavior does. Great achievements are born, not from fancy suits, but from great minds. And great minds do not need suits to feel and look important. Only the shallow look at outfits, but the wise know to look beyond. Look at the person beyond the outfit.” ― Abhijit Naskar

5. “A potato may look like a dirty stone, but cutting it and frying it will get you French Fries, a side dish for any burger.” ― Andrew Zimmern

6. “Don’t judge a book by its cover”. I’ve always found this adage to be true. In today’s “visual” world, it’s tempting to believe that a book’s cover will exactly match the reader’s interest in the words that follow. Humbug! Titillating photos of an attractive woman or man are sometimes the only ‘good’ thing about a book. Content is King. Ah, my Kingdom for good content!” ― Dickie Erman

7. “Sometimes I read the same books over and over and over. What’s great about books is that the stuff inside doesn’t change. People say you can’t judge a book by its cover but that’s not true because it says right on the cover what’s inside. And no matter how many times you read that book the words and pictures don’t change. You can open and close books a million times and they stay the same. They look the same. They say the same words. The charts and pictures are the same colors. Books are not like people. Books are safe.” ― Kathryn Erskine

8. “Don’t judge someone for how they look or where they stand in society. That is like judging a book for its cover or where it sits on a shelf. You’ll never find out whats inside unless you give a moment of your time to stop and take a look.” ― Georgette Tange

9. “Don’t judge a book by its cover. Mom is always saying that, but most of the time, I think that’s exactly what people are asking us to do: Please. Judge me by my cover. Judge me by exactly what I’ve worked so hard to show you.” ― Aaron Hartzler

10. “If somebody says to you the quote”don’t judge the book by its cover”, then better first close your eyes for a moment and try not to judge anybody at all. Even much better if you don’t have to believe in 100% with that quote.” ― Toba Beta

11. “Don’t judge a book by its cover. Judge it by its publisher.” ― Ljupka Cvetanova

13. “The same way we don’t judge a book by its cover, we shouldn’t judge people by their looks.” ― Eva Garcia

14. “Be patient; don’t judge a book by its racist, oppressive cover. Any police shooting is bound to be investigated, so wait for all the facts to be known and dismissed. In the end, it might be that white people think you deserved to be shot. But if you’re lucky, the police will start shooting even the most lovable white people and we’ll finally get some reforms!” ― D.L. Hughley

15. “Don’t judge a book by its cover, lover boy. I know I look like the girl next door, but inside, I’m more like The Girl With the Dragon Tattoo.” ― J.T. Geissinger

16. “YOU CAN’T ALWAYS JUDGE a book by its cover, but you can sometimes feel justified in discarding one on the basis of its title. Anything called “How to Motivate Your Work Force,” “Making People Productive,” or something of the sort can safely be passed over because the enterprise it describes is wholly misconceived. “Strictly speaking,” said Douglas McGregor, “the answer to the question managers so often ask of behavioral scientists—’How do you motivate people?’—is, ‘You don’t.’” ― Alfie Kohn

17. “Don’t judge a book by its cover because the criminal justice system is already overcrowded as it is.” ― J.S. Mason

18. “Don’t judge a book by its cover, because you never know what’s inside” ― Charlotte_Reads

Inspiring ‘Better Late Than Never’ Quotes To Inspire You