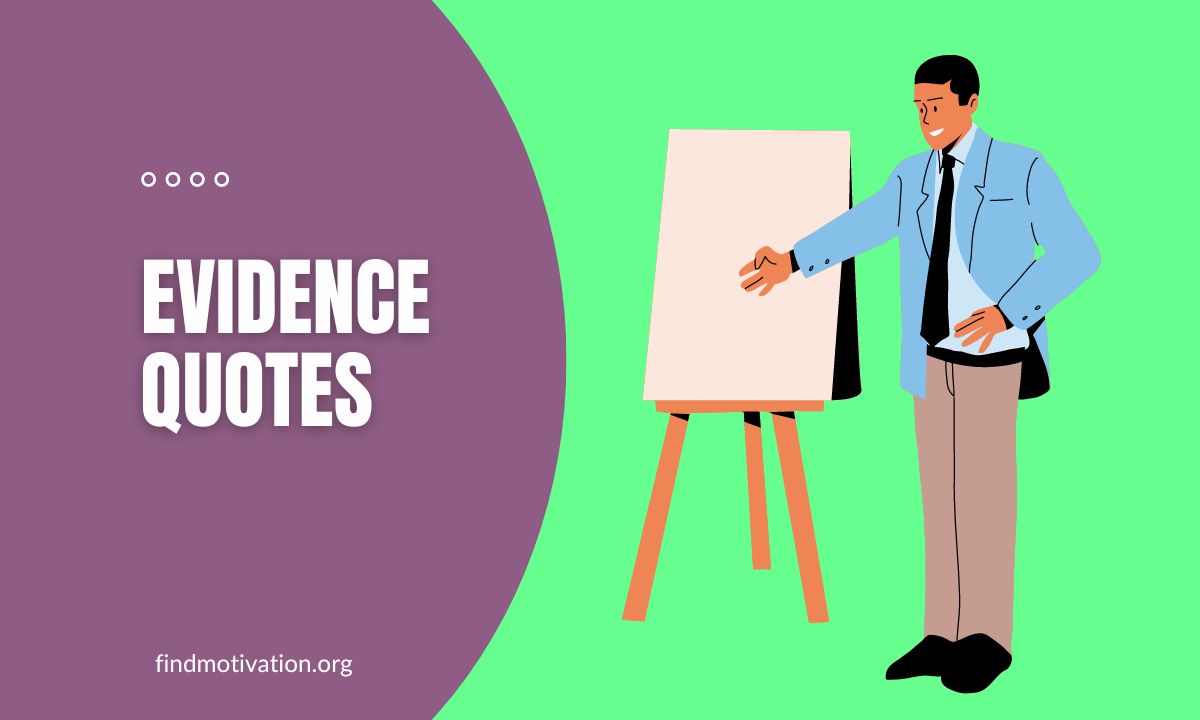 Evidence Quotes are powerful statements that remind us of the importance of facts and proof in shaping our understanding of the world. These quotes come from a variety of sources, including scientists, philosophers, and historical figures, and they highlight the crucial role that evidence plays in shaping our beliefs and actions. Whether it’s the evidence of our senses, the results of scientific experiments, or the testimony of experts, these quotes remind us that we should always be on the lookout for evidence to support our claims and to help us make better decisions. So, if you’re looking for a dose of inspiration and wisdom about the power of evidence, then check out these Evidence Quotes and see for yourself how they can help you think more critically and make better decisions.

You can also read other motivational quotes such as consent quotes and media quotes.

3. “Facts are stubborn things; and whatever may be our wishes, our inclinations, or the dictates of our passion, they cannot alter the state of facts and evidence.” ― John Adams

4. “I believe in evidence. I believe in observation, measurement, and reasoning, confirmed by independent observers. I’ll believe anything, no matter how wild and ridiculous, if there is evidence for it. The wilder and more ridiculous something is, however, the firmer and more solid the evidence will have to be.” ― Isaac Asimov

5. “Circumstantial evidence is a very tricky thing. It may seem to point very straight to one thing, but if you shift your own point of view a little, you may find it pointing in an equally uncompromising manner to something entirely different” ― Arthur Conan Doyle

8. “Faith is not a leap in the dark; it’s the exact opposite. It’s a commitment based on evidence… It is irrational to reduce all faith to blind faith and then subject it to ridicule. That provides a very anti-intellectual and convenient way of avoiding intelligent discussion.” ― John Lennox

9. “We must conduct research and then accept the results. If they don’t stand up to experimentation, Buddha’s own words must be rejected.” ― Dalai Lama XIV

10. “Some circumstantial evidence is very strong, as when you find a trout in the milk.” ― Henry David Thoreau

11. “The search for truth takes you where the evidence leads you, even if, at first, you don’t want to go there.” ― Bart D. Ehrman

12. “It is wrong always, everywhere, and for anyone, to believe anything upon insufficient evidence.” ― William Kingdon Clifford

13. “The thing is, it’s very dangerous to have a fixed idea. A person with a fixed idea will always find some way of convincing himself in the end that he is right” ― Atle Selberg

15. “Faith is not something that goes against the evidence, it goes beyond it. The evidence is saying to us, ‘There is another country. There is something beyond mere reason.” ― Alister E. McGrath

16. “Real evidence is usually vague and unsatisfactory. It has to be examined—sifted. But here the whole thing is cut and dried. No, my friend, this evidence has been very cleverly manufactured—so cleverly that it has defeated its own ends.” ― Agatha Christie

18. “Evidence is the weakest link in the decision-making chain” ― Alex Jadad

19. “When I wake up I go through an abbreviated process of mourning all over again. Plainly, there’s something within me that’s ready to believe in life after death. And it’s not the least bit interested in whether there’s any sober evidence for it.” ― Carl Sagan

20. “We should be agnostic about those things for which there is no evidence. We should not hold beliefs merely because they gratify our desires for the afterlife, immortality, heaven, hell, etc.” ― Julian S. Huxley

21. “If there is a god maybe it rewards those who don’t believe on the basis of insufficient evidence–and punishes those who do.” ― Peter Boghossian

22. “I couldn’t care less about evidence and proof and assurances. I just want God. I want God inside me. I want God to play in my bloodstream the way sunlight amuses itself on water.” ― Elizabeth Gilbert

23. “Mere lack of evidence, of course, is no reason to denounce a theory. Look at intelligent design. The fact that it is bollocks hasn’t stopped a good many people from believing in it. Darwinism itself is only supported by tons of evidence, which is a clear indication that Darwin didn’t write his books himself.” ― Eric Idle

24. “Science is a tool to help us all find the truth based on facts and evidence. It is not a religion. Yet many people are treating it as such, as a matter of faith or belief. If your religion contradicts the facts and evidence of science, it ought to make you reconsider what it is you believe.” ― Laurence Overmire

25. “Scientists gladly accept any new truth demonstrated by evidence, that is, proved by the very law of the cosmos. Not so with any new conceptions of religion; these are fought by the use of persecution and venom. Many of the current religious beliefs literally carried into practice would stampede humanity into the old jungle ideas and habits.” ― Luther Burbank

26. “You will need evidence to show the world that you didn’t waste your time here on earth. Generations to come should benefit from the products of your time converted.” ― Sunday Adelaja

27. “Those irritations and uneasiness you are faced with are evidence that you have the assignment to fulfill.” ― Sunday Adelaja

28. “We are alive and we resonate with the idea of life elsewhere, but only careful accumulation and assessment of the evidence can tell us whether a given world is inhabited.” ― Carl Sagan

21 Body Language Quotes To Express Yourself