100 Plato Quotes For Motivation in Life 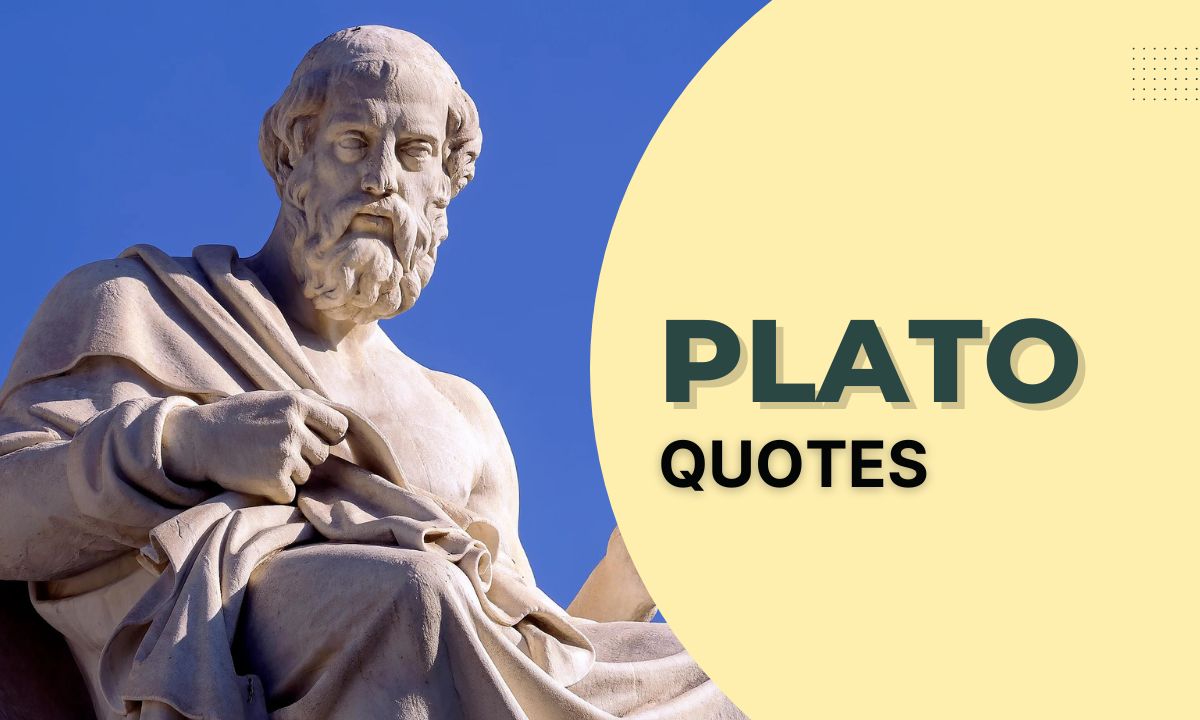 Find here some best inspirational 100 Plato Quotes, who was a famous Greek philosopher, to find motivation for life and education.

100 Plato Quotes For Motivation in Life

3. “The madness of love is the greatest of heaven’s blessings.” ― Plato, Phaedrus

4. “Education is teaching our children to desire the right things.” ― Plato

5. “You should not honor men more than truth.” ― Plato

7. “We can easily forgive a child who is afraid of the dark; the real tragedy of life is when men are afraid of the light.” ― Plato

8. “Music is a moral law. It gives soul to the universe, wings to the mind, flight to the imagination, and charm and gaiety to life and to everything.” ― Plato

9. “Good people do not need laws to tell them to act responsibly, while bad people will find a way around the laws.” ― Plato

11. “For a man to conquer himself is the first and noblest of all victories.” ― Plato

13. “The first and greatest victory is to conquer yourself; to be conquered by yourself is of all things most shameful and vile.” ― Plato

14. “People are like dirt. They can either nourish you and help you grow as a person or they can stunt your growth and make you wilt and die.” ― Plato

15. “A good decision is based on knowledge and not on numbers.” ― Plato

17. “Science is nothing but perception.” ― Plato

19. “Justice in the life and conduct of the State is possible only as first it resides in the hearts and souls of the citizens.” ― Plato

21. “To be sure I must, and therefore I may assume that your silence gives consent.” ― Plato

22. “The man who makes everything that leads to happiness depends upon himself, and not upon other men, and has adopted the very best plan for living happily. This is the man of moderation, the man of manly character and of wisdom.” ― Plato

Here are some best inspirational Plato quotes that will help students and kids to find motivation for their life.

23. “Thinking: the talking of the soul with itself.” ― Plato

24. “Knowledge becomes evil if the aim be not virtuous.” ― Plato

25. “Better a little which is well done, than a great deal imperfectly.” ― Plato

27. “The opinion is the medium between knowledge and ignorance.” ― Plato

28. “The beginning is the most important part of the work.” ― Plato

30. “There are three classes of men; lovers of wisdom, lovers of honor, and lovers of gain.” ― Plato

31. “There are two things a person should never be angry at, what they can help, and what they cannot.” ― Plato

32. “The direction in which education starts a man will determine his future in life.” ― Plato

33. “Music is the movement of sound to reach the soul for the education of its virtue.” ― Plato

36. “Those who tell the stories rule society.” ― Plato

37. “The object of education is to teach us to love what is beautiful.” ― Plato

39. “Necessity is the mother of invention.” ― Plato

40. “The greatest wealth is to live content with little.” ― Plato

43. “Good actions give strength to ourselves and inspire good actions in others.” ― Plato

46. “The first and best victory is to conquer self” ― Plato

47. “Do not train a child to learn by force or harshness; but direct them to it by what amuses their minds, so that you may be better able to discover with accuracy the peculiar bent of the genius of each.” ― Plato

48. “The heaviest penalty for declining to rule is to be ruled by someone inferior to yourself.” ― Plato

49. “How can you prove whether at this moment we are sleeping, and all our thoughts are a dream; or whether we are awake, and talking to one another in the waking state? ” ― Plato

50. “Bodily exercise, when compulsory, does no harm to the body; but knowledge which is acquired under compulsion obtains no hold on the mind.” ― Plato

51. “Love is simply the name for the desire and pursuit of the whole.” ― Plato

52. “No man should bring children into the world who is unwilling to persevere to the end in their nature and education.” ― Plato

53. “Musical innovation is full of danger to the State, for when modes of music change, the fundamental laws of the State always change with them.” ― Plato

54. “Love is born into every human being; it calls back the halves of our original nature together; it tries to make one out of two and heal the wound of human nature.” ― Plato

55. “I thought to myself: I am wiser than this man; neither of us probably knows anything that is really good, but he thinks he has knowledge, when he has not, while I, having no knowledge, do not think I have.” ― Plato

56. “There is in every one of us, even those who seem to be most moderate, a type of desire that is terrible, wild, and lawless.” ― Plato

57. “I would teach children music, physics, and philosophy; but most importantly music, for the patterns in music and all the arts are the keys to learning” ― Plato

58. “For this feeling of wonder shows that you are a philosopher, since wonder is the only beginning of philosophy.” ― Plato

59. “The first and best victory is to conquer self” ― Plato

61. “True friendship can exist only between equals.” ― Plato

62. “Love’ is the name for our pursuit of wholeness, for our desire to be complete.” ― Plato

63. “The soul takes flight to the world that is invisible but there arriving she is sure of bliss and forever dwells in paradise.” ― Plato

64. “No wealth can ever make a bad man at peace with himself” ― Plato

65. “Knowledge which is acquired under compulsion has no hold on the mind. Therefore do not use compulsion, but let early education be a sort of amusement; you will then be better able to discover the child’s natural bent.” ― Plato

66. “False words are not only evil in themselves, but they infect the soul with evil.” ― Plato

68. “The difficulty, my friends, is not in avoiding death, but in avoiding unrighteousness; for that runs faster than death.” ― Plato

69. “Poetry is nearer to vital truth than history.” ― Plato

71. “Excess of liberty, whether it lies in state or individuals, seems only to pass into excess of slavery.” ― Plato

73. “Man…is a tame or civilized animal; nevertheless, he requires proper instruction and a fortunate nature, and then of all animals, he becomes the most divine and most civilized; but if he is insufficiently or ill- educated he is the most savage of earthly creatures.” ― Plato

74. “Musical training is a more potent instrument than any other because rhythm and harmony find their way into the inward places of the soul.” ― Plato

75. “Money-makers are a tiresome company, as they have no standard but cash value.” ― Plato

79. “Lack of activity destroys the good condition of every human being” ― Plato

80. “Honesty is for the most part less profitable than dishonesty” ― Plato

81. “The philosopher whose dealings are with divine order himself acquires the characteristics of order and divinity.” ― Plato

82. “Strange times are these in which we live when old and young are taught falsehoods in school. And the person that dares, to tell the truth, is called at once a lunatic and fool” ― Plato

83. “To conquer oneself is the best and noblest victory; to be vanquished by one’s own nature is the worst and most ignoble defeat.” ― Plato

84. “We are like people looking for something they have in their hands all the time; we’re looking in all directions except at the thing we want, which is probably why we haven’t found it.” ― Plato

85. “Be kind, because everyone is having a really hard time.” ― Plato

86. “The soul of man is immortal and imperishable.” ― Plato

87. “The first and best victory is to conquer self. To be conquered by self is, of all things, the most shameful and vile.” ― Plato

88. “Opinion is the medium between knowledge and ignorance” ― Plato

89. “No matter how hard you fight the darkness, every light casts a shadow, and the closer you get to the light, the darker that shadow becomes.” ― Plato

90. “Wealth is the parent of luxury and indolence, and poverty of meanness and viciousness, and both of discontent.” ― Plato

91. “What a strange thing that which men call pleasure seems to be, and how astonishing the relation it has with what is thought to be its opposite, namely pain! A man cannot have both at the same time. Yet if he pursues and catches the one, he is almost always bound to catch the other also, like two creatures with one head.” ― Plato

92. “The first and greatest victory is to conquer yourself.” ― Plato

93. “It is our duty to select the best and most dependable theory that human intelligence can supply, and use it as a raft to ride the seas of life.” ― Plato

95. “Nothing more excellent nor more valuable than wine was ever granted mankind by God.” ― Plato

96. “‎Love is a madness produced by an unsatisfiable rational desire to understand the ultimate truth about the world.” ― Plato

97. “Always be kind, for everyone is fighting a hard battle.” ― Plato

99. “The soul of him who has education is whole and perfect and escapes the worst disease, but, if a man’s education be neglected, he walks lamely through life and returns good for nothing to the world below.” ― Plato

100. “The truth is that we isolate a particular kind of love and appropriate it for the name of love, which really belongs to a wider whole.” ― Plato

54 Best Seneca Quotes to Get Motivation in Life