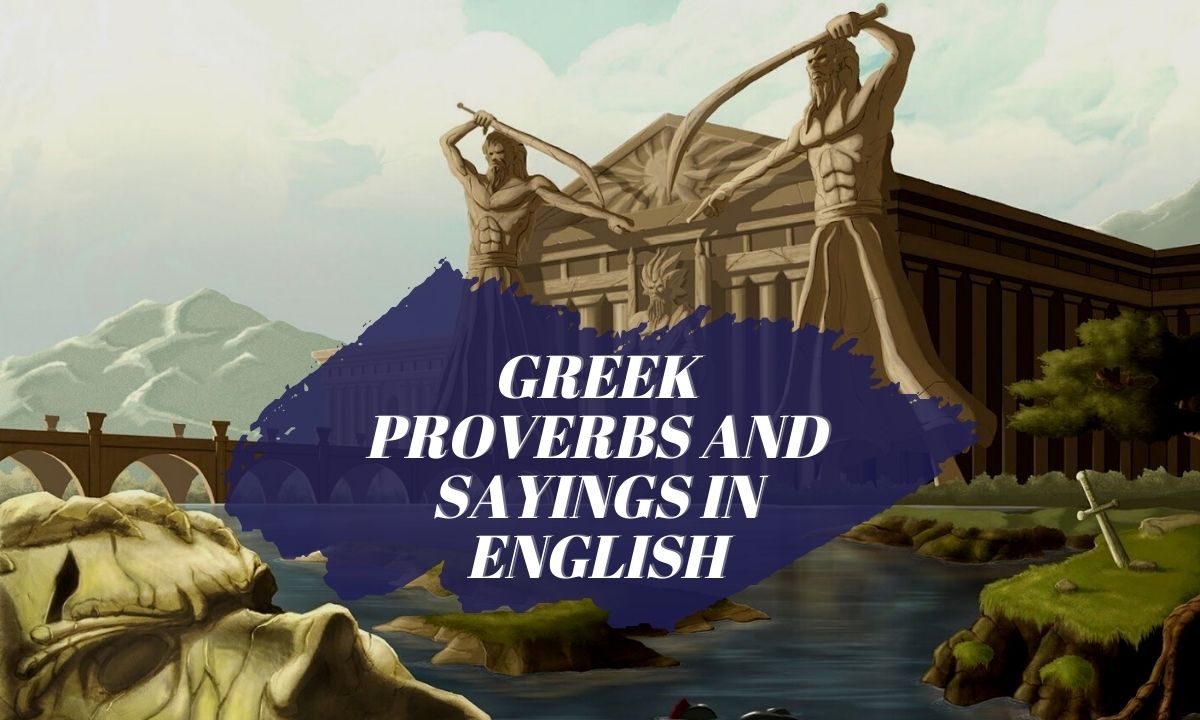 Greek proverbs are a rich and ancient tradition in Greek culture. These short, pithy sayings capture the wisdom and practicality of the Greek people, offering insights and advice on everything from relationships to politics. Many Greek proverbs are still widely used and quoted today, and their enduring popularity is a testament to their timeless wisdom. Whether you’re looking for words of encouragement or a dose of practicality, you’ll find plenty of inspiration in the rich and varied collection of Greek proverbs.

You can also read other proverbs and sayings in English such as Spanish proverbs.

1. A drowning man takes hold of his own hair.

2. A good neighbor is a great advantage.

4. A great city is a great solitude.

6. A lucky man fares better than a brave man.

7. A mad bull is not to be tied up with a packthread.

8. A man who does not demand his rights is buried alive.

9. A man who throws stones at himself is not to be pitied.

10. A man without patience is like a lamp without oil.

11. A miser and a liar bargain quickly.

12. A newlywed girl takes pride in her pregnancy.

14. A society grows great when old men plant trees whose shade they know they shall never sit in.

15. A thousand blows on another man’s back don’t hurt.

16. A well-fed man does not believe the hungry one.

17. A woman prefers a man without money to money without a man.

18. A young man should not marry yet, an old man not at all.

21. All the old things seem beautiful, and the rich men are wise.

22. An hour brings what a year does not.

23. An oath taken during sex is not valid.

27. At a deaf man’s door it is all one whether you knock or not.

28. Better a drop of wisdom than an ocean of gold.

29. Better the first of its kind than the last.

30. Better to live apart and get along than to live together and argue.

31. Birth, ancestry, and that which you yourself have not achieved can hardly be called your own.

33. By degrees the kissing so that it can be tasty.

35. Character is a habit long continued.

36. Cherish what you have and struggle for the better.

37. Curses are like chickens; they come home to roost.

41. Each shameful deed carries with it its excuse.

42. Endeavor to bear the ignorance of fortune with patience.

43. Every story can be told in different ways.

44. Eyes that don’t see each other frequently are soon forgotten.

45. From a broken violin do not expect fine music.

46. God loves the burglar, but he loves the householder too.

47. He who eats and drinks with the rich leaves the table hungry.

48. He who has much wept as well as he who has little.

49. He who has patience gets what he wants.

51. He who plies many trades remains without a house.

52. How thrice wretched is he who marries when he is poor!

54. If you are s stranger, follow the local laws.

57. In hospitality, the chief thing is good will.

58. It is disgraceful to stumble three times at the same stone.

59. It is easier to talk than to hold one’s tongue.

60. It is not good for all our wishes to be filled;  through sickness, we recognize the value of health;

62. It’s sweet to view the sea when standing on the shore.

63. Joy and sorrow are sisters.

64. Learn to obey before you command.

65. Many captains sink the ship.

67. Never too much of anything.

69. Nothing bad is without something good.

70. Old age and treachery will overcome youth and skill.

72. Once you learn something it is hard to unlearn.

73. One minute of patience can mean ten years of peace.

74. One word spoken in anger may spoil an entire life.

75. Pleasure is the greatest incentive to vice.

79. Success has many friends.

80. The dog does not eat hay, but he doesn’t let the donkey eat it either.

81. The dream is realized where you do not expect it.

82. The fox that waits until the chicken falls from the perch dies from hunger.

85. The king has many treasures but he will still take whatever you give him.

86. The man who controls his wrath conquers his foe.

87. The real ornament of a woman is her character, not jewelry.

88. The sins we often regret are the sins we never commit.

90. Think not about what you lack as much as what you have.

91. through evil, the value of good; through hunger,

92. Through our ears others may persuade us not to believe the evidence of our own eyes.

95. Too many opinions sink the boat.

96. Truth holds though it is bitterly taken.

98. What you learn in youth you do not unlearn in old age.

99. When the light is out every woman is alike.

102. You know who the good seamen are when the storm comes.