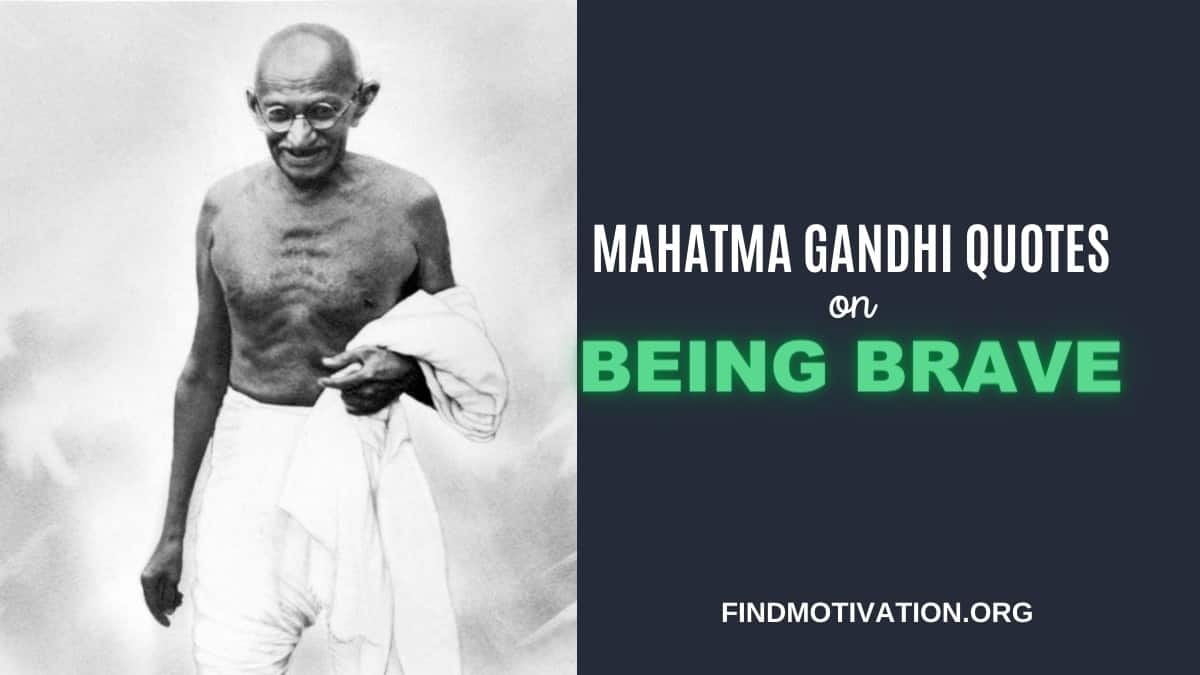 Being brave is not just a quality of body, it is the quality of the soul. What is brave or bravery? Read here 19 inspiring bravery quotes said by Mahatma Gandhi that will help you to understand the meaning of being brave and bravery.

“Bravery is not a quality of the body, it is of the soul.”

3. “Nonviolence is the summit of bravery.”

4. “Bravery on the battlefield is impossible for us. The bravery of the soul still remains open to us.”

5. “I see neither bravery nor sacrifice in destroying life or property for offense or defense.”

6. “Mere brave speech without action is letting off useless steam.”

7. “True Purusha, true bravery, consists in driving out the brute in us.”

8. “Unexampled bravery, born of nonviolence, coupled with strict honesty shown by a fair number of Muslims, was sure to infect the whole of India.”

9. “The art of dying bravely and with honor does not need any special training, save a living faith in God.”

“The art of dying bravely and with honor does not need any special training, save a living faith in God.”

10. “For thousands to do to death a few hundreds is no bravery. It is worse than cowardice. It is unworthy of nationalism, of any religion.”

11. “Active nonviolence of the brave puts to flight thieves, dacoits, murderers, and prepares an army of volunteers ready to sacrifice themselves in quelling riots, in extinguishing fires and feuds, and so on.”

13. “There can be no friendship between cowards, or cowards and brave men.”

14. “The man or the woman who can display this nonviolence of the brave can easily stand against an external invasion.”

15. “Those who are truthful, nonviolent, and brave do not cease to be so because of the stupidity of their leader.”

16. “Ahimsa is an attribute of the brave. Cowardice and ahimsa don’t go together with any more than water and fire.”

17. “Ahimsa is the highest ideal. It is meant for the brave, never for the cowardly.”

“Ahimsa is the highest ideal. It is meant for the brave, never for the cowardly.”

18. “The history of the world is full of instances of men who rose to leadership by sheer force of self-confidence, bravery, and tenacity.”

19. “A straight fight in an equal battle takes some bravery, but braver is he who, knowing that he would have to sacrifice ninety-five as against five of the enemy, faces death.”

Final Words: I hope you liked the above 19 Mahatma Gandhi Quotes on Brave. Don’t forget to mention the best line that you liked most from the above lines in the comment box below.

You can also read our other motivational quotes from the below list.

17 Character Quotes said by Mahatma Gandhi to define the character