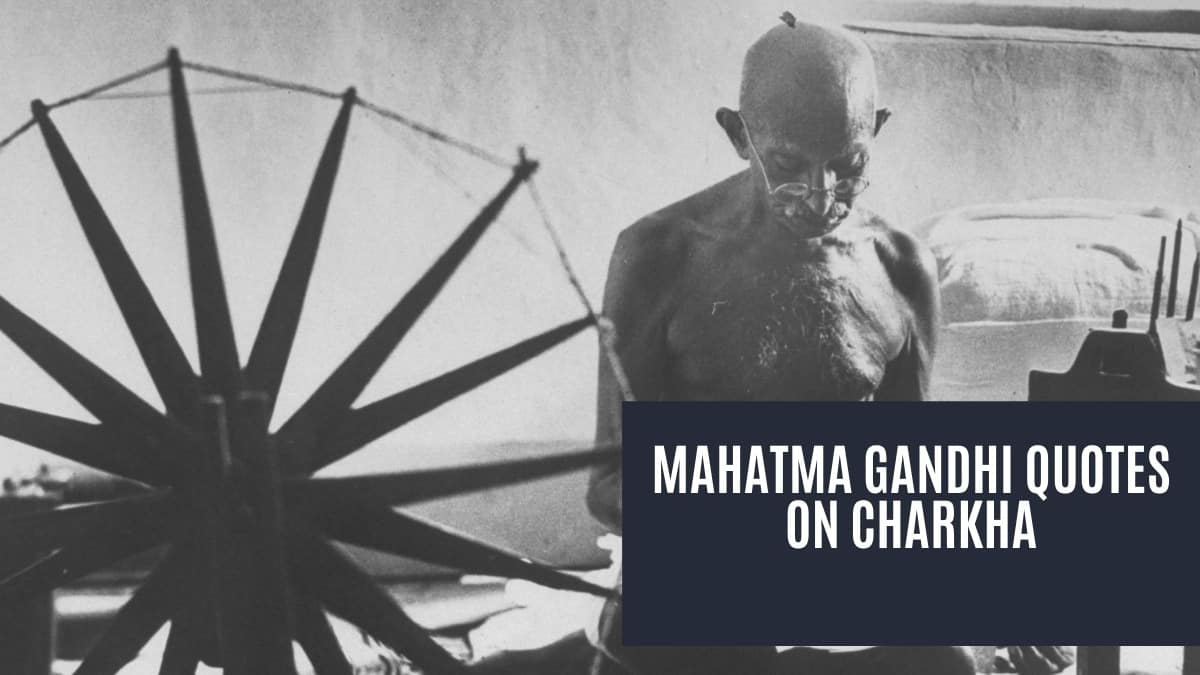 Charkha called spinning wheel in English. The charkha, or spinning wheel, was the physical embodiment and symbol of Gandhi’s constructive program. It represents Swadeshi, self-sufficiency, and at the same time interdependence, because the wheel is at the center of a network of cotton growers, carders, weavers, distributors, and users. According to Gandhiji, Charkha is the symbol of nonviolence. He used it as an instrument of India’s freedom. Let’s read 60 Mahatma Gandhi Quotes on charkha to understand his clear opinion.

1. “Charkha is an instrument of service.”

3. “The Charkha is an outward symbol of truth and nonviolence.”

4. “The Charkha is intended to realize the essential and living oneness of interest among India’s myriads.”

5. “The Charkha is the symbol of nonviolence on which all life if it is to be real life, must be based.”

6. “The Charkha is the symbol of sacrifice, and sacrifice is essential for the establishment of the image of the deity.”

7. “The Charkha supplemented the agriculture of the villagers and gave it dignity.”

8. “Seek ye first the Charkha and its concomitants and everything else will be added unto you.”

9. “The Charkha, which is the embodiment of willing obedience and calm persistence, must therefore succeed before there is civil disobedience.”

10. “Unless the charkha adds to your ahimsa and makes you stronger every day, your Gandhism is of little avail.”

12. “I believe that the yarn we spin is capable of mending the broken warp and woof of our life.”

13. “I claim that in losing the spinning wheel we lost our left lung.”

15. “I have called spinning the yajna of this age of India.”

16. “If Gandhism means simply mechanically turning the spinning wheel, it deserves to be destroyed.”

17. “I have pinned my faith to the spinning wheel. On it, I believe, the salvation of this country depends.”

19. “My heart is drawn backward and forwards between the spinning wheel and books.”

20. “For every minute that I spin, there is in me the consciousness that I am adding to the nation’s wealth.”

22. “The spinning wheel means national consciousness and a contribution by every individual to a definite constructive national work.”

23. “The spinning wheel is a symbol of nonviolence for me.”

24. “He who spins before the poor, inviting them to do likewise, serves God as no one else does.”

25. “I would like to assure those who would serve Daridranarayana that there is music, art, economy, and joy in the spinning wheel.”

26. “The spinning wheel is not meant to oust a single man or woman from his or her occupation.”

27. “The spinning wheel is as much a necessity of Indian life as air and water.”

28. “The spinning wheel is the one thing to which all must turn to in the Indian clime for the transition stage at any rate and the vast majority must for all time.”

29. “The spinning wheel is itself an exquisite piece of machinery. My head daily bows in reverence to its unknown inventor.”

30. “The spinning wheel for us is the foundation for all public corporate life.”

31. “The spinning wheel is the auspicious symbol of sharir yajna, body labor.”

32. “There is no better way of industrializing the villages of India than the spinning wheel.”

33. “If you will express the requisite purity of character in action, you cannot do it better than through the spinning wheel.”

34. “Every woman will tell the curious that with the disappearance of the spinning wheel vanished India’s happiness and prosperity.”

35. “There is no “playing with the truth” in the Charkha program, for satyagraha is not predominantly civil disobedience but a quiet and irresistible pursuit of Truth.”

37. “The study of Indian economics is the study of the spinning wheel.”

38. “The yajna of our age and for us is the spinning wheel.”

39. “The foundation of service and your real training lie in spinning khaddar.”

40. “The restoration of spinning to its central place in India’s peaceful campaign for deliverance from the imperial yoke gives her women a special status.”

41. “Without the proper, careful organization of the spinning wheel and khaddar, there is absolutely no civil disobedience.”

42. “There is a vital connection between satyagraha and charkha, and the more I find that belief challenged, the more I am confirmed in it.”

43. “The music of the spinning wheel will be a balm to your soul.”

44. “Every widow I have met has recognized in the wheel a dear forgotten friend.”

45. “It was our love of foreign cloth that ousted the wheel from its position of dignity.”

46. “When the wheel was accepted as part of the national flag, it was surely implied that the spinning wheel would hum in every household.”

47. “Hand-spinning is designed to put millions of rupees in the hands of the poor villagers.”

48. “If hand-spinning is an effective method of making India self-supporting, it must be made part of the franchise.”

49. “My Swaraj takes note of bhangis, dheds, dublas, and the weakest of the weak, and except the spinning wheel, I know no other thing which befriends all these.”

50. “A plea for the spinning wheel is a plea for recognizing the dignity of labor.”

51. “Hunger is the argument that is driving India to the spinning wheel.”

52. “India as a nation can live and die only for the spinning wheel.”

53. “Just as there are signs by which you can recognize violence with the naked eye, so is the spinning wheel to be a decisive sign of nonviolence.”

54. “Nothing can so quickly put the masses on their legs as the spinning wheel and all it means.”

55. “Restore the spinning wheel to its place and you will solve the problem of poverty.”

56. “The cause of the spinning wheel is too great and too good to have to rest on mere hero worship.”

57. “If the poet(Rabindranath Tagore) spun for half an hour daily, his poetry would gain in richness.”

58. “If we are true servants of the masses, we would take pride in spinning for their sake.”

59. “One hour spent in spinning should be an hour of self-development for the spinner.”

60. “There is no sacrifice greater than spinning calculated to bring peace to the troubled spirit, to soothe the distracted student’s mind, to spiritualize his life.”

Conclusion: I hope you liked the above Mahatma Gandhi Quotes on Charkha. Don’t forget to mention the best line that you liked most from the above lines in the comment box below.

You can also read our other motivational quotes from the below list.