90 Mark Twain Quotes That Can Change Your World 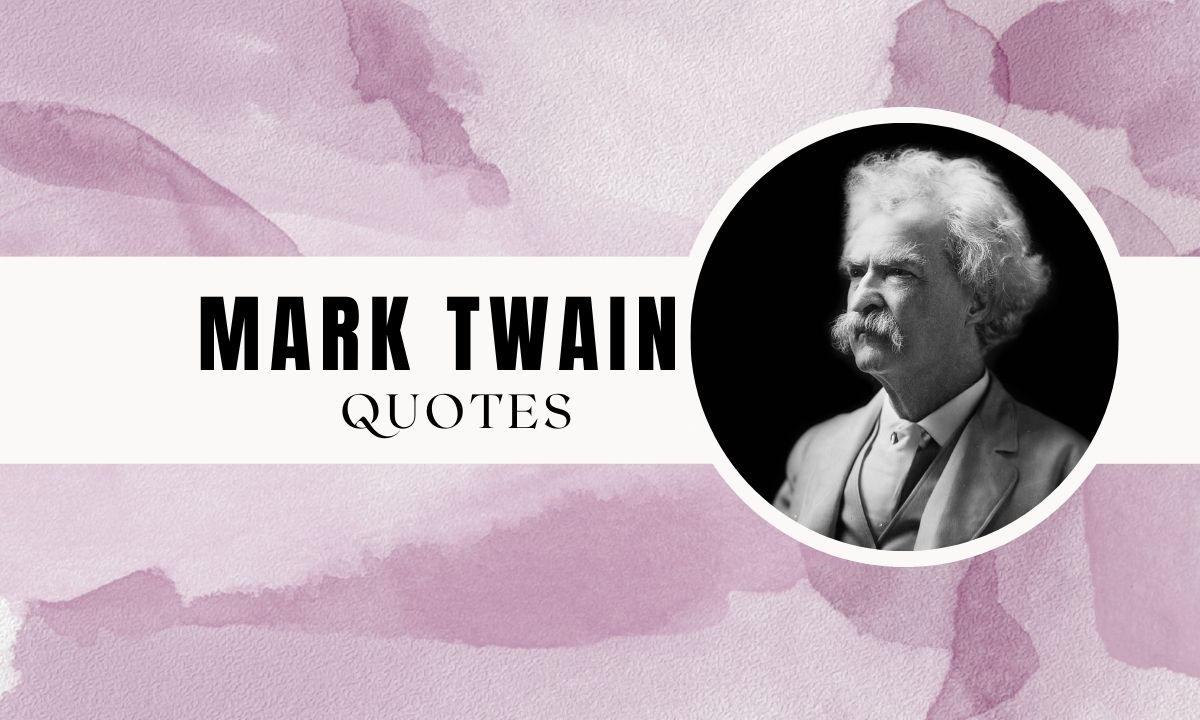 Mark Twain, born as Samuel Langhorne Clemens, was a renowned American writer, humorist, and journalist who is best known for his literary works such as “The Adventures of Tom Sawyer” and “The Adventures of Huckleberry Finn”. Twain was a master at using wit and humor to convey his thoughts and observations about society and human nature. His clever and insightful quotes have stood the test of time and continue to be widely quoted and admired today. Some of Twain’s most famous quotes include “Age is an issue of mind over matter. If you don’t mind, it doesn’t matter,” and “Good friends, good books, and a sleepy conscience: this is the ideal life.” Twain’s words are a testament to his ability to capture the essence of human experience in a way that is both funny and profound.

You can also read our other inspiring posts such as powerful eastern philosophy quotes, Marcus Aurelius Quotes, and ultimate stoic quotes.

3. “A man cannot be comfortable without his own approval.” ― Mark Twain

“A man cannot be comfortable without his own approval.”

4. “The two most important days in your life are the day you are born and the day you find out why.” ― Mark Twain

5. “If animals could speak, the dog would be a blundering outspoken fellow; but the cat would have the rare grace of never saying a word too much.” ― Mark Twain

6. “Always acknowledge a fault. This will throw those in authority off their guard and give you an opportunity to commit more.” ― Mark Twain

8. “Training is everything. The peach was once a bitter almond; cauliflower is nothing but cabbage with a college education.” ― Mark Twain

9. “Writing is easy. All you have to do is cross out the wrong words.” ― Mark Twain

11. “There are many humorous things in the world; among them, the white man’s notion that he is less savage than the other savages.” ― Mark Twain

12. “Education consists mainly of what we have unlearned.” ― Mark Twain

13. “It’s easier to fool people than to convince them that they have been fooled.” ― Mark Twain

14. “Action speaks louder than words but not nearly as often.” ― Mark Twain

15. “Human beings can be awful cruel to one another.” ― Mark Twain

16. “Right is right, and wrong is wrong, and a body ain’t got no business doing wrong when he ain’t ignorant and knows better.” ― Mark Twain

17. “Clothes make the man. Naked people have little or no influence on society.” ― Mark Twain

19. “It is better to keep your mouth closed and let people think you are a fool than to open it and remove all doubt.” ― Mark Twain

20. “The best way to cheer yourself up is to try to cheer somebody else up.” ― Mark Twain

21. “Part of the secret of a success in life is to eat what you like and let the food fight it out inside.” ― Mark Twain

22. “Whenever you find yourself on the side of the majority, it is time to pause and reflect.” ― Mark Twain

“Whenever you find yourself on the side of the majority, it is time to pause and reflect.”

25. “Courage is resistance to fear, mastery of fear, not absence of fear.” ― Mark Twain

26. “The human race has one really effective weapon, and that is laughter.” ― Mark Twain

27. “All you need in this life is ignorance and confidence, and then success is sure.” ― Mark Twain

28. “If you tell the truth, you don’t have to remember anything.” ― Mark Twain

30. “You can’t depend on your eyes when your imagination is out of focus.” ― Mark Twain

31. “Forgiveness is the fragrance that the violet sheds on the heel that has crushed it.” ― Mark Twain

32. “Life would be infinitely happier if we could only be born at the age of eighty and gradually approach eighteen.” ― Mark Twain

35. “The secret of getting ahead is getting started.” ― Mark Twain

“The secret of getting ahead is getting started.”

37. “Truth is stranger than fiction, but it is because Fiction is obliged to stick to possibilities; Truth isn’t.” ― Mark Twain

38. “The fear of death follows from the fear of life. A man who lives fully is prepared to die at any time.” ― Mark Twain

40. “Go to Heaven for the climate, Hell for the company.” ― Mark Twain

41. “Anger is an acid that can do more harm to the vessel in which it is stored than to anything on which it is poured.” ― Mark Twain

42. “Good friends, good books and a sleepy conscience: this is the ideal life.” ― Mark Twain

43. “Patriotism is supporting your country all the time, and your government when it deserves it.” ― Mark Twain

44. “A man who carries a cat by the tail learns something he can learn in no other way.” ― Mark Twain

45. “Never put off till tomorrow what you can do the day after tomorrow.” ― Mark Twain

47. “Giving up smoking is the easiest thing in the world. I know because I’ve done it thousands of times.” ― Mark Twain

49. “A man’s character may be learned from the adjectives which he habitually uses in conversation.” ― Mark Twain

51. “A person who won’t read has no advantage over one who can’t read.” ― Mark Twain

“A person who won’t read has no advantage over one who can’t read.”

52. “A lie can travel half way around the world while the truth is putting on its shoes.” ― Mark Twain

53. “Keep away from people who try to belittle your ambitions. Small people always do that, but the really great make you feel that you, too, can become great.” ― Mark Twain

54. “Never allow someone to be your priority while allowing yourself to be their option.” ― Mark Twain

56. “I do not fear death. I had been dead for billions and billions of years before I was born, and had not suffered the slightest inconvenience from it.” ― Mark Twain

57. “Books are for people who wish they were somewhere else.” ― Mark Twain

58. “Don’t part with your illusions. When they are gone you may still exist, but you have ceased to live.” ― Mark Twain

59. “The trouble is not in dying for a friend, but in finding a friend worth dying for.” ― Mark Twain

61. “The best way to cheer yourself is to try to cheer someone else up.” ― Mark Twain

62. “Name the greatest of all inventors. Accident.” ― Mark Twain

“Name the greatest of all inventors. Accident.”

63. The secret to getting ahead is getting started.” ― Mark Twain

64. “Get your facts first, and then you can distort them as much as you please.” ― Mark Twain

65. “A banker is a fellow who lends you his umbrella when the sun is shining, but wants it back the minute it begins to rain.” ― Mark Twain

66. “Never argue with stupid people, they will drag you down to their level and then beat you with experience.” ― Mark Twain

67. “I have found out that there ain’t no surer way to find out whether you like people or hate them than to travel with them.” ― Mark Twain

69. “The most interesting information come from children, for they tell all they know and then stop.” ― Mark Twain

70. “Part of the secret of success in life is to eat what you like and let the food fight it out inside.” ― Mark Twain

71. “It’s better to keep your mouth shut and appear stupid than open it and remove all doubt” ― Mark Twain

72. “Never argue with an idiot. They will only bring you down to their level and beat you with experience.” ― Mark Twain

74. “Thunder is good, thunder is impressive; but it is lightning that does the work.” ― Mark Twain

77. “Let us live so that when we come to die even the undertaker will be sorry.” ― Mark Twain

78. “Few things are harder to put up with than the annoyance of a good example.” ― Mark Twain

79. “Let us be thankful for the fools. But for them the rest of us could not succeed. ” ― Mark Twain

81. “Life does not consist mainly, or even largely, of facts or happenings. It consist mainly of the storm of thoughts that is forever flowing through one’s head.” ― Mark Twain

83. “Write without pay until somebody offers to pay.” ― Mark Twain

84. “Noise proves nothing. Often a hen who has laid an egg cackles as if she had laid an asteroid.” ― Mark Twain

85. “Don’t wake up a woman in love. Let her dream, so that she does not weep when she returns to her bitter reality” ― Mark Twain

86. “Let us consider that we are all partially insane. It will explain us to each other; it will unriddle many riddles; it will make clear and simple many things which are involved in haunting and harassing difficulties and obscurities now.” ― Mark Twain

87. “I can teach anybody how to get what they want out of life. The problem is that I can’t find anybody who can tell me what they want.” ― Mark Twain

“I can teach anybody how to get what they want out of life. The problem is that I can’t find anybody who can tell me what they want.”

88. “Nothing that grieves us can be called little: by the eternal laws of proportion a child’s loss of a doll and a king’s loss of a crown are events of the same size.” ― Mark Twain

89. “A gentleman is someone who knows how to play the banjo and doesn’t.” ― Mark Twain

90. “What gets us into trouble is not what we don’t know. It’s what we know for sure that just ain’t so.” ― Mark Twain

Image by Jackie Ramirez from Pixabay

The 7 C’s of Communication To Achieve Connection and Clarity