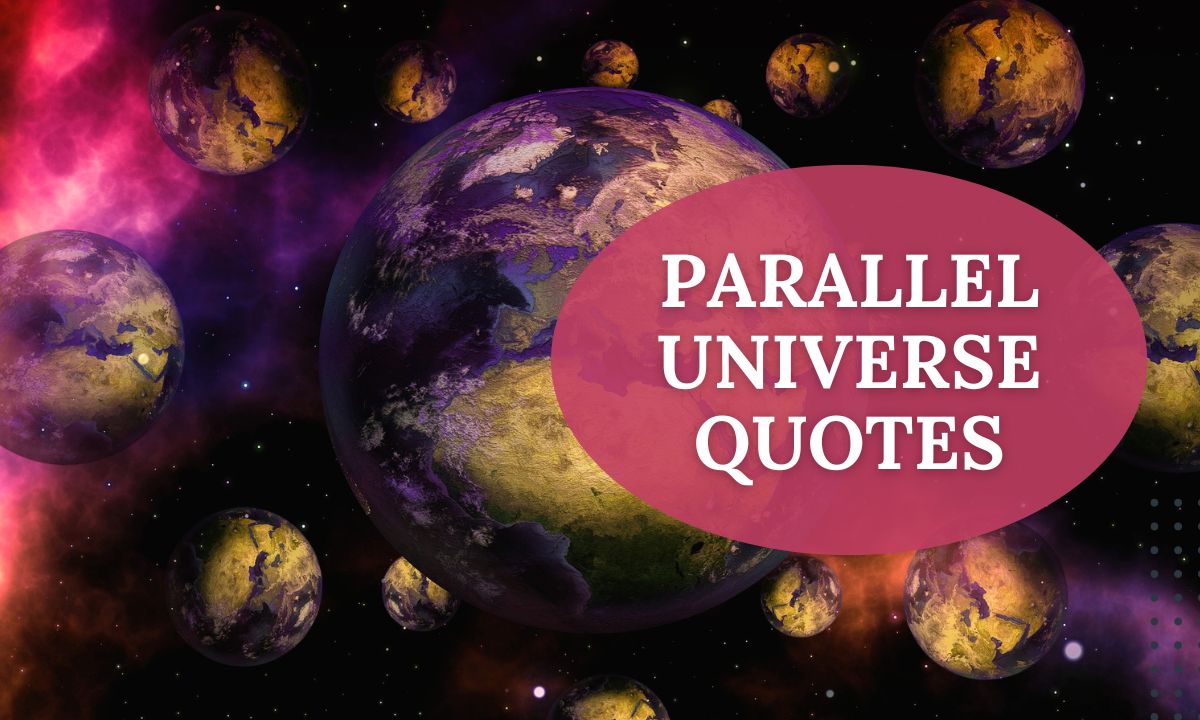 You can also read cosmology quotes and infinity quotes.

1. “In some parallel universe, there was a Gansey who could tell Blue that he found the ten inches of her bare calves far more tantalizing than the thirteen cubic feet of bare skin Orla sported. But in this universe, that was Adam’s job. He was in a terrible mood.” ― Maggie Stiefvater

2. “It is often stated that of all the theories proposed in this century, the silliest is quantum theory. In fact, some say that the only thing that quantum theory has going for it is that it is unquestionably correct.” ― Michio Kaku

3. “Maybe we were together in another life…in a parallel universe, maybe our paths are not supposed to cross twice, maybe your arms are not supposed to go around me. I hear about you now & then, I wonder where you are & how you feel. Sometimes I walk by & I look up to your balcony, just to make sure you were real-just to make sure that I can still feel you…it appears to me that Destiny Rules.” ― Stevie Nicks

4. “The structures of the multiverse are hidden by the reality principles of complex numbers in quantum physics. This is why the parallel universes that make up the multiverse can’t be seen by each other.” ― Amit Ray

5. “If a coin comes down heads, that means that the possibility of its coming down tails has collapsed. Until that moment the two possibilities were equal. But in another world, it does come down tails. And when that happens, the two worlds split apart.” ― Philip Pullman

6. “These parallel universes are not ghost worlds with an ephemeral existence; within each universe, we have the appearance of solid objects and concrete events as real and as objective as any.” ― Michio Kaku

7. “We never change the world we’re on. We change ourselves and we actually shift to another version of Earth that already exists that is more reflective of the change we made in us. This gets into things like parallel realities, the multiverse – all of that kind of idea.” ― Darryl Anka

8. “Having placed its trust in “reality as given,” science overlooks the self-evident fact that nothing can be experienced without consciousness. It is a more viable candidate for “reality as given” than the physical universe.” ― Deepak Chopra

9. “Cosmology is the study of the universe as a whole, including its birth and perhaps its ultimate fate.” ― Michio Kaku

10. “As all matter is crushed in the final moments before doomsday, intelligent life forms may be able to tunnel into higher-dimensional space or an alternative universe, avoiding the seemingly inevitable death of our universe.” ― Michio Kaku

11. “In other words, a star is a nuclear furnace, burning hydrogen fuel and creating nuclear “ash” in the form of waste helium. A star is also a delicate balancing act between the force of gravity, which tends to crush the star into oblivion, and the nuclear force, which tends to blow the star apart with the force of trillions of hydrogen bombs. A star then matures and ages as it exhausts its nuclear fuel.” ― Michio Kaku

12. “We recall that the warping of the bedsheet was determined by the presence of the rock. Einstein summarized this analogy by stating: The presence of matter-energy determines the curvature of the space-time surrounding it.” ― Michio Kaku

13. “Think of it as a parallel universe. But maybe it’s the real one, and we’re in a dream.” ― Joe Haldeman

14. “Imagination is the parallel universe of a writer. If he is not responding to you in this world, he is probably responding to someone in the imaginary world.” ― Heenashree Khandelwal

15. “We were back where I had started: on the hilltop inside a circle of trees burdened down with red berries that blew in the wind as if determined to remind me how much blood a body had in it and how the worst place to see it was flying through the air in droplets.” ― Aaron D. Key

16. “There is not one certain future, that much I know. Each of our lives creates what is to come. The universe is not a clock that has been set to run in one direction. It is a maze, a giant puzzle that changes and grows each time a player takes one path over another. Every time you make a choice, you make the future.” ― Brittney Ryan

18. “It was like I existed in a kind of parallel universe, thinking thoughts and feelings that no one else understood.” ― Lucy Christopher

19. “In the end, I sort of thought we created a companion who was so alive and dynamic and so wedded to the doctor that you’d need a whole universe to contain her in. The only way to get rid of her is to send her into a parallel world from which she can never return; otherwise, she would stay with the doctor forever.” ― Russell T. Davies

20. “In order to avoid believing in just one God we are now asked to believe in an infinite number of universes, all of them unobservable just because they are not part of ours. The principle of inference seems to be not Occam’s Razor but Occam’s Beard: “Multiply entities unnecessarily.” ― J. Budziszewski

21. “Don’t compare your actual self to a hypothetical self. Don’t drown in a sea of ‘what ifs’. Don’t clutter your mind by imagining other versions of you, in parallel universes where you made different decisions.” ― Matt Haig

22. “When the multiverse was confirmed, the spiritual and scientific communities both counted it as evidence of their validity. The scientists said, Look, we told you there were parallel universes. And the spiritual said, See, we’ve always known there was more than one life.” ― Micaiah Johnson

23. “The multiverse isn’t just parallel universes accessible through science. They are in each of us, a kaleidoscope made of varying perceptions.” ― Micaiah Johnson

24. “Fear manufactures a kind of parallel universe where the unreal seems real, and the real seem unreal.” ― Marianne Williamson

25. “In this scenario, the universe as we know it would merely be the latest in a temporal series, some of which may have contained intelligent life and the culture they created, but are now long ago extinguished. In due course, all of our contributions and those of any other life-forms our universe supports would be similarly erased.” ― Brian Greene

27. “When you realize that quantum mechanics underlies all physical processes, from the fusing of atoms in the sun to the neural firings that constitute the stuff of thought, the far-reaching implications of the proposal become apparent. It says that there’s no such thing as a road untraveled. Yet each such road—each reality—is hidden from all others.” ― Brian Greene

28. “There are parallel universes in which different events have happened to the same people. An alternate choice has been made, or an accident has turned out differently. Everyone has duplicates of themselves in these other worlds. Different selves with different lives, different luck.” ― E. Lockheart

30. “We’re all living in a parallel universe of what the world used to be.” ― Lauren DeStefano

31. “Quantum reality is not constrained to the realm of ultra-small. In a certain sense, we are all quantum wavicles meaning that a version of you can wildly vary from one observer to another. That’s where I’ve come to realize that observer systemic alternate timelines are true parallel universes.” ― Alex M. Vikoulov

32. “You don’t have to dream up some parallel universes to wish for a new romantic probability. There are plenty of options on this planet already, you are just too afraid, is all.” ― Et Imperatrix Noctem

What is parallel universe theory?

The parallel universe theory, also known as the multiverse theory, suggests that there may be an infinite number of parallel universes existing alongside our own. These universes may differ from our own in various ways, such as having different physical laws or different versions of ourselves. The theory suggests that these universes could be separated from our own by vast distances in space and time, but still interact with one another through various means such as quantum entanglement. The idea of parallel universes is still a topic of active research and debate in the scientific community and is not yet proven.

What is in a parallel universe?

Does the parallel universe exist?

What does it mean to live in a parallel universe?

How many parallel universes are there?

Who discovered the parallel universe?

What are some best movies based on the parallel universe?

How to enter a parallel universe?

At this moment, it is not currently possible to enter a parallel universe as the concept of parallel universes is still a topic of active research and debate in the scientific community and there is currently no concrete evidence to prove their existence.

50 Theology Quotes For Exploring the Depths of Divine Wisdom