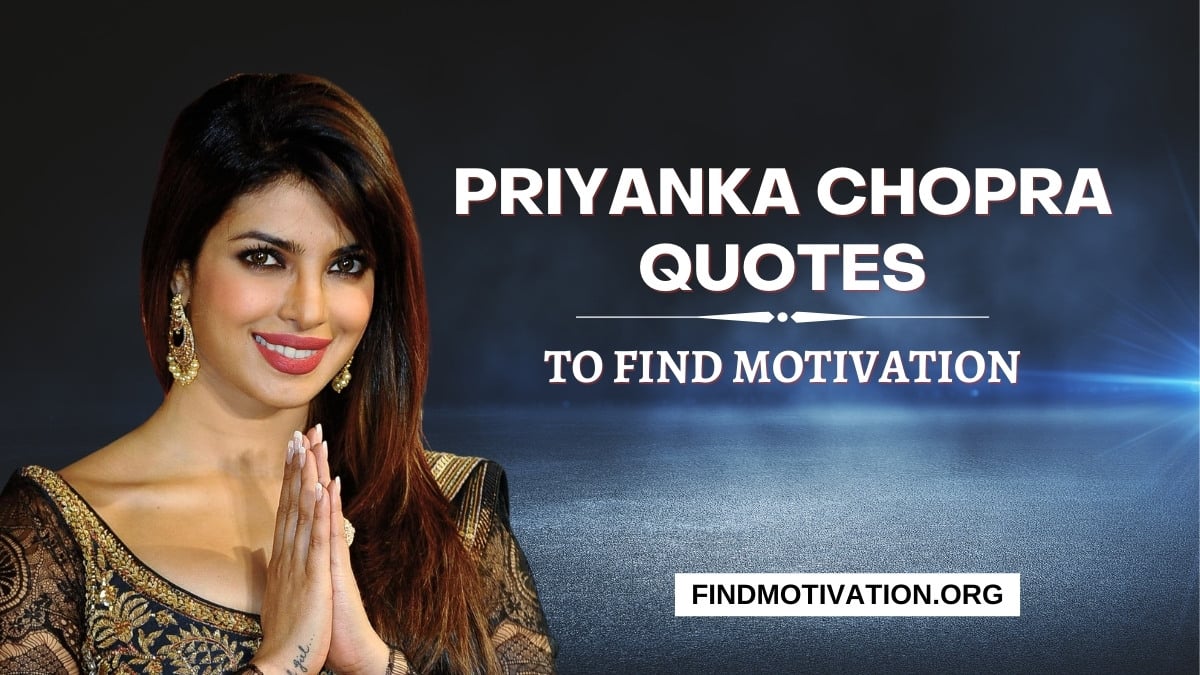 Read here Inspiring Quotes from Priyanka Chopra to find motivation in your life.

Priyanka was born on 18 July 1982 in Jamshedpur, Bihar. Her father Ashok Chopra and Madhu Chopra, both are physicians in the Indian Army. Due to the profession of Priyanka’s parents, her family was not able to survive in any one city. At the age of 13, Priyanka went to America to study and started living with her aunt. There Priyanka had to be a victim of color discrimination. During her studies, Priyanka’s classmates used to tease her about her brown color, and they used to call her browny. Priyanka Chopra says that till that time she was a shy girl and her self-confidence was low.

While in Massachusetts, USA, she participated in several theater productions and studied western classical music, and choral singing. Priyanka returned to India after three years and completed her high-school education at Army Public School in Bareilly.

Priyanka made her film debut in 2000 in the Tamil movie Thamizhan. In 2003, she entered Bollywood through the movie The Hero: Love Story of a Spy. From that till now Priyanka worked in many films. Today she is one of the most successful actresses of Bollywood. Along with Bollywood, she has also made her mark in Hollywood. Priyanka is one of the highest-paid and most popular actresses of India. She is also the founder of the production company Purple Pebble Pictures, under which she has produced several regional Indian films.

Priyanka also promotes social causes such as the environment and women’s rights and is vocal about gender equality, the gender pay gap, and feminism. Priyanka has founded a foundation named “The Priyanka Chopra Foundation for Health and Education” to help children who are deprived of education and health. She donates ten percent of her earnings to the foundation’s operations. Priyanka often speaks on women’s issues and women empowerment.

Priyanka has received several awards for her work, including two National Film Awards and five Filmfare Awards. In 2016, the Indian government awarded her the Padma Shri. Time magazine named her one of the 100 most influential people in the world, and over the next two years, Forbes listed her among the 100 most powerful women in the world.

2. “My mom always says that when a woman is financially independent, she has the ability to live life on her own terms. I think that was the soundest advice that I ever got.” ― Priyanka Chopra

3. “No matter where you go in life or who you get married to, you have to be financially independent – whether you use it or not.” ― Priyanka Chopra

4. “Any transition is easier if you believe in yourself and your talent.” ― Priyanka Chopra

5. “I believe in myself and my art so much. I’ve always trusted destiny. Wherever it takes me, I just work damn hard at the opportunity.” ― Priyanka Chopra

7. “I was studying to be an engineer when my mom and my brother sent my pictures for the Miss India contest. I didn’t even know about it. If that isn’t destiny, what is?” ― Priyanka Chopra

8. “Don’t try to squeeze into a glass slipper. Instead, shatter the glass ceiling.” ― Priyanka Chopra

9. “I think it’s great to be flawed. I am hugely flawed, and I like it this way. That’s the fun of life. You fall, get up, make mistakes, learn from them, be human and be you.” ― Priyanka Chopra

10. “I wasn’t even prepared to be an actress. I was 17 when I came out of high school, and suddenly became Miss World and then I became an actress.” ― Priyanka Chopra

11. “People keep speculating about my personal life because I am evasive about it.” ― Priyanka Chopra

12. “I have never had a plan when it comes to my career: America came to me with an opportunity.” ― Priyanka Chopra

13. “You can be an absolute woman and also be smart and tough and not lose your femininity.” ― Priyanka Chopra

14. “As an entertainer, I try to do projects that reflect a woman having the ability to stand up for herself.” ― Priyanka Chopra

15. “I wasn’t the prettiest girl in the room, but I learned to carry myself with confidence – that’s how you make the best impression on people.” ― Priyanka Chopra

16. “You’ve got to teach yourself to take over the world.” ― Priyanka Chopra

17. “I taught myself confidence. When I’d walk into a room and feel scared to death, I’d tell myself, ‘I’m not afraid of anybody.’” ― Priyanka Chopra

18. “I don’t come from a film background. I haven’t learned anything about films or film-making. But I have a thirst to know everything about my profession.” ― Priyanka Chopra

19. “Guess girls are normally blonde, blue-eyed bombshells. It was nice to be a brunette one.” ― Priyanka Chopra

21. “When it comes to an everyday situation, I am like an ant. I keep putting money aside because I know that if I want to splurge, there is a big mountain of money that I can use.” ― Priyanka Chopra

22. “Education has always been very important to me. It means you don’t have to depend on anyone else.” ― Priyanka Chopra

23. “To be a philanthropist, you don’t have to be Nelson Mandela. You just have to look around you and ask, ‘What little bit can I do? Whose life can I touch?’” ― Priyanka Chopra

24. “It is in my nature to give the work I have all the discipline and due diligence that I am capable of.” ― Priyanka Chopra

25. “After I won Miss India, I realized I do not like failing. I just like being the best. I hate being a loser. So I just have to keep winning.” ― Priyanka Chopra

26. “When I became Miss World, I couldn’t believe I had won it. I used to sleep with my crown because I was scared someone would steal it. In a minute, the world changed for me.” ― Priyanka Chopra

27. “For me, style is always a representation of what you want to wear but doing it in a unique way and expressing yourself. Every girl loves to be stylish.” ― Priyanka Chopra

28. “Beauty and fashion are not really local anymore. You really have to be a global citizen to know what trends are.” ― Priyanka Chopra

29. “My career is the sum of the decisions I have made.” ― Priyanka Chopra

30. “Everyone can work hard, but I work on my own terms.” ― Priyanka Chopra

33. “I’m really strict with my skincare regimen. No matter what’s happening in my life, I wash my face every single night and I moisturize – even if it’s 4 A.M.” ― Priyanka Chopra

34. “Art is collaboration: we are artists all over the world.” ― Priyanka Chopra

35. “Art should not be bound by barriers or language. The Hindi film industry is a testament to that.” ― Priyanka Chopra

36. “We speak only Hindi, but we premiere in Germany and Japan. Our films do phenomenally well there. We transcend the barriers of language and culture. We welcome you in. I think that’s what art should be.” ― Priyanka Chopra

37. “I think art cannot be planned. The audience is too smart to get the dishonesty or ‘too much planning’ thing.” ― Priyanka Chopra

38. “You need to feel comfortable. When you’re comfortable, you feel confident. And when you’re confident, the world is your oyster. Most importantly, you gotta feel what you wear.” ― Priyanka Chopra

41. “I can’t eradicate poverty, but at least for the people around me, I can help make sure no child is denied a dream.” ― Priyanka Chopra

42. “As a girl, I am this stupid, emotional, very loyal, sort of believe-in-values-and-principals sort of girl.” ― Priyanka Chopra

43. “The writers are the backbone in television, like in the film.” ― Priyanka Chopra

Final Words: I hope you liked the above Priyanka Chopra Quotes. Don’t forget to mention the best line that you liked most from the above lines in the comment box below.

Seriously Simple Stuff to Get You Unstuck Quotes to Move forward