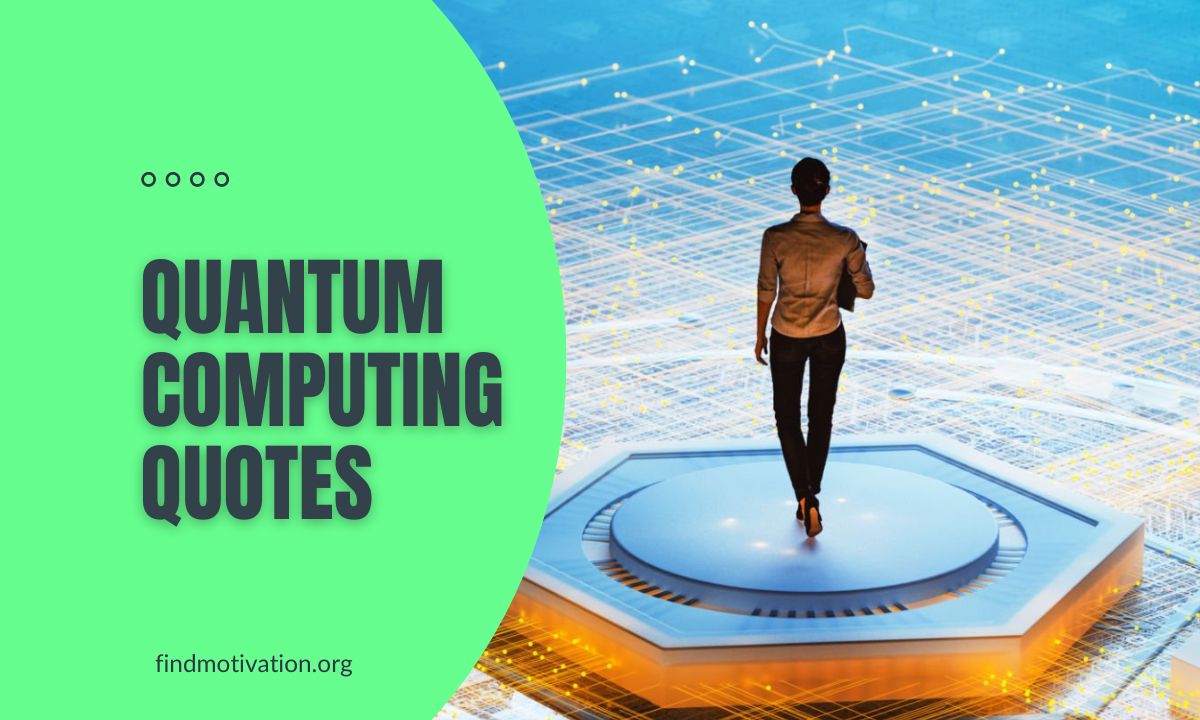 Quantum computing is a revolutionary technology that has the potential to change the world as we know it. It is based on the principles of quantum mechanics, which allows for the manipulation of quantum bits (qubits) to perform complex calculations at a speed that is orders of magnitude faster than traditional computing. These quotes from experts in the field offer insight into the potential impact of quantum computing and the challenges that still need to be overcome. From the words of renowned scientists and tech leaders to the musings of science fiction authors, these quotes provide a glimpse into the world of quantum computing and the possibilities it holds.

You can also read other quotes such as Optical Delusion Quotes and Understanding the World Quotes.

1. “The world has been changing even faster as people, devices, and information are increasingly connected to each other. Computational power is growing and quantum computing is quickly being realized. This will revolutionize artificial intelligence with exponentially faster speeds. It will advance encryption. Quantum computers will change everything, even human biology.” ― Stephen Hawking

3. “Quantum computers that would boggle your mind, space elevators that raise heavy cargo through the air and into orbit, tourist trips to the moon, teleportation—all of these things will happen in the not-too-distant future.” ― Gary Renard

4. “As mentioned before, quantum mechanics guarantees that any physical system with finite energy confined to a finite volume of space has a finite number of distinguishable states and therefore will register a finite number of bits.” ― Seth Lloyd

5. “‎By 2100, our destiny is to become like the gods we once worshipped and feared. But our tools will not be magic wands and potions but the science of computers, nanotechnology, artificial intelligence, biotechnology, and most of all, the quantum theory.” ― Michio Kaku

6. “The purpose of quantum computing-based compassionate artificial intelligence is to develop integrated systems that can preserve and enhance human values of peace, love, happiness, and freedom.” ― Amit Ray

7. “The disruptive potential of quantum technology will make the change of the Internet era look like a small bump in the road!” ― Kevin Coleman

8. “If we try to make general inferences about the theoretical possibility of a reliable computational model of the brain, we ought indeed to come to terms with the mysteries of quantum theory.” ― Roger Penrose

10. “Quantum Machine Learning is defined as the branch of science and technology that is concerned with the application of quantum mechanical phenomena such as superposition, entanglement, and tunneling for designing software and hardware to provide machines the ability to learn insights and patterns from data and the environment, and the ability to adapt automatically to changing situations with high precision, accuracy and speed.” ― Amit Ray

11. “The beauty of quantum machine learning is that we do not need to depend on an algorithm like gradient descent or convex objective function. The objective function can be nonconvex or something else.” ― Amit Ray

13. “Simulating the behavior of 100 billion neurons of the human brain is not feasible by classical computer but quantum machine learning promises to fulfill that requirement.” ― Amit Ray

14. “The significance of a bit depends not just on its value but on how that value affects other bits over time, as part of the continued information processing that makes up the dynamical evolution of the universe.” ― Seth Lloyd

15. “The Universe is a quantum computer, and over time, it is simply more likely that structure comes out of it than noise. That means rules and patterns. That means a game. But spend long enough poking at it, and you start to see the game engine, the labyrinth of the quantum circuit, wires looping around each other, forwards and backward.” ― Hannu Rajaniemi

18. “I believe in the song of the white dove. On the threshold of new technologies like artificial intelligence, quantum computing, and nuclear warfare, the human species are in new danger. There is an urgent need for superhuman compassion in machines.” ― Amit Ray

20. “There is no glory in using technologies like artificial intelligence, swarm drones, and quantum computing for developing mass destruction weapons. Our glory lies in using technologies and AI for embracing all, generating love and happiness, and removing the pain of humanity.” ― Amit Ray

21. “We’ve known since 2007 that there’s superposition in chlorophyll, for instance. Photosynthesis has a ninety-five percent energy-transfer efficiency rate, which is better than anything we can engineer. Plants achieve that by using superposition to simultaneously try all the possible pathways between their light-collecting molecules and their reaction-center proteins so that energy is always sent down the most efficient route; it’s a form of biological quantum computing.” ― Robert J. Sawyer

22. “On the other hand, if someone gave me a practical quantum computer tomorrow, then I confess that I can’t think of anything that I, personally, would want to use it for only things that other people could use it for!” ― Scott Aaronson

23. “Recently proposed algorithms that involved hiding an encryption key at the intersection point of a multi-dimensional lattice should prove unbreakable, even for a quantum computer.” ― Douglas E. Richards