32 Quantum Physics Quotes For Exploring the Depths of Reality 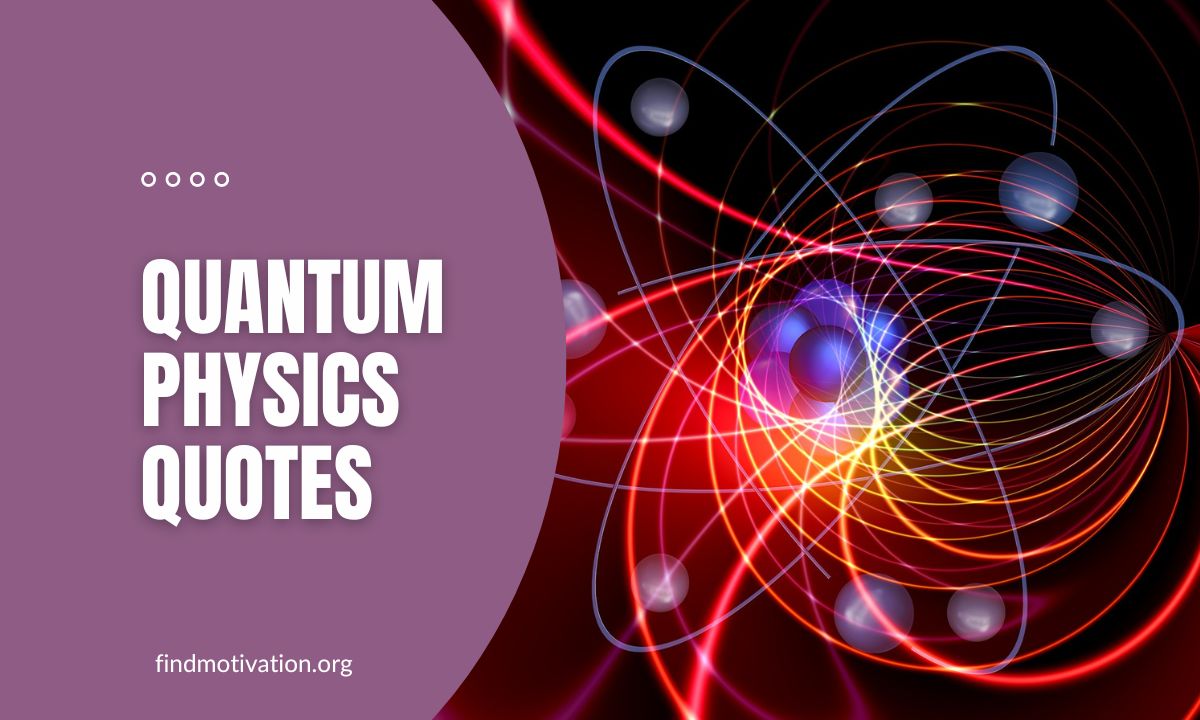 Quantum physics is a branch of physics that delves into the fundamental nature of the universe and the behavior of matter and energy on a subatomic level. It is a fascinating field that has led to many groundbreaking discoveries and has challenged our understanding of the world around us. In this collection of quotes, we will explore the thoughts and insights of some of the most prominent figures in quantum physics, including Albert Einstein and Stephen Hawking, as they share their perspectives on the nature of reality, the limits of knowledge, and the power of the human mind.

You can also read other related quotes such as Quantum Mechanics and Quantum Computing Quotes.

1. “The cosmos is within us. We are made of star stuff. We are a way for the universe to know itself.” ― Carl Sagan

2. “God does not play dice with the universe.” ― Albert Einstein

4. “That deep emotional conviction of the presence of a superior reasoning power, which is revealed in the incomprehensible universe, forms my idea of God.” ― Albert Einstein

5. “Not only does God play dice but… he sometimes throws them where they cannot be seen.” ― Stephen Hawking

6. “Quantum physics was put together on a Friday afternoon. That’s why humanity will never figure it out. Some of the bits are the wrong way round.” ― Dave Turner

7. “Time sits at the center of the tangle of problems raised by the intersection of gravity, quantum mechanics, and thermodynamics.” ― Carlo Rovelli

9. “Whether you’re studying chakras or quantum physics, you come to learn that everything is energy, with its own vibrational frequency.” ― Margarita Alcantara

10. “Enlightenment is like quantum tunneling – when everyone sees walls and barriers, enlightened one sees infinite possibilities.” ― Amit Ray

11. “Quantum theory can explain that every black hole is a collapse of some vanishing functions due to the interference of a matrix of cosmic attention functions.” ― Amit Ray

12. “‎In modern physics, there is no such thing as “nothing.” Even in a perfect vacuum, pairs of virtual particles are constantly being created and destroyed. The existence of these particles is no mathematical fiction. Though they cannot be directly observed, the effects they create are quite real. The assumption that they exist leads to predictions that have been confirmed by experiment to a high degree of accuracy.” ― Richard Morris

13. “The world of every day suddenly seemed nothing but an inverted magic act, lulling its audience into believing in the usual, familiar conceptions of space and time, while the astonishing truth of quantum reality lay carefully guarded by nature’s sleights of hand.” ― Brian Greene

14. “Physical reality does not require that we be pleased with its mechanism; we must see the implications of a theory for what they are and not for what we would like them to be.” ― Kevin Michel

15. “Seriousness of mind was a prerequisite for understanding Newtonian physics. I am not convinced it is not a handicap in understanding quantum theory.” ― Connie Willis

16. “Quantum Mechanics doesn’t deserve the connotation of spookiness in the sense of some ineffable mystery that it is beyond the human mind to comprehend. Quantum Mechanics is amazing; it is novel, profound, mind-stretching & a very different view of reality from what we’re used to.” ― Sean Carroll

17. “Quantum physics is not replaced by another sort of physics at large scales. It actually gives rise to classical physics. Our every day, the commonsense reality is, in this view, simply what quantum mechanics looks like when you’re six feet tall.” ― Philip Ball

19. “The basic ingredients of quantum physics are: paying attention, thinking and choosing, and consequence.” ― Caroline Leaf

20. “In the world of the very small, where particle and wave aspects of reality are equally significant, things do not behave in any way that we can understand from our experience of the everyday world…all pictures are false, and there is no physical analogy we can make to understand what goes on inside atoms. Atoms behave like atoms, nothing else.” ― John Gribbin

21. “The more we delve into quantum mechanics the stranger the world becomes; appreciating this strangeness of the world, whilst still operating in that which you now consider reality, will be the foundation for shifting the current trajectory of your life from ordinary to extraordinary. It is the Tao of mixing this cosmic weirdness with the practical and physical, which will allow you to move, moment by moment, through parallel worlds to achieve your dreams.” ― Kevin Michel

22. “The law of sympathy is one of the most basic parts of magic. It states that the more similar two objects are, the greater the sympathetic link. The greater the link, the more easily they influence each other.” ― Patrick Rothfuss

25. “Trying to change situations or conditions solely with action in the world would be like trying to fix an unwanted image in the mirror without changing what’s being reflected. It just doesn’t work.” ― Larry Gottlieb

27. “Quantum reality is not constrained to the realm of ultra-small. In a certain sense, we are all quantum wavicles meaning that a version of you can wildly vary from one observer to another. That’s where I’ve come to realize that observer systemic alternate timelines are true parallel universes.” ― Alex M. Vikoulov

28. “As far as quantum field theory is concerned, a human being or the center of a star isn’t all that different from empty space.” ― Sean Carroll

29. “A new philosophy emerged called quantum physics, which suggests that the individual’s function is to inform and be informed. You really exist only when you’re in a field sharing and exchanging information. You create the realities you inhabit.” ― Timothy Leary

30. “Quantum theory provides us with a striking illustration of the fact that we can fully understand a connection though we can only speak of it in images and parables.” ― Werner Heisenberg

31. “At the present time no exceptions are found to the quantum-electrodynamic laws outside the nucleus, and there we do not know whether there is an exception because we simply do not know what is going on in the nucleus.” ― Richard Feynman

32. “What is particularly curious about quantum theory is that there can be actual physical effects arising from what philosophers refer to as counterfactuals-that is, things that might have happened, although they did not in fact happen.” ― Roger Penrose

18 ‘It’s The Tip of The Iceberg’ Quotes: Know Its Meaning