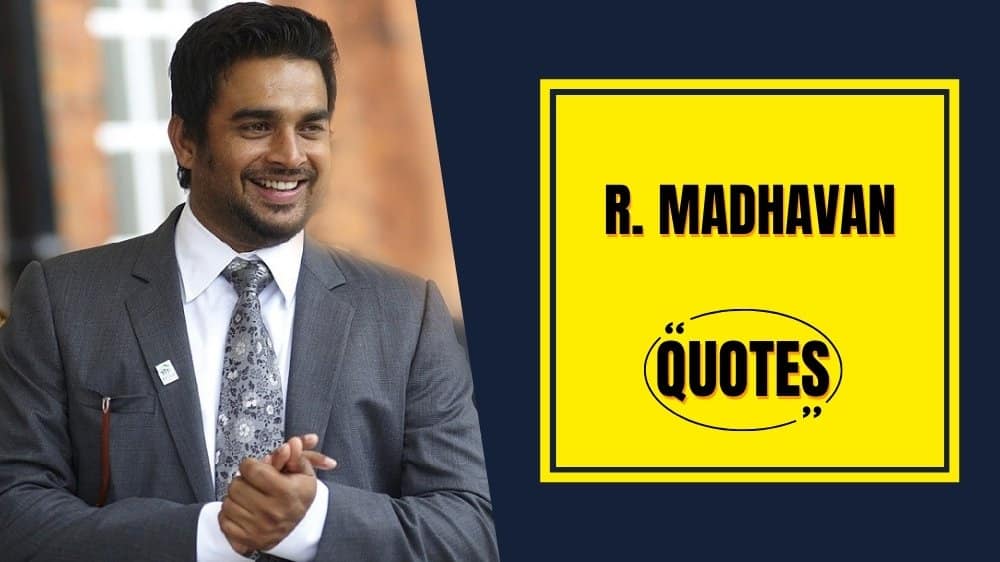 Read here inspiring quotes by R Madhavan to get inspiration about topics such as life, family, life, struggle, the importance of work.

Before coming to the film industry, R. Madhavan was a public speaking and personality development coach. He also won the Indian Championship for Public Speaking and subsequently represented India at the Young Businessmen Conference in Tokyo, Japan in 1992.

He began his acting career in the early 1990s. He gained recognition in Tamil cinema by playing the lead role in the film Alaipayuthey. Also, he got his filmy success in many Hindi films such as Rang De Basanti, Guru, 3 Idiots, Tanu Weds Manu, Tanu Weds Manu Returns.

He is one of the few actors in India who is appearing in films from seven different languages.

1. “I always believe that the elders in my family are the reason for my success.” ― R. Madhavan

2. “It is not easy to lose or gain weight. The diet and the exercise regime should be compatible with your body, or else you end up with wrinkles and hair loss.” ― R. Madhavan

3. “I learned different ways of working out. I learned a lot about my body.” ― R. Madhavan

4. “Success, or the lack of it, has a way to make you realize what your boundaries are.” ― R. Madhavan

5. “I am an extremely selfless but, at the same time, supremely confident actor.” ― R. Madhavan

6. “There is a difference between being educated and academics.” ― R. Madhavan

7. “One needs to be super intelligent and have an above-average IQ to be able to work in movies.” ― R. Madhavan

8. “People have this misconception that people with six-pack abs can deliver hits, but that’s not the case.” ― R. Madhavan

10. “I have been very cautious about the films that I do. I hope to always entertain my audience. The day I am not able to do that, I will quit acting.” ― R. Madhavan

11. “I am one of those really short-tempered people, but I don’t lose it unless it is justified.” ― R. Madhavan

12. “I am not someone who would raise my voice to seek publicity. I am a responsible citizen, and I continue to be so.” ― R. Madhavan

13. “When you go into the realm of a double role, you have to take it to another level to make it believable.” ― R. Madhavan

14. “When it comes to filmmaking, we have to deal with ego, anger, and a lot more; barring all these, how the team works towards the outcome matters.” ― R. Madhavan

15. “I think new directors come with new perceptions, energy, and passion to win. They don’t have to worry about an already existing image or budget that they have to recover.” ― R. Madhavan

16. “I’ve realized that to make a successful film, you have to be with a unit that is happy and positive from the beginning.” ― R. Madhavan

17. “I told my wife that I want to take a three-year break. She supported me and said, ‘Please go ahead.’ I am grateful that she supported me. “For me, this romance and understanding are very important in our marriage.” ― R. Madhavan

19. “I do not like to be treated like someone special – and this I say because I am normal and not because I want to sound humble.” ― R. Madhavan

20. “It took me 15 years of being in the industry to know that you need makeup and styling when you go out, that you need to have PR.” ― R. Madhavan

21. “There is a time in every actor’s life when he has to face the self-created hurdle after he starts getting bored of work and suddenly realizes that he is left behind.” ― R. Madhavan

22. “Actually, nobody has ever given me an award, and also, it’s not really important in my life. I go to these award shows for meeting my friends.” ― R. Madhavan

23. “Acting is like any other profession. I do not think stars need to have any hang-ups in public.” ― R. Madhavan

25. “Films are my life; I don’t think there is anything that I would not do for the sake of the movie.” ― R. Madhavan

28. “If you do not have a good script, then no matter what the genre is, the film will not be a success.” ― R. Madhavan

29. “I value my independence a lot, and the thought of having to lose that due to age or any other reason terrifies me.” ― R. Madhavan

30. “All of us wish for dignity that commands respect. But few have it.” ― R. Madhavan

31. “I struggle on many fronts with having to move to a different level, having to cater to constantly evolving audiences.” ― R. Madhavan

32. “I have always acted in films where women have an equal, if not bigger, role than mine. Don’t the kind of films you do reflect your personality?” ― R. Madhavan

Final Words: I hope you liked the above R Madhavan Quotes. Don’t forget to mention the best line that you liked most from the above lines in the comment box below.

40 Elon Musk Inspiring Quotes to work like a visionary