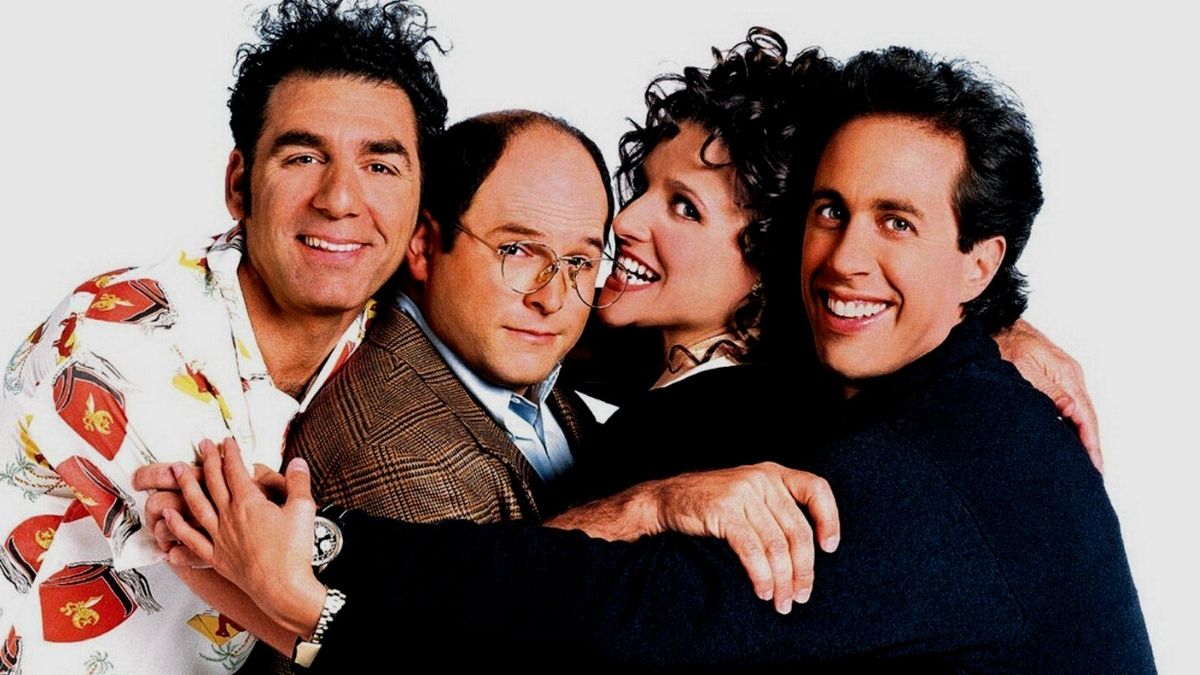 1. According to a conversation between Jerry and Elaine, what’s the magic number of dates when a face-to-face breakup is required?

2. According to George, which NYC institution has “magnificent facilities?”

3. At one point, how does Elaine assess whether a man is worth having sex with?

4. By what the first name does Kramer go on the American show?

Answer: Cosmo Kramer is more commonly known as Kramer in the ‘Seinfeld’ series.

5. During surgery, what candy is accidentally dropped into Elaine’s boyfriend’s open abdomen?

6. George got what teacher fired?

7. How does Jerry feel about people who own ponies?

Answer: He hates them.

8. How is Frank Costanza related to George Costanza in the ‘Seinfeld sitcom?

Answer: In this sitcom, George Costanza is portrayed as the son of Frank Costanza.

9. How many episodes are there of Seinfeld?

10. How many seasons does the ‘Seinfeld’ show have in total?

Answer: The ‘Seinfeld show has a total of 9 seasons.

11. How much money does Kramer make upon originally selling his life stories?

12. In real life, who is the person who performs the role of Cosmo Kramer?

Answer: The person who enacts the role of Kramer in the show is Michael Richards.

13. In which episode did Elaine first appear?

Answer: The Stake Out

14. In which episode did Newman feature for the first time?

15. In which episode(s) of the sitcom did Kramer not appear?

Answer: The two episodes in which Kramer did not feature are The Pen and The Chinese Restaurant.

16. In which of the sitcom episodes did George Costanza not feature?

Answer: The one episode in the show in which George Costanza did not appear is the 20th episode. This episode is otherwise the third in the 3rd season.

17. In which season can you find the episode ‘The Puffy Shirt’?

Answer: The Puffy Shirt’ was the 2nd episode in the 5th season.

18. In which season does the episode The Bizarro Jerry air?

Answer: The Bizarro Jerry airs in the eighth season of the ‘Seinfeld show.

19. Of Jerry’s many shallow complaints about the women he dates, what petty thing bothers him about his girlfriend Gillian?

20. Seinfeld is often described as a show about what?

21. What are the names of George’s fictitious horses?

Answer: The Tropic of Cancer

23. What car does Jerry buy for this dad?

24. What causes George’s mother, Estelle, to throw out her back?

25. What day of the week did Jerry take over Newman’s mail route?

26. What did George scream when he was caught in a compromising position after a swim in the pool?

28. What does George want to name his future son?

29. What does Kramer want his tombstone to say?

30. What flavor of babka is the “lesser babka?”

Answer: According to Elaine, cinnamon is the lesser babka.

31. What former child actor does Kramer try to force into reading his script?

32. What happens during Schindler’s List that gets Jerry in a bit of hot water with Newman?

Answer: He’s caught making out with his girlfriend.

33. What happens when Jerry eats the black and white cookie?

Answer: He pukes for the first time in more than ten years.

35. What is Jerry’s apartment number?

39. What is the combined length of all the episodes in this series?

40. What is the fake name George uses throughout the series?

41. What is the first name of Jerry Seinfeld in ‘Seinfeld’?

Answer: In ‘Seinfeld,’ Jerry Seinfeld’s first name is Jerry, and he starred in the show with his real name.

42. What is the full name of the character played by Julia Louis Dreyfus?

43. What is the name of Elaine’s boyfriend whom she wants to change his name because it is the same as a serial killer?

44. What is the name of one of the supporting characters in the sitcom?

Answer: Jackie Chiles is one of the major supporting characters in the NBC series.

45. What is the name of the actor who stars as Costanza in ‘Seinfeld’?

Answer: The person who starred in the ‘Seinfeld’ show as George Costanza is Jason Alexander.

46. What is the name of the concluding episode of the sitcom?

Answer: The final episode in this series is called “The Finale”.

47. What is the name of the episode in which Jason Alexander did not make an appearance in the ‘Seinfeld show?

Answer: The episode in which Costanza did not feature is named ‘The Pen’.

48. What is the name of the person who performs the role of Frank Costanza?

Answer: It is Gerald Issac Stiller who plays the character of Frank Costanza.

49. What is the name of the person, in real life, who plays the character of Elaine in Seinfeld?

Answer: Julia Louis Dreyfus plays the role of Elaine in the ‘Seinfeld’ show.

50. What is the name of the second episode of season 2 of this NBC (National Broadcasting Company) series?

Answer: The second episode of season 2 of this sitcom is known as “The Stake Out.”

51. What is the name of two of Jerry Seinfeld’s friends?

Answer: Jerry Seinfeld is friends with Elaine, George, and Kramer.

52. What is the occupation George continually fakes having?

54. What is the tagline for Festivus?

Answer: “Festivus for the rest of us!”

55. What is the total number of episodes in the American show?

Answer: The total number of episodes in the American show amounts to 180.

56. What mega-celebrity does George crash into and injure during a charity softball event?

57. What restaurant is Elaine banned from going to?

58. What STD does Kramer overdramatize in front of a group of med students?

59. What type of pasta did Kramer use to make his statue of Jerry?

60. What was the cause of death for George’s fiancée, Susan Rice?

Answer: She licked toxic glue while closing up the envelopes for her wedding invitations.

61. What was the date on which the series aired for the last time?

Answer: The sitcom aired its concluding and final episode on May 14, 1998.

62. What was the name of the clown played by guest star Jon Favreau?

63. What was the name of the episode in which Jerry and Elaine traveled to Jerry’s parents’ place?

Answer: It says, “ASSMAN” and was meant for a proctologist.

65. What’s the first and last thing the group of friends discusses during the pilot and finale episodes?

67. What’s the name of “the coffee shop” where Jerry and his friends spend a lot of their time?

69. What’s the only episode in which you don’t see George?

70. When given the chance to be interviewed by Bryant Gumbel on The Today Show, what ruins the interview and sends Gumbel into giggles?

71. When his favorite shirt falls apart after one too many washes, how does Jerry replace him?

73. Where did George Costanza famously pull out a golf ball from?

74. Where did the series begin to air for the first time?

75. Where does Elaine work and what does she do?

76. Where does Kramer find the set from The Merv Griffin Show?

77. Which ‘Seinfeld season has the least number of episodes?

Answer: Season 1 of ‘Seinfeld’ has the least number of episodes, that is, 5.

79. Which character in the series is based on Jerry’s friend Larry?

Answer: The character of George is based on Jerry’s actual friend and comedian, Larry.

80. Which character has a dance named after them?

81. Which character in David’s sitcom does not have a first name?

Answer: It is the main antagonist, Newman, whose name is kept obscured for the entirety of the sitcom.

82. Which Entourage star once guest-starred on Seinfeld?

83. Which episode in this series was decided to be put off-air?

Answer: It is “The Puerto Rican Day”, the 20th episode in season 9.

84. Which episode of this series was dropped?

Answer: The 4th episode of season 2 was formerly decided to be ‘The Bet’, but it was dropped in-between, and ‘The Phone Message’ was finalized instead.

85. Which guest star said, “They’re real and they’re spectacular” when speaking of her own breasts?

86. Which main cast member does not appear in the pilot?

87. Which song does Elaine try to make “her song?”

88. Who died from licking envelopes?

89. Who does Elaine consider as her best friend in ‘Seinfeld’?

90. Who does George want to name his future son after?

91. Who does Jerry describe as his nemesis and “pure evil?”

92. Who has stress-induced incontinence?

Answer: He moves everyone’s cars to the other side of the street on “alternate sides” street cleaning days.

97. Who is the antagonist in this American sitcom mainly produced by David?

Answer: One of the most important antagonists in Jerry’s sitcom is Newman.

98. Who is the inspiration for George’s name?

Answer: It was Mike Costanza.

99. Who plays the character of Sidra Holland on this NBC sitcom?

Answer: The person who played the role of Sidra Holland on these series was Teri Hatcher.

100. Who plays the role of Jerry’s mother on the sitcom?

Answer: It was Liz Sheridan who played the role of Jerry’s mother.