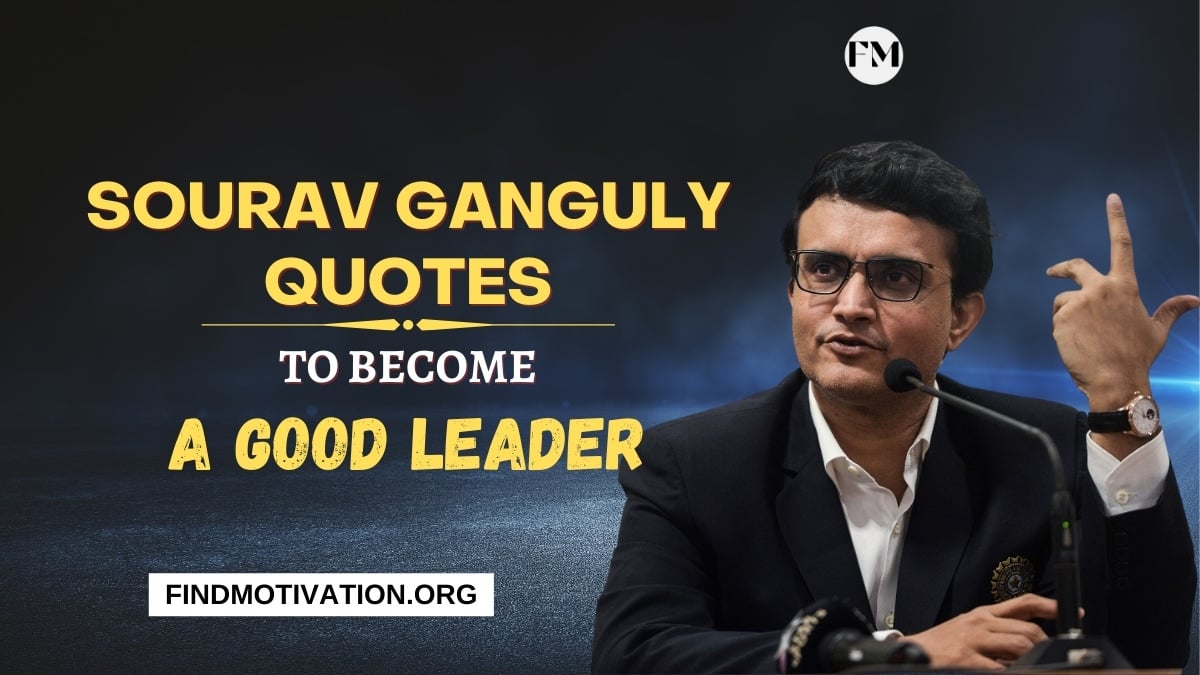 Sourav Ganguly is born on 8 July 1972. He played as a left-handed opening batsman and was captain of the Indian national team. Ganguly was introduced into the world of cricket by his elder brother, Snehasish. He started his career by playing in state and school teams. After playing in different Indian domestic tournaments, such as the Ranji and Duleep trophies, Ganguly got his big break while playing for India.

He was made captain of the Indian cricket team after Sachin Tendulkar. He is regarded as one of India’s most successful captains in modern times, and one of the greatest ODI batsmen of all time.

Currently, he is the 9th highest run-scorer in One Day Internationals and was the 3rd batsman in history to cross the 10,000 run landmark, after Sachin Tendulkar and Inzamam Ul Haq. In 2002, the Wisden Cricketers’ Almanack ranked him the sixth greatest ODI batsman of all time, next to Viv Richards, Sachin Tendulkar, Brian Lara, Dean Jones, and Michael Bevan.

Sourav Ganguly is the most successful Indian test captain overseas with 11 wins. The Indian team was ranked eighth in the ICC rankings before he became the captain, and under his tenure, the team rank went up to second. Ganguly is credited with having nurtured the careers of many young players who played under him and transforming the Indian team into an aggressive fighting unit.

Ganguly received the award Padma Shri in 2004, the Banga Bibhushan Award from the Government of West Bengal on 20 May 2013.

During his playing career, Ganguly established himself as one of the world’s leading batsmen and also one of the most successful captains of the Indian national cricket team. He is affectionately known as Dada and also popularly honored as Maharaja of Indian Cricket.

1. “Captaincy is a long process. It takes its toll as time goes on.” ― Sourav Ganguly

2. “Any captain will take some time to settle down. Nobody is an outstanding leader straight away.” ― Sourav Ganguly

3. “When you captain you get involved in a lot of things. You’re trying to get the best out of players and subconsciously, without knowing, it gets to you.” ― Sourav Ganguly

4. “A captain sees you differently from the way you see yourself.” ― Sourav Ganguly

5. “You need a captain who can push you.” ― Sourav Ganguly

8. “One-day cricket must be taken with equal importance to Test cricket.” ― Sourav Ganguly

9. “I don’t believe in rankings. Sometimes the rankings surprise me. I don’t think it’s fair to judge a team on the basis of ranking.” ― Sourav Ganguly

11. “A good opening stand is always crucial for a team.” ― Sourav Ganguly

12. “No matter what, Test cricket will survive. I’ve always said Twenty20 would be popular but there will be a place for Test cricket.” ― Sourav Ganguly

13. “I was inspired by the way the Aussies played their cricket. It was no-holds-barred. They played to win.” ― Sourav Ganguly

14. “The moment a spinner gets turn he becomes dangerous.” ― Sourav Ganguly

15. “Twenty20 is a must for cricket. Without T20, cricket cannot survive.” ― Sourav Ganguly

16. “I love playing England. The teas at Lord’s are of good quality.” ― Sourav Ganguly

18. “The technique is essential in all formats of the game.” ― Sourav Ganguly

19. “The life of a sportsperson is approximately 14-15 years long and fatigue will be a part of it, but they have to manage that.” ― Sourav Ganguly

20. “In life when you get tested, when you get rejected by everyone, and when you get pushed aside, you actually get the best out of it. That has been a learning curve for me.” ― Sourav Ganguly

21. “There’s one must in life: whatever job you do, wherever you are, whatever age you have, how much experience you have, you have to keep performing at the top level otherwise someone else will take your place.” ― Sourav Ganguly

22. “Health starts in the head and goes to the heart and other parts of the body.” ― Sourav Ganguly

23. “Running-between-the-wickets is the ability to convert ones into twos, twos into threes, and threes into fours. And to reach the wickets on time.” ― Sourav Ganguly

24. “Mistakes do happen and life goes on.” ― Sourav Ganguly

25. “Everything in life is about standing up and making the most of your opportunities.” ― Sourav Ganguly

26. “I cherish my entire life. I’ve been blessed with a life full of good memories.” ― Sourav Ganguly

27. “For me, life is simple and consistent.” ― Sourav Ganguly

28. “Retirement is never easy. Because the thing you love most, the thing which you wanted to do for the best part of your life, you had to give up.” ― Sourav Ganguly

30. “Sometimes as a player, you do not want to get into a controversy.” ― Sourav Ganguly

Quotes on Fear of failure

33. “I wanted to take away the fear of failure from the youngsters because when I came into the Indian team I faced that pressure.” ― Sourav Ganguly

Related: How your fear of suffering limits your possibilities?

Quotes on Self Control

34. “When you play cricket for India, you are always under the scanner. You are always judged by others; you have to live up to it all.” ― Sourav Ganguly

Related: Self-control tips to control yourself

Quotes Be the best

35. “If you are considered as favorites, you have to stand up and deliver. You can’t make too many mistakes. You have to be the best.” ― Sourav Ganguly

Quotes on Live in the present

37. “I live in the present and do not look that far ahead.” ― Sourav Ganguly

Quotes on Self Motivation

39. “You know what you are doing is important, and that motivates you, helps you get going.” ― Sourav Ganguly

40. “One of my favorite sportsmen was Diego Maradona and every time I saw him play football you could see the passion in his heart.” ― Sourav Ganguly

41. “I was a firm believer that every cricketer needs to get a fair chance.” ― Sourav Ganguly

42. “Age is never a factor if talent is there.” ― Sourav Ganguly

Quotes on Human being

43. “We are all human beings. We are not machines that everything you put in comes out perfect.” ― Sourav Ganguly

1. “From keeping the opposing captain waiting at the toss, to playing verbal and mental games. He was a master at the Art of Games.” ― Kumar Sangakkara

2. “Sourav, the batsman was an attacker, Blessed with time and quick hands, a destructive square cut, and the most elegant cover drives.” ― Kumar Sangakkara

3. “Ganguly was the first captain that changed the perception of the way India played their cricket.” ― Steve Waugh

4. “Sourav’s greatest strength is his mind. He is hard-working, not only in the nets but also mentally. He bounces back.” ― Sachin Tendulkar

5. “Let me be honest to tell you that on the TV screen he looks different. He is a very warm person when you actually meet him.” ― MS Dhoni

6. “He has the ability to not only clear the ropes but even the stadium. Against spin my god, he is really a murder.” ― VVS Laxman

7. “Sourav is really the best captain of India has ever hard.” ― Kapil Dev

8. “Sourav Stood by me when when I was struggling, I owe a great deal to him. I can’t express my gratitude to him in words.” ― Virender Sehwag

9. “He is wonderful Batsmen and definitely the best captain that India can have. So far he has surpassed my expectations and continues to do so. You rarely come across people like Sourav, he is different. He is special. There can be just one Sourav Ganguly.” ― Harbhajan Singh

10. “Sourav is my favorite. His leadership against Australia in Australia was astonishing. I have great respect for him.” ― Ricky Ponting

11. “Whatever be the complex situation, The Indian team under Ganguly was moved to great heights. The fact of the matter is that Ganguly is determined to stay focused.” ― Brian Lara

13. “Sourav was a truly wonderful captain and donned the role of an intermediary between the players and the selectors to near perfection.” ― Javagal Srinath

14. “I have learned so much from Sourav. He has played 15 years of cricket. Sitting down with him and getting to know him is phenomenal.” ― David Hussey

15. “When you are seeing the Indian side with Ganguly in the lineup, you know it’s game on. You don’t have to like or dislike him. You have to respect him.” ― Steve Waugh

16. “Whatever I have seen his captaincy I liked it.” ― Arjuna Ranatunga

18. “Besides football, the only other game I ever took interest in was basketball, But never cricket. Sourav is the sole reason why I am a cricket lover today.” ― Bhaichung Bhutia

19. “He is a brilliant player and definitely a force to reckon with.” ― Wasim Akram

Final Words: I hope you liked the above Sourav Ganguly Quotes. Don’t forget to mention the best line that you liked most from the above lines in the comment box below.

Inspiring Quotes from “In My Own Words” by Mother Teresa