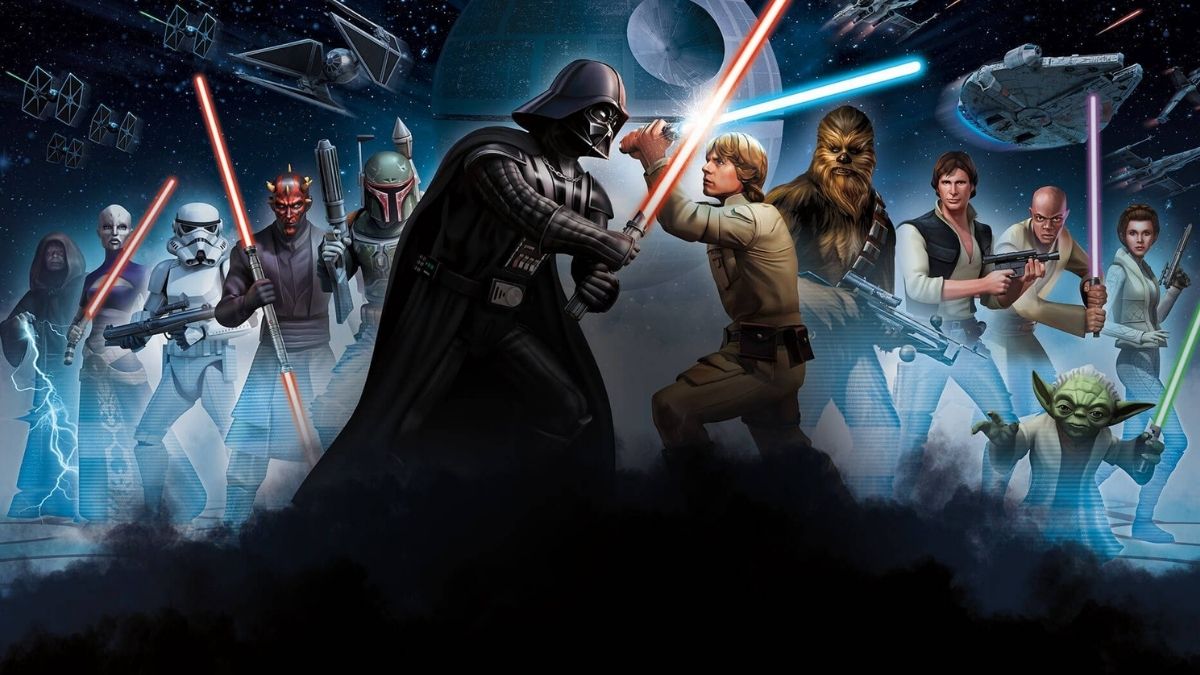 1. C-3PO claims to be fluent in over how many forms of communication? Answer: Over six million.

3. How many engines are on an X-wing fighter? Answer: 4

4. In The Book of Boba Fett what is the liquid Boba Fett sleeps in? Answer: A Bacta Tank

5. In The Force Awakens, what abandoned vehicle does Rey live in? Answer: AT-AT

6. In The Force Awakens, what kind of creature is Han Solo hauling on the freighter ship? Answer: Rathtars

7. In The Phantom Menace which race does Anakin win? Answer: The Boonta Eve Podrace

8. In The Rise of Skywalker Who is the black market droidsmith Poe knows on Kijimi? Answer: Babu Frik.

9. In which “Star Wars” movie do we first meet Jango Fett? Answer: Episode II: Attack Of The Clones.

10. In which “Star Wars” movie do we first meet Lando Calrissian? Answer: Episode V: The Empire Strikes Back.

12. In which “Star Wars” movie does Luke Skywalker first go to Dagobah to receive Jedi training? Answer: Episode V: The Empire Strikes Back.

13. In which “Star Wars” movie does Yoda show some fancy moves against Count Dooku? Answer: Episode II: Attack Of The Clones.

14. Jar Jar Binks makes his first appearance. Which “Star Wars” film does that happen in? Answer: Episode I: The Phantom Menace.

16. Lightsabers are powered by what type of crystal? Answer: Kyber crystal.

17. Luke lost which of his hands in a fight with Darth Vader? Answer: His right hand.

18. On what planet did General Grevious die? Answer: Utapau

19. On what planet do Han and Chewie meet Luke? Answer: Tatooine

20. On which planet do we first meet Rey in The Force Awakens? Answer: Jakku

23. What Animal do Han and Luke ride in the Snow on Hoth? Answer: Tauntaum

24. What are the creatures, living on Endor, that helped the Rebels to defeat the second Death Star? Answer: Ewoks

25. What are the dark side users of the Force called? Answer: The Sith

26. What cell number did Luke and Han rescue Princess Leia from in A New Hope? Answer: 2187

27. What color is Yoda’s lightsaber in Attack of the Clones and Revenge of the Sith? Answer: Green

28. What creature does Chewbacca roast for dinner in The Last Jedi? Answer: Porgs

29. What department did Finn work in as a stormtrooper? Answer: Sanitation

30. What does TIE Fighter stand for? Answer: Twin Ion Engine

33. What kind of fighters are flown by the Empire? Answer: TIE Fighters

34. What substance was Han Solo frozen in? Answer: Carbonite

35. What was the first location on which the Death Star’s destructive capability is tested? Answer: Jeddah

39. Anakin Skywalker grew up to be who? Answer: Darth Vader.

40. At what age did Padmé Amidala become a queen? Answer: 14 years old

43. Han Solo was frozen in what? Answer: Carbonite.

47. What approximate odds does C3PO give Han for successfully navigating the asteroid field? Answer: 3,720 to 1

49. What is Mando’s real name from The Mandalorian? Answer: Din Djarin.

50. What is the name of Han Solo’s ship? Answer: The Millennium Falcon.

51. What species is Chewbacca? Answer: Wookiee.

54. What was Galen Erso’s nickname for his daughter? Answer: Stardust.

57. Where is Jabba the Hutt’s Palace located? Answer: Tatooine.

58. Where was the first appearance of Boba Fett? Answer: The Star Wars Holiday Special.

59. Where was Yoda’s home in his final years? Answer: Dagobah.

60. Which pilot had the callsign RED 6 during the Battle of Yavin? Answer: Porkins

61. Who acted as Queen Amidala’s decoy? Answer: Her handmaiden Sabé.

65. Who had Rey’s parents taken and killed? Answer: Palpatine.

66. Who had the highest midi-chlorian count in Star Wars? Answer: Anakin Skywalker.

67. Who is Luke and Leia’s father? Answer: Darth Vader.

68. Who is Palpatine’s granddaughter? Answer: Rey.

70. Who preceded Senator Palpatine as Chancellor of the Galactic Senate? Answer: Finis Valorum