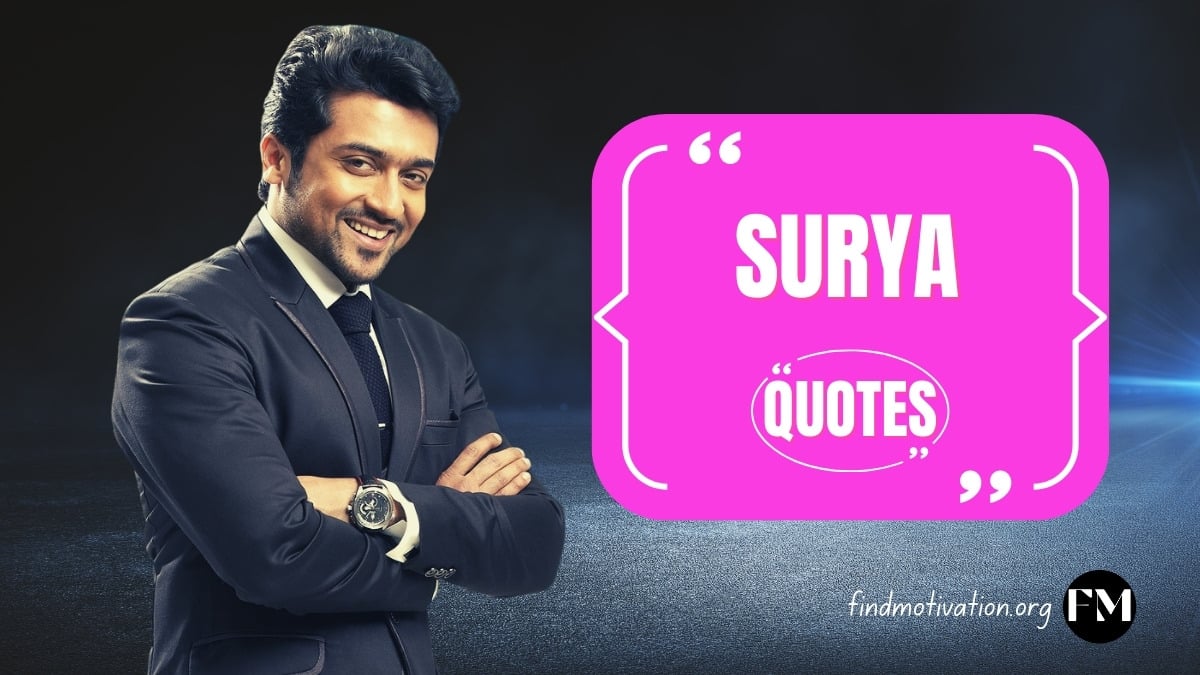 Read here inspiring quotes said by Surya that will help you to find motivation in your life.

Suriya is a famous Indian actor who works for Tamil cinema. His actual name is Saravanan Sivakumar. He is one of the highest-paid actors in the Tamil film industry.

How was Surya’s life journey?

Suriya was born on 23 July 1975 in Madras, Tamil Nadu. His father is film actor Sivakumar and his mother is Lakshmi. Before his career in films, Suriya worked at a garment export factory for eight months. To avoid nepotism, he did not reveal himself to his boss as he is Sivakumar’s son, but his boss ultimately learned the truth himself.

Surya made his film debut in the film Nerrukku Ner in 1997. He changed his name to Suriya to avoid the established actor Saravanan’s name. Because he wanted to create his own identity. In his initial days, Suriya faced a lot of problems like lack of confidence, memory power, fighting, or dancing skills. But he improved himself. Suriya got his first success in the film Nandha in 2001. He made many successful movies including Kaadhale Nimmadhi, Sandhippoma, Periyanna, Poovellam Kettuppar, Nandha, Kaakha Kaakha, Pithamagan, Ghajini, Vaaranam, Aayiram, Singam trilogy, 7aum Arivu, and 24. Suriya married Jyothika on 11 September 2006.

What has Surya achieved in his life?

Even after being the son of an actor, Surya changed his name to make him his own identity and he proved himself. His fans are all over India. He received awards including 3 Tamil Nadu State Film Awards, 4 Filmfare Awards South, 2 Edison Awards, 1 Cinema Express Award, and other awards. Suriya has been included in the Forbes India Celebrity 100 list six times based on his earnings.

Read below motivational quotes said by Surya on various topics to find motivation.

2. “I’m just trying to up my films – how every film should be better than the previous one. That’s what I struggle for.” ― Suriya

3. “I ask myself if I deserve what I have. What I have today is way more than I ever bargained for.” ― Suriya

4. “As for Hollywood, there was an offer. But I declined to do it because of certain moral and ethical values.” ― Suriya

5. “When people leave the theatre, they should remember a line, a character, a sequence, or an emotion. With entertainment, I want to give meaningful cinema.” ― Suriya

6. “I always make sure that every film of mine has some element of freshness to it.” ― Suriya

7. “A lot of young policemen have told me that they saw ‘Singam’ and joined the police force because of that. Some tell me they saw the training process and want to be a cop like that.” ― Suriya

8. “It is very important for both parents to spend quality time with their children.” ― Suriya

9. “My dad never had a bank balance of more than three lakh and was always extremely compassionate towards his producers.” ― Suriya

11. I try and imagine myself in situations and figure out how I’d have reacted and responded to them, and then bring that insight into my acting.” ― Suriya

12. Much of acting is about borrowing from your real-life experiences.” ― Suriya

13. Sixty percent of how you act is drawn from memories. And it’s about who you are.” ― Suriya

Final Words: I hope you liked the above Surya Quotes. Don’t forget to mention the best line that you liked most from the above lines in the comment box below.