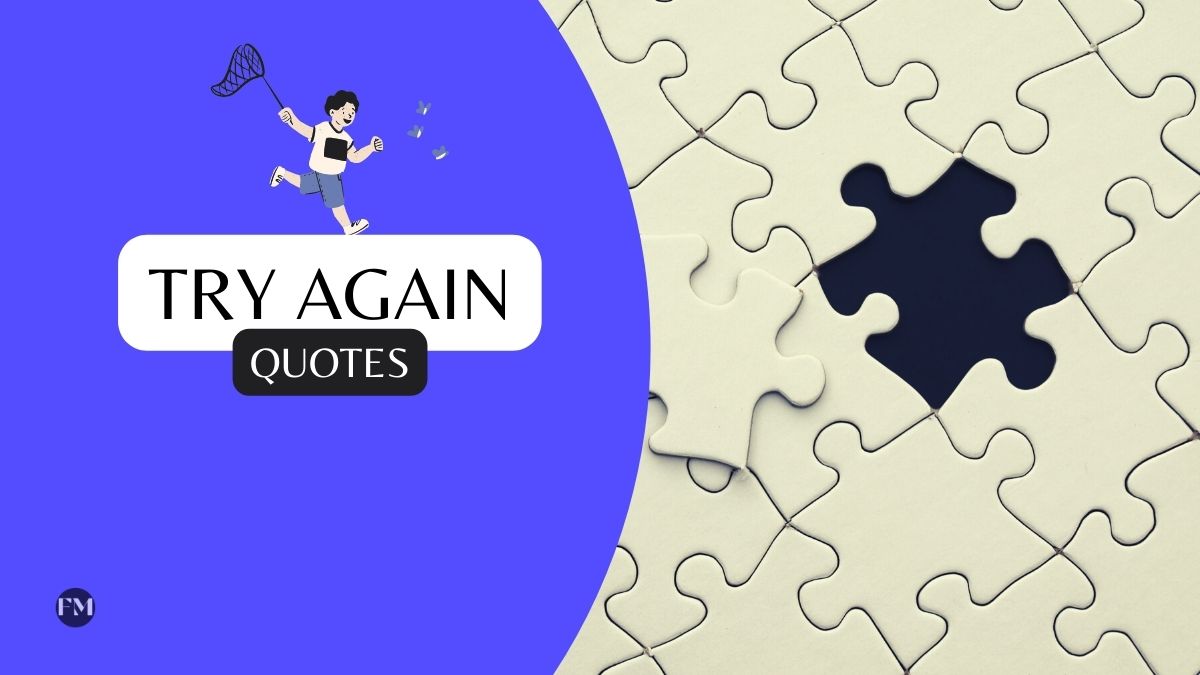 Questions and answers on trying again

What is the meaning of trying again?

The meaning of trying again is to making efforts more than once to achieve something. When you try again, it becomes easier for you to reach your target.

Why is it important to try again and again?

What can you gain by trying again and again?

When you try again and again, you get a lot of benefits. Such as if you failed, then you get another chance to find out what mistakes you did, because of which you did not succeed. You get to know the reason for your failure, and you have to be careful not to repeat it. Your mistakes in life can teach you a lot that your success will not teach you. That’s why mistake is called the biggest teacher of life. Those who try again have a lot of patience and at the same time their self-confidence is not lacking. When you fail and try again, then understand that you have all these qualities. All these achievements are no less valuable than any success.

2. “At the very moment when people underestimate you is when you can make a breakthrough.” ― Germany Kent

3. “Let them ridicule you, laugh at you, hurt you & ignore you but never let them stop you.” ― Apoorve Dubey

4. “Regrets and mistakes help us identify areas of growth. They are not meant to be dwelled on. Do not let them undermine your potential.” ― Naide P Obiang

5. “Enjoy the journey and try to get better every day. And don’t lose the passion and the love for what you do.” ― Nadia Comaneci

6. “We may encounter many defeats but we must not be defeated.” ― Maya Angelou

8. “If you get a second chance, grab it with the first and second hands. Never let it go till all is done and done well. Second chances come with the last graces!” ― Israelmore Ayivor

9. “When life gives you a passport dream, order for a reprint. Try again till you have the bigger image. Be passionate you become the real you!” ― Israelmore Ayivor

10. “You never know the plan. You never know what’s going to happen. We are not even promised tomorrow. I just try to focus on one day at a time.” ― Morgan Wallen

11. “Success is achieved and maintained by those who try and keep trying.” ― W. Clement Stone

14. “Before you doubt yourself, do something, Before you quit, try again, Before you leave, get back in.” ― Michael Bassey Johnson

15. “The path to success is usually paved with the bricks of failure.” ― Molly M. Cantrell-Kraig

18. “The minutes you waste complaining after failing aren’t going to get the job done. Quit complaining and try again!” ― Israelmore Ayivor

19. “Almost everything a leader fails to achieve is anything he fails to try. What is not attempted is what is difficult to do.” ― Israelmore Ayivor

20. “Failure is your inability to recognize that you have made the same mistakes again. Making a mistake is normal; it turns abnormal when it’s not recognized!” ― Israelmore Ayivor

21. “All you need is a little hope in order cope in times of failure, and be able to try again with a better intelligence for excellence!” ― Israelmore Ayivor

22. “When nothing goes my way, when all attempts fail, when the darkest clouds in the sky seem bent on hovering over me while everyone with whom I come into contact flashes a nasty scowl, I find some comfort in the thought of a fresh tomorrow. I am thankful for the opportunity to try again.” ― Richelle E. Goodrich

23. “Our greatest weakness lies in giving up. The most certain way to succeed is always to try just one more time.” ― Thomas A. Edison

24. “If you fail at an attempt, open your eyes to alternate approaches. If you defend your failure, you lose sight of new approaches.” ― Israelmore Ayivor

25. “Happiness is achieved when you stop waiting for your life to begin and start making the most of the moment you are in.” ― Germany Kent

26. “Mistakes help to sharpen your next steps. They don’t prove that you shouldn’t try again.” ― Gina Greenlee

27. “Never be afraid to try. The only angle through which you can approach success is by the “try-angle”. You may fail if you try, but shame unto you if you don’t try at all. If you fail…rise up and try again and again!” ― Israelmore Ayivor

28. “You have no reason to give up if you haven’t tried all steps in the world yet! Try again if at first, you don’t succeed; Try no other option; Just try again with a better approach!” ― Israelmore Ayivor

29. “The harder you try, the better the impression you set on the people around you.” ― Tom Holland

30. “If you never try, you’ll never know what you are capable of.” ― John Barrow

32. “You will never know how much you can accomplish until you try. Never stop trying. Your miracle will come in undefined moments.” ― Lailah GiftyAkita

33. “The successful man will profit from his mistakes and try again in a different way.” ― Dale Carnegie

Try again and again until you succeed

34. “You may be the only person left who believes in you, but it’s enough. It takes just one star to pierce a universe of darkness. Never give up.” ― Richelle E. Goodrich

35. “Try again; you have millions of alternatives. Fill yourself with the bullets of hope and you will kill failure with one shot.” ― Israelmore Ayivor

36. “Your downfall is a preparation for your up-rise. If you don’t know this secret, you will remain on the floor, blaming your legs instead of your head!” ― Israelmore Ayivor

37. “Failure of your first attempt does not mean you can’t be a winner of great battles; it rather means, you must trigger only when your target is in focus.” ― Israelmore Ayivor

38. “If you lose today, try tomorrow, if you lose tomorrow, try one more time, try again and again till you win because that is the only way to win big in your life.” ― Anuj Jasani

39. “There is nothing impossible to him who will try.” ― Alexander the Great

I hope you liked the above Inspirational Try Again Quotes. You may also like the motivational articles mentioned below:

28 Uncertainty Quotes to prepare yourself for any kind of situation

64 Best Inspirational Brother Quotes to feel the bond of affection