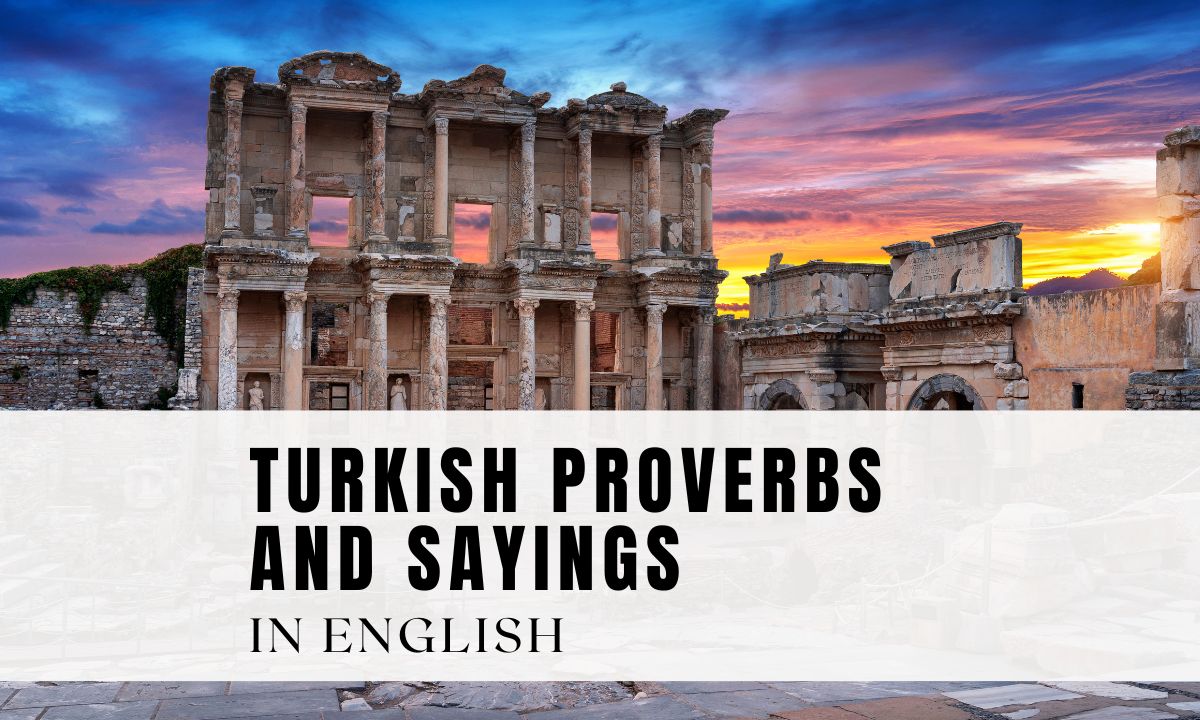 Turkish proverbs, also known as “atasözleri,” are a rich part of Turkish culture and tradition. These sayings are passed down from generation to generation and are often used to convey wisdom and moral lessons. Many Turkish proverbs have their roots in ancient folklore and mythology, and they often contain elements of humor and wit. Some popular Turkish proverbs include “Bir damla bal, bin damla derman” which means “One drop of honey is worth a thousand drops of medicine,” and “Köprüden geçme, sudan geçme” which means “Cross the bridge when you come to it, cross the river when you reach it.” These proverbs offer a unique insight into the values and beliefs of the Turkish people and continue to be widely used in modern-day conversation. Let’s read some Turkish proverbs in English.

Turkish Proverbs And Sayings in English

1. A calf of little worth is better than an ox in which you have only a share.

2. A camel might go to Mecca forty times, but that doesn’t make him a pilgrim.

3. A clever thief surprises the master of the house.

6. A diamond, though men throw it in the mud, is still a diamond.

7. A fish only comes to its senses after it is caught in the net.

8. A fool dreams of wealth; a wise man, of happiness.

9. A full pistol scares one person, and an empty one scares forty people.

10. A heart in love with beauty never grows old.

11. A hungry dog will bring a lion down.

12. A madman drops a stone in a well, but forty wise men cannot take it out.

13. A man believes that he has been born, he does not believe that he will die.

14. A neighbor that is near is better than a relative of no benefit.

16. A shepherd that is free from debt is better than a penniless prince.

17. A shop is not opened for the sake of one customer.

18. A single bad experience is worth a thousand threats.

19. A sweet tongue deceives many folks.

23. A wise man remembers his friends at all times; a fool, only when he has need of them.

26. An open enemy is preferable to a hidden friend.

27. Be afraid of a stupid friend, not of a smart enemy.

28. Beauty passes, but perfection remains with us.

29. Before you love, learn to run through snow without leaving footprints.

30. Beware of an enemy, even though he is only an ant.

32. Do not leave to the morning the business of the evening.

34. Don’t tell your secret to your friend, he will tell it to his friend.

35. Even if the whole world conspired against you – that would not inflict a quarter of the harm you inflict yourself.

36. Even if you know a thousand things, still consult him who knows something.

37. Everybody beats the donkey that has no owner.

38. Everyone admires his own character.

39. Everything is best when new, a friend and wine are best when old.

40. Everything is worn out with usage – except for experience.

41. For finding happiness one must walk till he is wearied.

42. Gold that is lent goes away laughing and comes back in tears.

45. He that conceals his grief finds no remedy for it.

46. He that falls by himself never cries.

47. He who asks for alms blushes once; he who refuses, twice.

48. He who bears trouble patiently receives his reward.

49. He who desires tranquility must be deaf, blind, and tongueless.

50. He who fears danger in time seldom feels it.

51. He who has no food has no authority.

52. He who keeps his head at home loses not his hat in the crowd.

53. He who marries early makes no mistake.

54. He who pays no heed to the words of his elders mounts a wild horse.

55. He who saves the ship is the captain.

56. Hunger makes the wolf come out of the forest.

58. If one is far away, one also gets far from the heart.

59. If you do not know what to say, say what your elders said.

60. If you look for a faultless woman, you will remain a bachelor.

61. In an office of trust, there must be no treachery.

62. In every business be steadfast.

64. In the company of the blind close your eyes.

65. Keep the tongue in your mouth a prisoner.

Turkish Proverbs And Idioms For Life

67. Look at the mother before marrying the daughter.

68. Love and a king accept no partnership.

70. Measure a thousand times and cut once.

71. Never do business with a relative.

72. No matter how far you have gone on the wrong road, turn back.

73. Not he who lived long knows, but he who traveled much knows.

74. Not knowing is not shameful, not asking is.

75. One guest loves not another guest; the master of the house dislikes both.

76. One hour of justice is worth seventy hours of prayer.

77. One must fill the pitcher while the water is flowing.

78. One night with an ugly woman and one day in the mountains both are like an eternity.

80. Patience is bitter, but its fruit is sweet.

81. People who make the most or the loudest threats are the least likely to take action.

83. The bride who brings a golden throne will sit on it herself.

84. The death of another does not save us.

86. The dog that barks much does not bite.

87. The dog that is going to bite does not show its teeth.

88. The fool continues procrastinating, the wise man waits for a fit occasion.

89. The fool sings a love song to his wife, the wise man will talk about his dog.

90. The foot of a lamp is always the least lit.

91. The fox comes forth from a hole you would not have expected.

92. The fruit of a tree falls near its roots.

93. The hand that gives is above that which receives.

95. The horse ambles according to his master.

96. The iron that works does not rust.

97. The jeweler knows the value of jewels.

98. The lover who suffers not anguish knows not the worth of pleasure.

99. The man who tells the truth is driven out of nine villages.

100. The master of the house is the servant of his guest.

101. The most difficult master is the servant who became the master.

104. The place of your birth is less important than how you live.

106. The sheep separated from the flock is eaten by the wolf.

108. The stairs are mounted step by step.

109. The testimony of the heart is stronger than a hundred witnesses.

112. The wise man says what he knows; the fool doesn’t know what he is saying.

113. There is no axe that cannot penetrate a tree.

115. There isn’t a sword that would cut off a golden hand.

116. They put up minds for sale on the market, everyone liked his own mind.

119. To believe a business is impossible is the way to make it so.

122. Two captains will sink the ship.

125. What a man suffers is the punishment of his tongue

126. What flares up fast, extinguishes soon.

127. When an opportunity is in your hand do not allow it to pass.

128. When God wants to please a poor man, He lets him lose his donkey and then helps him find it again.

129. When the carriage has been smashed, they who show the road are many.

130. When the flock makes an about-face, the stragglers become leaders.

131. When violence comes into the house, law and justice leave through the chimney.

132. Who gossips to you, will gossip about you.

133. Who has power in his hands, has no need to lie; he uses violence.

136. Your five-year-old son is your instructor; at ten your slave; at fifteen your equal and after that either friend or foe.

Image by tawatchai07 on Freepik

The 7 C’s of Communication To Achieve Connection and Clarity