How Many Types of Sentences Are There? [With Examples] 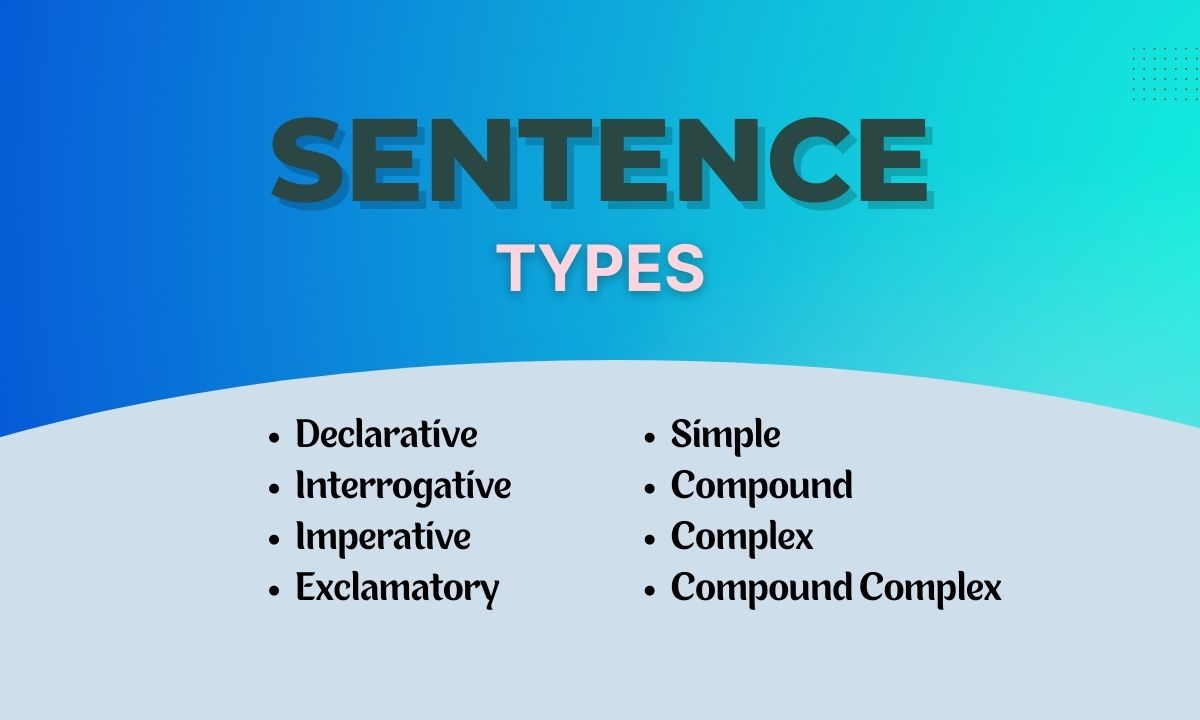 Here in this post, we going to learn about the various types of sentences with their definition and examples.

As you know, a sentence is a group of words that have a complete meaning. The first letter of the word at the beginning of the sentence is always capitalized and a punctuation mark (full stop, question mark, exclamatory mark) comes at the end of the sentence.

This sentence has been divided into different parts as per its structure and uses in day-to-day life.

Also read: What is a sentence?

Sentences are divided into 4 types according to their usage in daily life. These are declarative, interrogative, imperative, and exclamatory.

Some examples of declarative sentences:

I am a student.

The earth is called a blue planet.

I am your teacher.

You are my student.

A sentence that shows a question is called an interrogative sentence. It usually begins with who, why, how, what, when, where, and what and ends with a question mark (?).

What is your name?

Will you come with me?

The sentences which are used to make a request, issue a command, give an instruction, or offer advice are called imperative sentences. These sentences are sometimes referred to as directions because they provide direction to whoever is being addressed.

Give respect to your parents. (advice)

Give me a glass of water, please! (request)

An imperative sentence usually ends with a period (full stop) but can occasionally end with an exclamation point (!).

Give me a glass of water, please!

An exclamation mark is used at the end of the sentence.

Give respect to your parents.

A full stop is used at the end of the sentence.

What a beautiful photograph!

How beautiful you are!

What a nice car you have!

We won the game!

What a movie it was!

There are also 4 types per sentence composition. These are simple, compound, complex, and compound-complex.

I am a shopkeeper.

Here “I” is a subject, and “am” is a verb. The sentence gives a complete meaning.

Some more examples are mentioned below:

I saw a horror movie yesterday.

Children are playing in the garden.

We went to a party last night.

I am writing. My brother is eating.

These two sentences are two independent clauses or you can say both are two simple sentences. If you combine them, the new sentence will be:

I am writing, and my brother is eating.

Here both sentences are combined with the coordinating conjunction “and” and a comma placed before it.

The compound sentence is also can be combined with a semi-colon (;).

I am writing; my brother is eating.

To understand better, here are some examples of compound sentences.

You can take the bus or you can stop here.

There is no one here, but we can go ahead and start without them.

I’m in a lot of trouble; I hope you will help me.

While I was leaving, an accident happened.

My pen ran out of ink when I was writing yesterday, but I had a new pen.

There are some sentences that are just one word but it has full meaning.

(When you call a boy named Ram.)

(It is a lonely word, but it expresses surprise.)

What is a Sentence? Definition & Types of Sentence