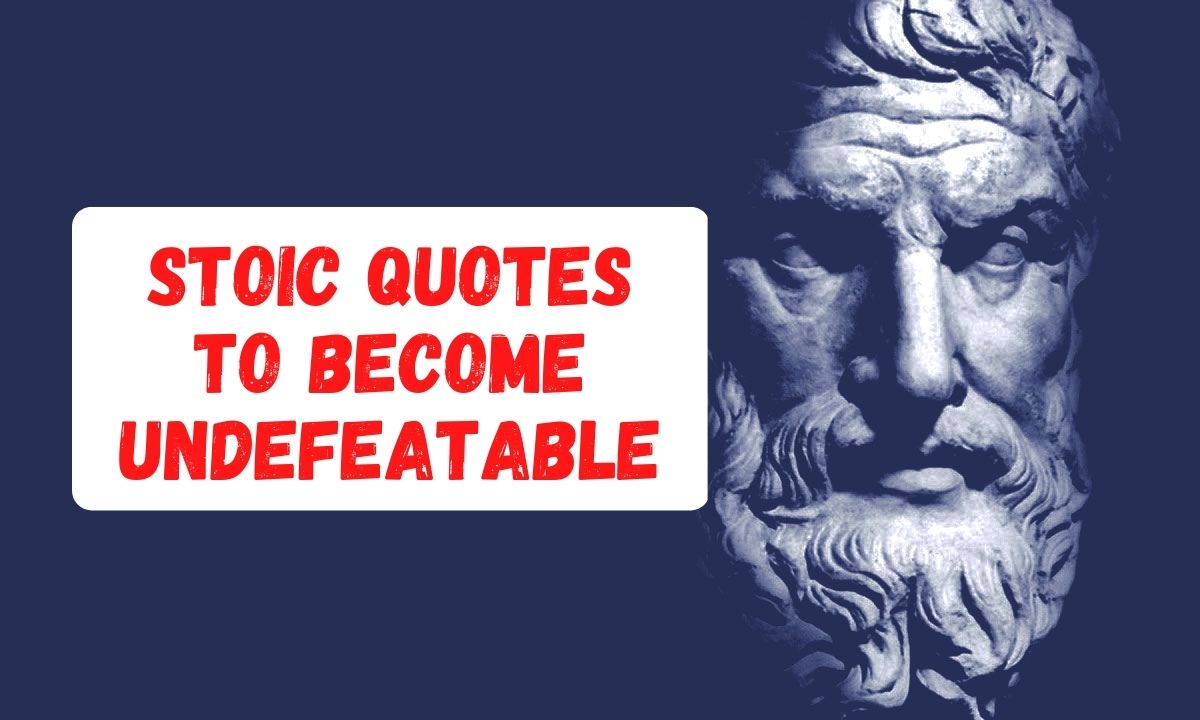 Stoic Quotes are a collection of philosophical insights and wisdom from ancient Greek and Roman philosophers who practiced Stoicism. This philosophy focuses on living a virtuous and contented life and emphasizes the importance of reason, self-control, and accepting the things that we cannot change. The Stoics believed that we should strive to live in harmony with nature and embrace the present moment, rather than dwelling on the past or worrying about the future. These quotes provide a timeless source of inspiration and guidance for those seeking to live a more fulfilling and meaningful life.

Stoicism is a philosophy that originated in ancient Greece and was founded by Zeno of Citium in the 3rd century BCE. It teaches that the key to living a good life is to focus on what one can control and to accept what one cannot control. The goal of Stoicism is to live in a way that is rational, virtuous, and in accordance with nature. It emphasizes the importance of self-control, rational thought, and the ability to live in the present moment. Stoicism also teaches that the universe is governed by reason and that suffering and negative emotions are caused by our own negative thoughts and reactions to events.

What is the Stoic mindset?

Stoic mindset is a philosophical approach to life that emphasizes living in accordance with reason and virtue, and accepting whatever happens as inevitable and outside of one’s control. It involves focusing on what one can control, such as one’s thoughts, actions, and attitudes, rather than worrying about external circumstances or events. The Stoic mindset also emphasizes the importance of cultivating inner peace and emotional resilience and living a life of integrity, humility, and compassion.

Who are the Stoic philosophers?

Find here the ultimate collection of Stoic quotes from stoic philosophers to become undefeatable by developing your self-control.

You can also read other inspirational posts such as life-changing poems for hard times, the greatest motivational thoughts from history, and quotes to inspire courage.

1. “Everything we hear is an opinion, not a fact. Everything we see is a perspective, not the truth.” ― Marcus Aurelius

2. “The first rule is to keep an untroubled spirit. The second is to look things in the face and know them for what they are.” ― Marcus Aurelius

3. “Inwardly, we ought to be different in all respects, but our exterior should conform to society.” ― Seneca

4. “Any person capable of angering you becomes your master; he can anger you only when you permit yourself to be disturbed by him.” ― Epictetus

5. “If you really want to escape the things that harass you, what you’re needing is not to be in a different place but to be a different person.” ― Seneca

6. “When you arise in the morning, think of what a precious privilege it is to be alive-to breathe, to think, to enjoy, and to love.” ― Marcus Aurelius

7. “You have power over your mind – not outside events. Realize this, and you will find strength.” ― Marcus Aurelius

8. “He suffers more than necessary, who suffers before it is necessary.” ― Seneca

9. “Be like the cliff against which the waves continually break, but it stands firm and tames the fury of the water around it.” ― Marcus Aurelius

10. “Nature hath given men one tongue but two ears, that we may hear from others twice as much as we speak.” ― Epictetus

11. “People are frugal in guarding their personal property, but as soon as it comes to squandering time they are most wasteful of the one thing in which it is right to be stingy.” ― Seneca

12. “Begin at once to live, and count each separate day as a separate life.” ― Seneca

13. “It’s time you realized that you have something in you more powerful and miraculous than the things that affect you and make you dance like a puppet. What’s in my thoughts at this moment? Fear? Jealousy? Desire? Feelings like that?” ― Marcus Aurelius

14. “Until we have begun to go without them, we fail to realize how unnecessary many things are. We’ve been using them not because we needed them but because we had them.” ― Seneca

16. “It never ceases to amaze me: we all love ourselves more than other people but care more about their opinion than our own.” ― Marcus Aurelius

17. “The more we value things outside our control, the less control we have.” ― Epictetus

18. “Here is a rule to remember in future, when anything tempts you to feel bitter: not “This is a misfortune,” but “To bear this worthily is good fortune.” ― Marcus Aurelius

19. “Man conquers the world by conquering himself.” ― Zeno of Citium

20. “Waste no more time arguing about what a good man should be. Be one.” ― Marcus Aurelius

21. “The things you think about determine the quality of your mind. Your soul takes on the color of your thoughts.” ― Marcus Aurelius

23. “It’s not what happens to you, but how you react to it that matters.” ― Epictetus

24. “Luck is what happens when preparation meets opportunity.” ― Seneca

26. “Knowing yourself is the beginning of all wisdom.” ― Aristotle

27. “Difficulty shows what men are. Therefore when a difficulty falls upon you, remember that God, like a trainer of wrestlers, has matched you with a rough young man. Why? So that you may become an Olympic conqueror, but it is not accomplished without sweat.” ― Epictetus

30. “It is not death that a man should fear, but he should fear never beginning to live.” ― Marcus Aurelius

31. “Nothing endures but change” ― Heraclitus

32. “A person’s worth is measured by the worth of what he values.” ― Marcus Aurelius

33. “If you want to improve, be content to be thought foolish and stupid with regard to external things. Don’t wish to be thought to know anything; and even if you appear to be somebody important to others, distrust yourself. For, it is difficult to both keep your faculty of choice in a state conformable to nature and at the same time acquire external things. But while you are careful about the one, you must of necessity neglect the other” ― Epictetus

34. “Anger, if not restrained, is frequently more hurtful to us than the injury that provokes it.” ― Seneca

37. “Reject your sense of injury and the injury itself disappears.” ― Marcus Aurelius

38. “The willing is led by fate, the reluctant are dragged.” ― Cleanthes of Assos

39. “What we do now echoes in eternity.” ― Marcus Aurelius

41. “Let us prepare our minds as if we’d come to the very end of life. Let us postpone nothing. Let us balance life’s books each day. … The one who puts the finishing touches on their life each day is never short of time.” ― Seneca

42. “Your days are numbered. Use them to throw open the windows of your soul to the sun. If you do not, the sun will soon set, and you with it.” ― Marcus Aurelius

43. “Wealth consists not in having great possessions, but in having few wants.” ― Epictetus

44. “Keep silence for the most part, and speak only when you must, and then briefly.” ― Epictetus

45. “All cruelty springs from weakness.” ― Seneca

46. “It is a rough road that leads to the heights of greatness.” ― Seneca

50. “Because a thing seems difficult for you, do not think it impossible for anyone to accomplish.” ― Marcus Aurelius

51. “Freedom is secured not by the fulfilling of men’s desires, but by the removal of desire.” ― Epictetus

52. “Circumstances don’t make the man, they only reveal him to himself.” ― Epictetus

53. “The key is to keep company only with people who uplift you, whose presence calls forth your best.” ― Epictetus

54. “Humans have come into being for the sake of each other, so either teach them or learn to bear them.” ― Marcus Aurelius

55. “It can ruin your life only if it ruins your character. Otherwise, it cannot harm you—inside or out.” ― Marcus Aurelius

56. “The happiness of your life depends upon the quality of your thoughts: therefore, guard accordingly, and take care that you entertain no notions unsuitable to virtue and reasonable nature.” ― Marcus Aurelius

57. “Mastery of reading and writing requires a master.” — Marcus Aurelius

58. “Life is very short and anxious for those who forget the past, neglect the present, and fear the future.” ― Seneca

59. “Be tolerant with others and strict with yourself.” ― Marcus Aurelius

60. “Never let the future disturb you. You will meet it, if you have to, with the same weapons of reason which today arm you against the present.” ― Marcus Aurelius

62. “Enjoy present pleasures in such a way as not to injure future ones.” ― Seneca

63. “Withdraw into yourself, as far as you can. Associate with those who will make a better man of you. Welcome those whom you yourself can improve. The process is mutual; for men learn while they teach.” ― Seneca

65. “Nothing is burdensome if taken lightly, and nothing need arouse one’s irritation so long as one doesn’t make it bigger than it is by getting irritated.” ― Seneca

66. “To win true freedom you must be a slave to philosophy.” ― Seneca

67. “There is no enjoying the possession of anything valuable unless one has someone to share it with” ― Seneca

68. “For many men, the acquisition of wealth does not end their troubles, it only changes them” ― Seneca

69. “An ignorant person is inclined to blame others for his own misfortune. To blame oneself is proof of progress. But the wise man never has to blame another or himself.” ― Epictetus

70. “The difficulty comes from our lack of confidence.” ― Seneca

71. “What really ruins our character is the fact that none of us looks back over his life.” ― Lucius Annaeus Seneca

72. “Let us say what we feel, and feel what we say; let speech harmonize with life.” ― Seneca

73. “People who know no self-restraint lead stormy and disordered lives, passing their time in a state of fear commensurate with the injuries they do to others, never able to relax.” ― Seneca

75. “Words need to be sown like seeds. No matter how tiny a seed may be when in lands in the right sort of ground it unfolds its strength and from being minute expands and grows to a massive size.” ― Seneca