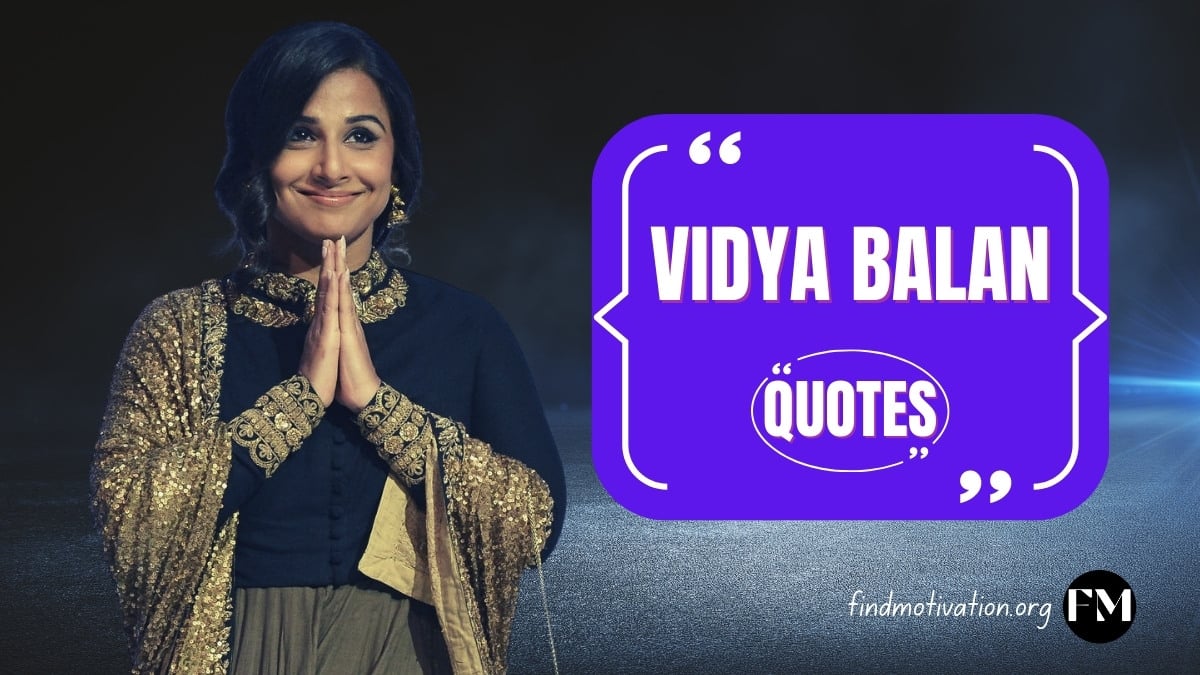 Vidya Balan is mostly known for her work in female-oriented films to transform the portrayal of women. Read here Inspiring Quotes from Vidya Balan that will help you to never give up in your life.

Vidya Balan was born on 1 January 1979 in Mumbai. Her father P. R. Balan is the Executive Vice President of Digicable and her mother Saraswathy Balan is a housewife. Vidya did her schooling at St. Anthony Girls’ High School, Mumbai.

At a young age, Inspired by the work of actors Shabana Azmi and Madhuri Dixit, Vidya aspired to make a career in film. At the age of 16, Vidya started acting in Ekta Kapoor’s TV serial Hum Paanch. By the end of the serial, she got a chance to work in another serial of Anurag Basu. Vidya declined the offer as she wanted to focus on her film career.

Her parents supported the decision but encouraged her to complete her education first. Following the parents’ advice, she attended St. Xavier’s College to pursue a bachelor’s degree in sociology and later earned a master’s degree from the University of Mumbai.

She shifted her focus from Malayalam cinema to Tamil cinema. In 2001, she was signed in N. Linguswamy’s film Run. But after completing the first shooting schedule, she was unceremoniously dropped and was replaced by Meera Jasmine. Vidya was signed under false pretenses for a sex comedy, but she did not feel comfortable and left the project. Thereafter, she signed for the third Tamil film, Manasellam (2003), but was replaced by Trisha as the director was dissatisfied with her work. Then she worked for a Malayalam film called Kalari Vikraman in 2003, but the film failed to release.

Even after failing to start a film career, she did not give up. She made several appearances in about 60 television commercials. In 2003, Vidya got a chance to work in a Bengali film Bhalo Theko. She was selected for Best Actress for her strong performance in that film and was awarded the Anandalok Award.

From here things started getting easier for Vidya. On Pradeep Sarkar’s recommendation, Vidya auditioned for the lead role in the Hindi film Parineeta. The film’s producer Vidhu Vinod Chopra initially wanted to cast an established actress in the film but agreed to cast Vidya after six months of trials. The film Parineeta became a superhit and Vidya’s performance received praise from critics. She received the Filmfare Award for Best Female Debut. After this, Vidya started showing her acting skill. She appeared in many super hit films like Parineeta, Lage Raho Munna Bhai, Bhool Bhulaiyaa, Paa, Kahaani, The Dirty Picture, Tumhari Sulu, Mission Mangal, and Shakuntala Devi.

She has received the National Film Award for the film The Dirty Picture. In 2014, she was honored by the Government of India with India’s fourth-highest civilian award, Padma Shri. Apart from this Vidya has won many awards. She has achieved superstardom for herself on the basis of her acting. Vidya also promotes humanitarian causes and supports the empowerment of women.

1. “Life has been kind to me. I am happy with the love and appreciation that I have been getting throughout my career. I feel blessed.” ― Vidya Balan

2. “I’m someone who believes in ‘live and let live,’ and that applies to everything.” ― Vidya Balan

3. “I enjoy the sari. I think it’s the sexiest garment ever.” ― Vidya Balan

6. “As women, we are constantly criticizing and judging ourselves in terms of our body, how we dress, what profession we take up, how we fare in that.” ― Vidya Balan

7. “Indian women are gifted with certain body types and features, which is healthy, and we should accept that.” ― Vidya Balan

8. “Women are blessed with energy – a power that is unique.” ― Vidya Balan

9. “I have been very fortunate to have played strong women and explored their strengths through my films.” ― Vidya Balan

Thoughts on Being Traditional

10. “Being traditional is a choice for me.” ― Vidya Balan

11. “South Indian families bring up their children with a sense of freedom, self-respect, and self-value.” ― Vidya Balan

12. “We do whatever we have to with earnestness and honesty, including being uninhibited. Yet we hold onto our roots.” ― Vidya Balan

13. “Marriage is something I’d recommend everyone to try, if you find the right person, of course.” ― Vidya Balan

14. “I don’t think my competition is with the heroes. I don’t think I’m competing with anyone.” ― Vidya Balan

15. “When I stopped competing with anything is when I started enjoying my work, and that brought out the best in me.” ― Vidya Balan

16. “I’m living in a universe of my own, and I’m enjoying that. I love to appreciate other people’s work.” ― Vidya Balan

17. “I think the beautiful thing about the past is that it leads you to the present.” ― Vidya Balan

18. “I’m not fashionable, and I know nothing about fashion, but I have my individual style, and style is eternal.” ― Vidya Balan

19. “I started feeling secure in every way once I began to accept myself the way I was.” ― Vidya Balan

20. “I don’t bother about how people feel about me. What matters to me is how I feel about them.” ― Vidya Balan

22. “All over the world, people are looking at India and saying ‘wow’, and that’s because we have begun to say ‘wow’ ourselves.” ― Vidya Balan

23. “From Shakespeare to Robi Thakur, everyone has written stories about people and incidents around them. There is no creativity minus reality irrespective of how flowery or abstract you make it.” ― Vidya Balan

2. “The heart of a father is not always tough, it is often helpless.” (Bobby Jasoos)

3. “Pray to whatever god you want … just pray to the power, not the picture.” (Mission Mangal)

4. “When life is given only once… then why think twice.” (The Dirty Picture)

5. “Every human dream. But if there are hiccups in the dream, then the dream breaks.” (Paa)

6. “The bigger the amount is … the higher the risk will be.” (Ishqiya)

7. “Some people make their name from their work … I have spoilt mine with my work.” (The Dirty Picture)

Final Words: I hope you liked the above Vidya Balan Quotes. Don’t forget to mention the best line that you liked most from the above lines in the comment box below.

31 Anushka Sharma Quotes to help you to lead your life

16 Shraddha Kapoor Quotes to create a separate identity for yourself