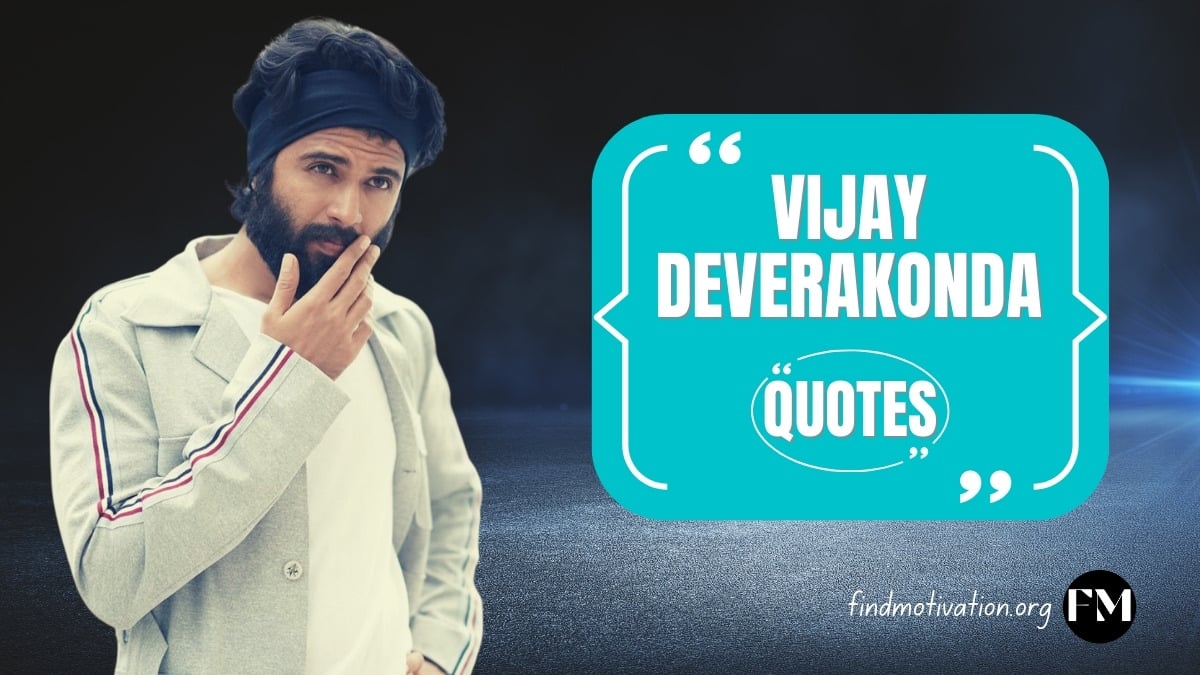 Read here the Inspiring quotes said by Vijay Deverakonda to find motivation in your life.

Who is Vijay Deverakonda?

Deverakonda Vijay Sai is popularly known as Vijay Deverakonda. He is an Indian actor who works in Telugu language films. Vijay has established himself as a leading actor in Telugu cinema by starring in lead roles in many super hit films. He was the most searched South Indian actor in 2019.

How was Vijay Deverakonda’s life journey?

Vijay Deverakonda was born on 9 May 1989 in Achampet of Telangana, India. His father Govardhan Rao is a small television serial director, and his mother Madhavi is a soft skills tutor.

Vijay made his film debut in the Nuvvila film in 2011. He gained recognition for his supporting role in Yevade Subramanyam in 2015. Vijay got his first lead role in the film Pelli Choopulu. The film became commercially successful and won many awards at the 64th National Film Awards. Vijay has established himself as a leading actor of Telugu cinema by starring in lead roles in films such as Arjun Reddy, Mahanati, Geetha Govindam, Taxiwaala, Dear Comrade, World Famous Lover. His performance in Arjun Reddy won him several awards including the Filmfare Award for Best Actor. His performance in Arjun Reddy was ranked by Film Companion “100 Greatest Performances of the Decade ”.

What has Vijay Deverakonda achieved in his life?

Vijay’s portrayal as a self-destructive, short-tempered, and alcoholic surgeon received critical acclaim. He received many film awards for his performances. He was featured by Forbes India in their 30 Under 30 list of 2019. According to Google’s annual report, he was the most searched South Indian actor in 2019.

Vijay Deverakonda has donated relief funds. He has founded The Deverakonda Foundation to help people. The foundation has aided 17,000 middle-class families with their groceries and essentials during the COVID-19 pandemic.

1. “Exploring the dark side of my characters’ personalities is my forte.” ― Vijay Deverakonda

2. “Cricket, politics, and cinema are what a majority in our country are most passionate about. They have the power to divide the best of friends depending on which side you are on.” ― Vijay Deverakonda

3. “No two people react to things the same way, and even the same person reacts differently at a different time.” ― Vijay Deverakonda

4. “I am averse to incompetency. I need mentally stimulating people and intelligent conversations.” ― Vijay Deverakonda

6. “I was always motivated to make my parents proud and wait for that one opportunity.” ― Vijay Deverakonda

7. “I feel very awkward about receiving attention for the wrong reasons.” ― Vijay Deverakonda

8. “Once you become an actor, you have to say goodbye to your personal life.” ― Vijay Deverakonda

9. “An actor’s life is abnormal! It feels like I’m being watched all the time, whether I’m at a restaurant, gym, or anywhere. I sometimes feel I don’t want to be looked at.” ― Vijay Deverakonda

11. “There are a lot of grey areas in my personality. We all have them.” ― Vijay Deverakonda

15. “I come from a place where getting a call to do a film is a big thing. I would work double hard to better a partly convincing film than be without work.” ― Vijay Deverakonda

16. “A learning experience is the best way, to sum up, my first film credit. It’s hard to break into the film industry, and it was a minor role but still, my only shot at the movies while I was doing theater.” ― Vijay Deverakonda

17. “I guess you cannot prepare yourself enough for stardom, even though you strive for it all your life.” ― Vijay Deverakonda

18. “I am comfortable with doing mistakes. It’s a normal thing.” ― Vijay Deverakonda

19. “If a mistake happens because of my own decision, I am OK with it.” ― Vijay Deverakonda

Final Words: I hope you liked the above Vijay Deverakonda Quotes. Don’t forget to mention the best line that you liked most from the above lines in the comment box below.

39 Kamal Haasan Quotes That will make you strong