56 Top Inspirational Hero Quotes to be a role model 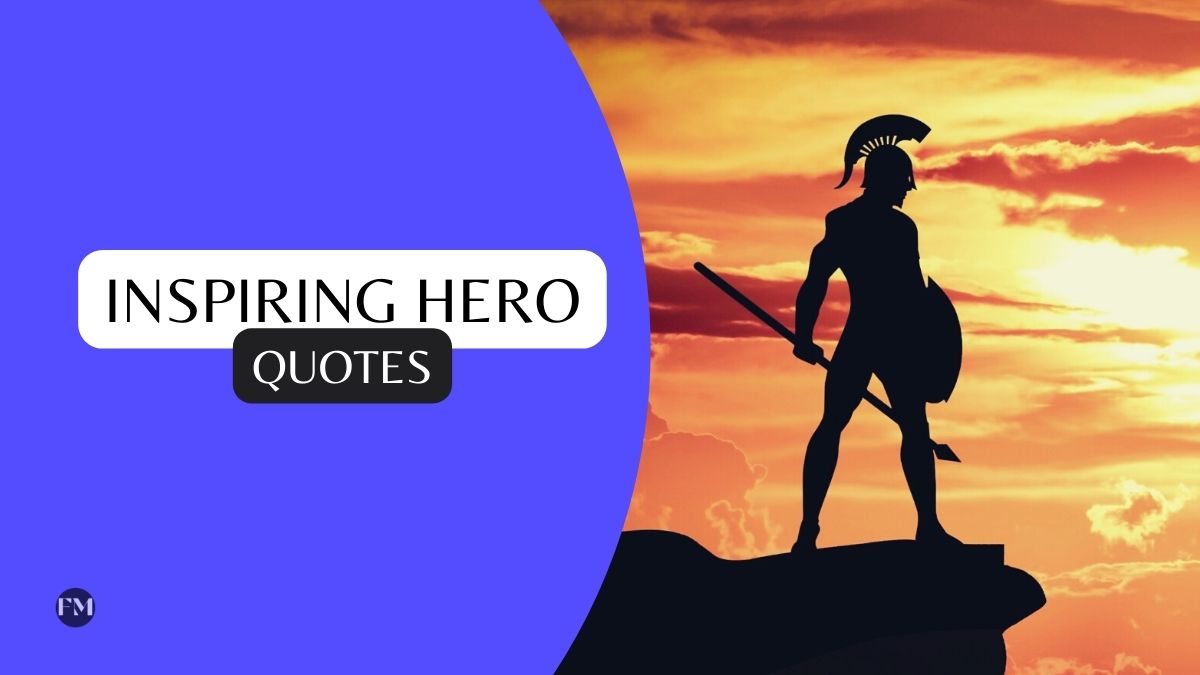 A hero is a person who has great qualities like courage, the ability to face danger, the ability to conquer fear, etc. Everyone considers him/her a role model. He/she has the heroic personality to influence people. Here are some inspirational hero quotes that will help you to choose someone who can inspire you to do something good in your life.

Who is a hero?

A hero is a person who faces the difficulties of life with courage and fearless attitude. He/she also helps people in difficult times. They never step back, they fight with the life challenges, defeat them, and move forward. If someone is in trouble, they never ignore them, and always help others.

What are the qualities of a hero?

The hero has many qualities, with the help of which he/she becomes a role model among the people. The qualities are

Who can be a hero?

Who is the real-life hero?

A real-life hero is one who faces all the challenges in his life as well as helps the people around him to face their life challenges. They have goals in their lives, and they achieve those goals.

What is the definition of a hero?

According to Merriam Webster, the hero is

According to Dictionary.com, the hero is

According to the Britannica dictionary, a hero is

According to the Cambridge dictionary, a hero is

According to American Dictionary, a hero is

According to Yourdictionary, a hero is

1. “Every story needs its hero. And its villain. And it’s monster.” ― Amie Kaufman

2. “The only difference between a hero and the villain is that the villain chooses to use that power in a way that is selfish and hurts other people.” ― Chadwick Boseman

3. “There’s no hero without a villain.” ― Mark Pellegrino

4. “Every villain is a hero in his own mind.” ― Tom Hiddleston

6. “The souls of heroes are forged by the gods and tempered with the pain of life.” ― Brian Rathbone

7. “The heart of the hero is love to serve humanity.” ― Lailah Gifty Akita

8. “Everybody wants to be a hero. But most of us are just misunderstood villains” ― Mahogany L. Browne

9. “A hero is the product of his own decisions.” ― Claudia Fenske

10. “Heroes make us smile because they not only rescue us outwardly but inwardly too.” ― Richelle E. Goodrich

11. “When you are pursuing your dreams, they will call you CRAZY because they are LAZY. They never know you are a HERO who just jumped away from step ZERO. Stay away from negative people; they will only pollute you.” ― Israelmore Ayivor

12. “A hero is someone who has given his or her life to something bigger than oneself.” ― Joseph Campbell

13. “A hero is somebody who is selfless, who is generous in spirit, who just tries to give back as much as possible and help people. A hero to me is someone who saves people and who really deeply cares.” ― Debi Mazar

14. “Hard times don’t create heroes. It is during the hard times when the ‘hero’ within us is revealed.” ― Bob Riley

16. “The true hero is one who conquers his own anger and hatred.” ― Dalai Lama XIV

17. “A real hero doesn’t expect to be thanked or even recognized.” ― Tom Collins

20. “A hero is an ordinary individual who finds the strength to persevere and endure in spite of overwhelming obstacles.” ― Christopher Reeve

21. “A hero is someone who understands the responsibility that comes with his freedom.” ― Bob Dylan

22. “Great heroes need great sorrows and burdens, or half their greatness goes unnoticed. It is all part of the fairy tale.” ― Peter S. Beagle

24. “A hero can go anywhere, challenge anyone, as long as he has the nerve.” ― Rick Riordan

25. “Heroism doesn’t always happen in a burst of glory. Sometimes small triumphs and large hearts change the course of history. Sometimes a chicken can save a man’s life.” ― Mary Roach

26. “All of us start from zero. We take the right decision and become a hero.” ― Govinda

27. “A hero is no braver than an ordinary man, but he is brave five minutes longer.” ― Ralph Waldo Emerson

28. “Love of glory can only create a great hero; contempt of glory creates a great man.” ― Charles Maurice de Talleyrand

30. “A hero cannot be a hero unless in a heroic world.” ― Nathaniel Hawthorne

31. “Heroism is endurance for one moment more.” ― George F. Kennan

32. “A hero is someone who has given his or her life to something bigger than oneself.” ― Joseph Campbell

33. “Heroism lies in the hearts of humanity.” ― Lailah Gifty Akita

34. “It doesn’t take a hero to order men into battle. It takes a hero to be one of those men who goes into battle.” ― Norman Schwarzkopf

37. “Everyone is necessarily the hero of his own life story.” ― John Barth

38. “Amongst the qualities a hero should have, I would include determination, loyalty, courage, perseverance, patience, focus, intrepidity and selflessness.” ― Ricky Martin

Be your own hero quotes

43. “If you are not the hero of your own story, then you’re missing the whole point of your humanity.” ― Steve Maraboli

45. “When I was a boy, I always saw myself as a hero in comic books and in movies. I grew up believing this dream.” ― Elvis Presley

47. “Using your talent, hobby or profession in a way that makes you contribute with something good to this world is truly the way to go.” ― Simon Zingerman

51. “Find your own truths as best you can only remember that few are courageous enough to tell a tale of which they are not the hero.” ― Alida Van Gores

52. “A hero is somebody who voluntarily walks into the unknown.” ― Tom Hanks

53. “The hero is one who kindles a great light in the world, who sets up blazing torches in the dark streets of life for men to see by.” ― Felix Adler

54. “The idol of today pushes the hero of yesterday out of our recollection; and will, in turn, be supplanted by his successor of tomorrow.” ― Washington Irving

55. “I am not a hero but the brave men who died deserved this honor.” ― Ira Hayes

I hope you liked the above Inspirational Hero Quotes. You may also like the motivational articles mentioned below: