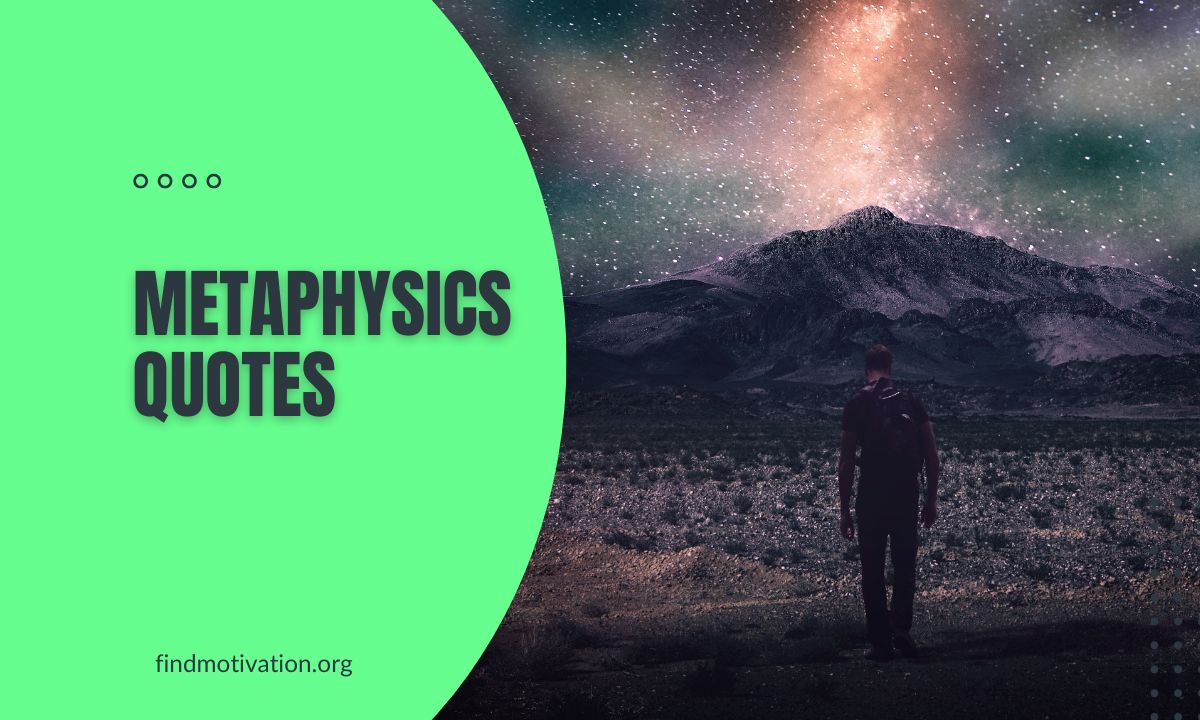 Metaphysics is the branch of philosophy that deals with the nature of reality, existence, and the universe. It is a complex and fascinating subject that has captivated philosophers and thinkers throughout history. Metaphysics quotes offer a glimpse into the minds of some of the greatest minds in history and their thoughts on the nature of existence and the universe. These quotes range from deep and profound to humorous and thought-provoking, and they offer a unique perspective on the world around us. Whether you are a student of philosophy or simply someone who is curious about the nature of reality, these quotes are sure to inspire and challenge your understanding of the world.

You can also read other quotes such as Theology Quotes and Parallel Universe Quotes.

1. “From the standpoint of daily life, however, there is one thing we do know: that we are here for the sake of each other – above all for those upon whose smile and well-being our own happiness depends, and also for the countless unknown souls with whose fate we are connected by a bond of sympathy. Many times a day I realize how much my own outer and inner life is built upon the labors of my fellow men, both living and dead, and how earnestly I must exert myself in order to give in return as much as I have received.” ― Albert Einstein

2. “I suppose therefore that all things I see are illusions; I believe that nothing has ever existed of everything my lying memory tells me. I think I have no sense. I believe that body, shape, extension, motion, and location are functions. What is there then that can be taken as true? Perhaps only this one thing, that nothing at all is certain.” ― Rene Descartes

3. “Metaphysics means nothing but an unusually obstinate effort to think clearly. The fundamental conceptions of psychology are practically very clear to us, but theoretically, they are very confused, and one easily makes the obscurest assumptions in this science without realizing, until challenged, what internal difficulties they involve.” ― William James

4. “God who gave Animals self-motion beyond our understanding is, without doubt, able to implant other principles of motion in bodies [which] we may understand as little. Some would readily grant this may be a Spiritual one; yet a mechanical one might be shown, did not I think it better to pass it by.” ― Isaac Newton

5. “Do not commit spiritual suicide through a passion for discussing metaphysical subtleties.” ― Charles H. Spurgeon

7. “A great physicist is always a meta physicist as well; he has a higher concept of his knowledge and his task.” ― Ernst Jünger

8. “I’ve often thought that there isn’t any “I” at all; that we are simply the means of expression of something else; that when we think we are ourselves, we are simply the victims of a delusion.” ― Aleister Crowley

9. “Attaining consciousness is connected with the gradual liberation from mechanicalness, for man is fully and completely under mechanical laws.” ― P.D. Ouspensky

10. “Origin of man now proved.—Metaphysics must flourish.—He who understands baboon would do more towards metaphysics than Locke.” ― Charles Darwin

11. “Many things are mechanical and should remain mechanical. But mechanical thoughts, mechanical feelings—that is what has to be studied and can and should be changed. Mechanical thinking is not worth a penny. You can think about many things mechanically, but you will get nothing from it.” ― P.D. Ouspensky

12. “It is true, there could be a metaphysical world; the absolute possibility of it is hard to be disputed. We behold all things through the human head and cannot cut off this head; while the question nonetheless remains what of the world would still be there if one had cut it off.” ― Friedrich Nietzsche

13. “As to the gods, I have no means of knowing either that they exist or do not exist. For many are the obstacles that impede knowledge, both the obscurity of the question and the shortness of human life.” ― Diogenes Laertius

14. “Metaphysical speculation is independent of the physical validity of the Big Bang itself and is irrelevant to our understanding of it.” ― Lawrence M. Krauss

15. “There are mystical, unbreakable bonds between all members of the natural world including humans and animals. Whether or not we remember or acknowledge this relatedness, it still exists.” ― Elizabeth Eiler

18. “The unity of scientific and spiritual knowledge is realized when each of the particular sciences is organically related to the supreme knowledge of al-tawhid.” ― Osman Bakar

19. “Science and Metaphysics show us part of what “is”. Logic and Epistemology help us interpret this part and understand how much of it we can really know. And finally, Ethics teaches us how to embrace this knowledge and how to cherry-pick only those things that will give us endurance and contentment in the long run, avoiding those that may keep our hearts buried in the ground; how to live well and decently and how to help the society function properly.” ― Giannis Delimitsos

20. “Everything ‘happens’. People can ‘do’ nothing. From the time we are born to the time we die things happen, happen, happen, and we think we are doing. This is our normal state in life, and even the smallest possibility to do something comes only through the work, and first only in oneself, not externally.” ― P.D. Ouspensky

21. “The accusation of metaphysics has become in philosophy something like the accusation of being a security risk in the public service. I do not for my part know what is meant by the word ‘metaphysics’. The only definition I have found that fits all cases is: a philosophical opinion not held by the present author’.” ― Bertrand Russell

22. “The biggest question, transcending physics and the realm of how he was able to do the extraordinary things he did, remained firmly rooted in the realm of metaphysics and begged an answer to why he could do these things.” ― Sol Luckman

23. “Science should have been about reason, but, instead, it chose to be a crude reaction and retort to religion, and that drove it down a catastrophic atheistic path. Had it not been for religion, science would have become what Leibniz always thought it should be: a union of the empirical and rational, of the physical and metaphysical, with the rational and metaphysical being the dominant partners.” ― Mike Hockney

24. “In the beginning, there was nothing, which exploded.” ― Terry Pratchett

25. “Science is not only compatible with spirituality; it is a profound source of spirituality.” ― Carl Sagan

26. “There’s a limit to my patience with anything that smacks of metaphysics. I squirm at the mention of “mind expansion” or “warm healing energy.” I don’t like drum circles, public nudity, or strangers touching my feet.” ― Koren Zailckas

27. “The person who wishes to attain human perfection should study logic first, next mathematics, then physics, and, lastly, metaphysics.” ― Maimonides

28. “Energy defines life, not flesh and blood. We are infinite energies experiencing infinity. Through a finite aperture.” ― Stanley Victor Paskavich

29. “God is not only something metaphysical but also the physical world, the plants and animals, the mountains and rivers, the air and the sun and the earth.” ― Jeffrey R. Anderson

30. “Reality is non-directional, layered, and potential- all things at once and non-real in the sense that really is an unknown, so “real” is undefined and can not be experienced. Only your experience can be experienced, and that does not encompass everything or anything.” ― Laren Grey Umphlett

31. “In fact, meta- and particle physicists have more in common than one might suppose: both tug, if in slightly different directions, at the knots which hold the cosmos together, both look beyond the immediate world of sense perception into one where the cause can only be deduced from effect – a quark is as invisible as an angel; both are confronted by Manichaean polarities – miracles and black magic, cheap energy versus total destruction.” ― Tim Mackintosh-Smith

32. “Like the positivists, Wittgenstein was hostile to metaphysics. But he attacked metaphysics not with a blunt instrument like the verification principle, but by the careful drawing of distinctions that enable him to disentangle the mixture of truism and nonsense within metaphysical systems. ‘When philosophers use a word—‘‘knowledge’’, ‘‘being’’, ‘‘object’’, ‘‘I’’, ‘‘proposition’’, ‘‘name’’—and try to grasp the essence of the thing, one must always ask oneself: is the word ever actually used in this way in the language which is its original home? What we do is to bring words back from their metaphysical to their everyday use.” ― Anthony Kenny

33. “We live in the world, but we are not of it. Our consciousness cannot have an indecisive foot in both worlds. It must know where we reside. Make no mistake. One of those worlds will carry our home address. Whichever one it is will determine our life. It is best to choose the higher world and visit the other one with as much dignity, compassion, and love as we are capable of.” ― Donna Goddard

34. “In periods when shallow speculation is rife, one might think that metaphysics would shine forth, at least, by the brilliance of its modest reserve. But the very age that is unaware of the majesty of metaphysics likewise overlooks its poverty. Its majesty? It is wisdom. Its poverty? It is a human science.” ― Jacques Maritain

35. “Every belief that you hold manifests itself in some manner by either causing you to take some form of action or by preventing you from taking action. If you don’t believe something is possible, you won’t even attempt it.” ― Chris Prentiss

36. “The conscious events that we are aware of our physical events in their own right, just as much as the brain events observed in the lab by researchers. If we allow the mind its own existence as a category disjoint from the physical, we will never be able to get it back in.” ― William Hirstein

37. “Quantum jumping is the process by which a person envisions some desired result or state of being that is different from the existing situation—and by clearly observing that possibility and supplying sufficient energy, makes a leap into that alternate reality.” ― Cynthia Sue Larson

38. “The “affirmation” of God, is therefore related to mythical consciousness, but this consciousness is only “provisional” There would vanish the propensity to construct “fictions” and “fables” in which gods and ghosts are introduced to justify matters that can be scientifically explained. We accordingly refuse God’s “affirmation” because we want to speed up the birth of scientific consciousness.” ― Kiran Atma

39. “Scientism today is doing what the church did in the fifteenth century: forcing theory to fit a predetermined metaphysics.” ― Bernardo Kastrup

40. “Metaphysics in philosophy is, of course, supposed to characterize what is real – literally real. The irony is that such a conception of the real depends upon unconscious metaphors.” ― George Lakoff

50 Theology Quotes For Exploring the Depths of Divine Wisdom

22 Quotes on Understanding the World and Our Place in It