50 Famous Aeschylus Quotes to inspire you 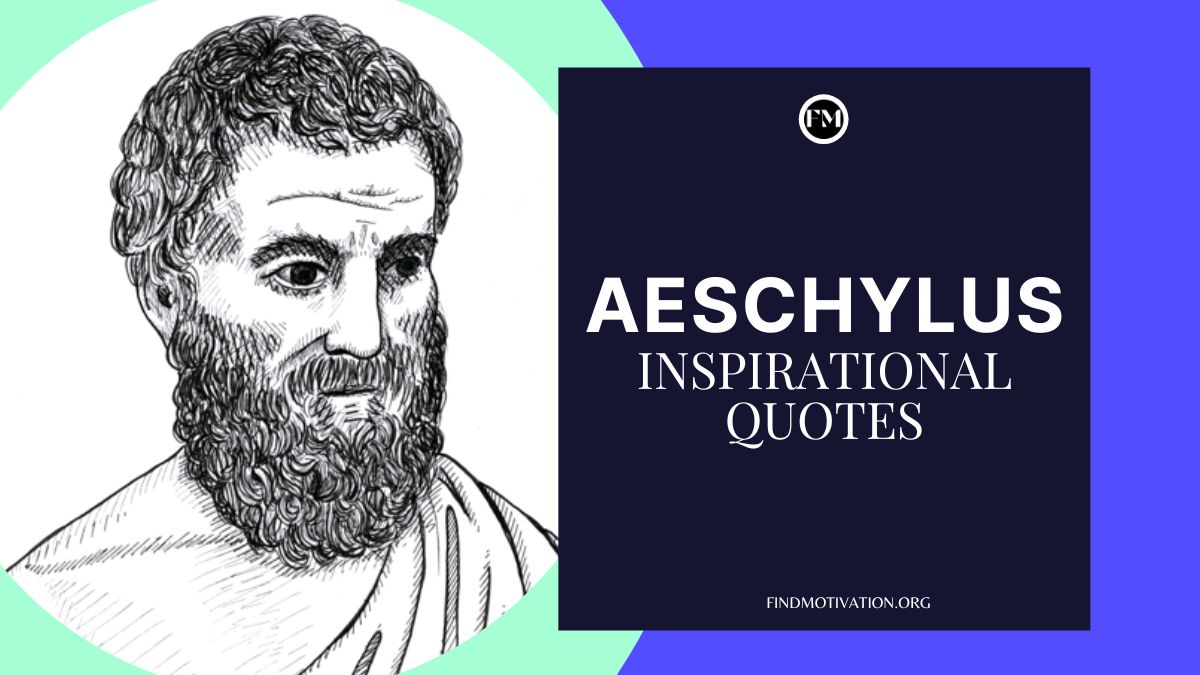 Find here some best inspirational Aeschylus Quotes that will help you to find some motivation for your life.

Aeschylus was a famous Greek tragedian who is often described as the father of tragedy. Let us tell you that tragedy is a genre of drama based on human suffering. It is mainly based on the terrible or tragic events of the life of the main character of the play. Academic knowledge of this genre began with his work, and the understanding of earlier Greek tragedy is largely based on inferences made from reading his surviving plays.

Before Aeschylus, the characters in the play only interacted with the chorus. According to Aristotle, Aeschylus with his knowledge expanded the number of characters in the theater and created characters full of conflict between them. Here we have collected some best inspirational Aeschylus Quotes to find some motivation.

Some questions and answers

Aeschylus was a famous Greek tragedy who invented the “tragedy” style of play.

When was Aeschylus born?

Aeschylus was born in c. 525 BC. Some scholars argue that his date of birth may be based on counting back forty years from his first victory at the Great Dionysia.

Where was Aeschylus born?

Aeschylus was born in Eleusis. Eleusis is a small town about 27 km northwest of Athens, in the fertile valleys of western Attica.

What was the cause of death of Aeschylus?

1. “Obedience is the mother of success and is wedded to safety.” ― Aeschylus

2. “Search well and be wise, nor believe that self-willed pride will ever be better than good counsel.” ― Aeschylus

3. “Self-will in the man who does not reckon wisely is by itself the weakest of all things.” ― Aeschylus

4. “God always strives together with those who strive.” ― Aeschylus

5. “Destiny waits alike for the free man as well as for him enslaved by another’s might.” ― Aeschylus

7. “Of all the gods only death does not desire gifts.” ― Aeschylus

8. “It is an easy thing for one whose foot is on the outside of calamity to give advice and to rebuke the sufferer.” ― Aeschylus

11. “And one who is just of his own free will shall not lack for happiness, and he will never come to utter ruin.” ― Aeschylus

12. “Know not to revere human things too much.” ― Aeschylus

13. “I willingly speak to those who know, but for those who do not know I forget.” ― Aeschylus

14. “Happiness is a choice that requires effort at times.” ― Aeschylus

20. “Whoever is new to power is always harsh.” ― Aeschylus

24. “Even in our sleep, pain which cannot forget falls drop by drop upon the heart until, in our own despair, against our will, comes wisdom through the awful grace of God.” ― Aeschylus

25. “Wisdom comes through suffering. Trouble, with its memories of pain, Drips in our hearts as we try to sleep, So men against there will Learn to practice moderation. Favors come to us from gods.” ― Aeschylus

26. “For it would be better to die once and for all than to suffer pain for all one’s life.” ― Aeschylus

27. “You patronize me like some little woman with no mind to call her own. I speak with a heart devoid of fear to those with wit to understand, and you can praise me or condemn me as you like, it’s all the same to me.” ― Aeschylus

28. “Words are doctors for the diseased temper.” ― Aeschylus

29. “They came back To widows, To fatherless children, To screams, to sobbing. The men came back As little clay jars Full of sharp cinders.” ― Aeschylus

30. “Horror gives place to wonder at your true account; The rest outstrips our comprehension; we give up.” ― Aeschylus

31. “I have learned to hate all traitors, and there is no disease that I spit on more than treachery.” ― Aeschylus

32. “It is in the character of very few men to honor without envy a friend who has prospered.” ― Aeschylus

33. “From a small seed a mighty trunk may grow.” ― Aeschylus

35. “It is easy when we are in prosperity to give advice to the afflicted.” ― Aeschylus

36. “The man whose authority is recent is always stern.” ― Aeschylus

37. “God lends a helping hand to the man who tries hard.” ― Aeschylus

38. “In the lack of judgment great harm arises, but one vote cast can set right a house.” ― Aeschylus

39. “When a match has equal partners then I fear not.” ― Aeschylus

40. “There is no pain so great as the memory of joy in present grief.” ― Aeschylus

41. “There is no sickness worse for me than words that to be kind must lie.” ― Aeschylus

42. “You have been trapped in the inescapable net of ruin by your own want of sense.” ― Aeschylus

46. “Death is easier than a wretched life, and better never to have born than to live and fare badly.” ― Aeschylus

47. “Death is softer by far than tyranny.” ― Aeschylus

48. “Married love between man and woman is bigger than oaths guarded by right of nature.” ― Aeschylus

49. “The one knowing what is profitable, and not the man knowing many things, is wise.” ― Aeschylus

We hope you liked the above Aeschylus Quotes. Do not forget to mention your favourite line in the comment box below.

99 I AM Affirmations for Self-love, Self-esteem, and Self-confidence