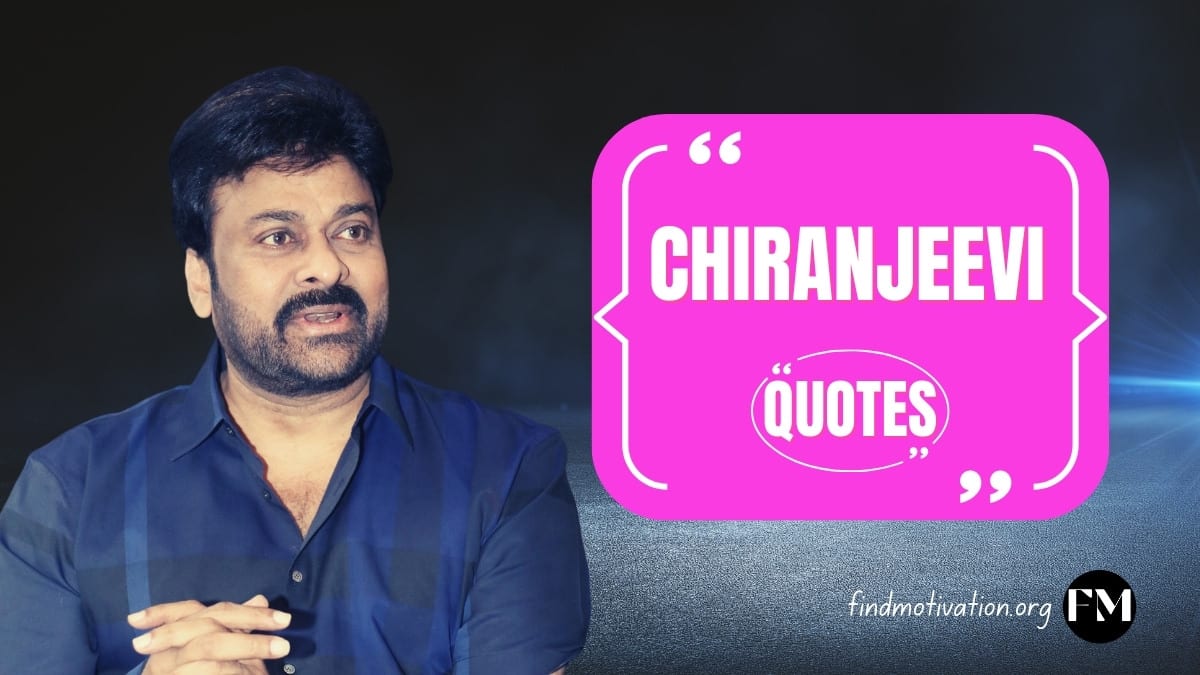 Read here Inspiring quotes said by Chiranjeevi that will help you to find motivation in your life.

Chiranjeevi is an Indian actor and politician who works in Telugu language films. His full name is Konidela Siva Sankara Vara Prasad but popularly known as Chiranjeevi. He has worked in more than 100 films in his film career. He is widely regarded as one of the most popular actors in the history of Indian cinema.

How was Chiranjeevi’s life journey?

Chiranjeevi was born on 22 August 1955 in West Godavari of Andhra Pradesh. His father Venkat Rao Konidela was a constable. After his graduation, Chiranjeevi moved to Chennai and joined the Madras Film Institute in 1976 to pursue a career in acting. Chiranjeevi married Surekha in 1980, and he is the father of two daughters, a son. His son Ram Charan is also a popular actor in Telugu cinema.

Chiranjeevi started his acting career with the film Punadhirallu in 1978. His film Swayamkrushi was dubbed into Russian and screened at the Moscow International Film Festival in 1987. Chiranjeevi won the 1988 Indian Express Best Actor Award and the state Nandi Award for Best Actor awards for his performance in the film. He won the National Film Award for Best Feature Film on National Integration for the film Rudraveena in 1988. Chiranjeevi’s film Gharana Mogudu was screened at the 1993 International Film Festival of India in the mainstream section. It made Chiranjeevi the highest-paid actor in India.

What has Chiranjeevi achieved in his life?

Chiranjeevi has achieved many successes in his film career. Such as:

Read below motivational quotes said by Chiranjeevi on various topics to find motivation.

1. “The tourism ministry may not have been the greatest portfolio, but no one can say that ‘Chiranjeevi left without doing anything. I have left my mark, as promised.” ― Chiranjeevi

2. “It so happens that after a certain stage, we have to give in to the wishes of the people rather than our own satisfaction.” ― Chiranjeevi

3. “I look at it as my responsibility to satisfy the wishes of the people more than mine.” ― Chiranjeevi

4. “Self-control is needed in the age of technology.” ― Chiranjeevi

5. “Folks have to apply their sense in reacting to different things.” ― Chiranjeevi

6. “I don’t appreciate a perverse and venom-spewing mindset.” ― Chiranjeevi

7. “I don’t compare myself with the late NTR, but I want to give livelihood to people. He was pro-poor, and people want me to substitute him and bring a change, and I will do that.” ― Chiranjeevi

8. “One had sown the seeds of corruption, and the other watered and nurtured it.” ― Chiranjeevi

9. “I always believe holidays strengthen the family bond, away from our daily hectic schedules.” ― Chiranjeevi

10. “More than the hits flops will have an impact on my career. In fact, flops helped me shape my career. They made me look at things from a different angle.” ― Chiranjeevi

11. “Tourism in India has the potential to promote faster, sustainable, and more inclusive growth. It could be used as a powerful antidote to tackle poverty.” ― Chiranjeevi

12. “I used to do some philanthropic work, but with the political platform, I can contribute in a bigger way.” ― Chiranjeevi

14. “You have to be very guarded about your personal behavior, future plans, etc.” ― Chiranjeevi

15. “I want to serve the people with humility and sincerity.” ― Chiranjeevi

16. “In totality, I take care not to be a bad influence on youngsters.” ― Chiranjeevi

17. “One wants to entertain the audience till the end. Sometimes, the desire is never dying.” ― Chiranjeevi

18. “The caveat is that one has to be watchful of public reception.” ― Chiranjeevi

19. “God has given me so much, and if there’s one thing I really want to do, it’s to serve the people.” ― Chiranjeevi

20. “I have made it a point to reach out to the masses personally – so I am there as a symbol for the masses.” ― Chiranjeevi

21. “Once I am done with the film, I don’t worry about how many centers the film has released, what are the BO records, etc. As I have no knowledge of such things, feeling the pressure doesn’t arise.” ― Chiranjeevi

22. “I have no regrets about going into politics or leaving Tollywood for a while.” ― Chiranjeevi

23. “I’m not an ambitious person. I’m very content, and I have no pending dreams.” ― Chiranjeevi

25. “Politicians have made use of peoples’ votes but do not care for them.” ― Chiranjeevi

26. “I assure you the door to politics is never closed. Whatever medium is necessary to reach the masses, I will take that – be it cinema or politics.” ― Chiranjeevi

Final Words: I hope you liked the above Chiranjeevi Quotes. Don’t forget to mention the best line that you liked most from the above lines in the comment box below.

26 Akkineni Nagarjuna Quotes to help you to find motivation